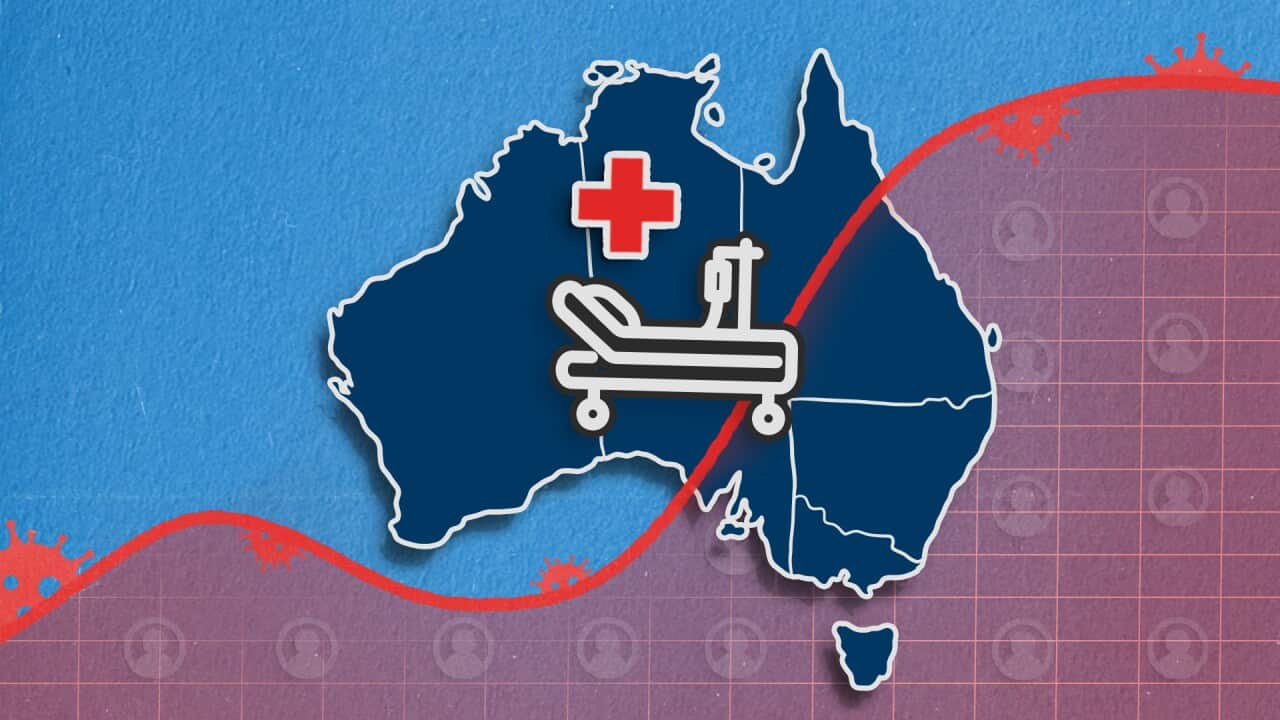 The interactive graphic below shows the COVID-19 hospitalisations in each state and territory, including in ICU, and how vaccination rates have had an impact.

Published Wednesday 22 December 2021
Source: SBS News
With COVID-19 cases having risen across Australia amid the spread of the Omicron variant, so too have hospitalisations.

So where are we now and how is the country’s healthcare system coping?

Case numbers have increased in most states and territories, particularly in New South Wales and Victoria, but many more people are now vaccinated and some have received booster shots.

Advertisement
While Omicron continues to show greater infectivity than the Delta variant, it is less severe in terms of hospitalisations, intensive care and ventilated patients.

The interactive graphic below shows the number of COVID-19 cases admitted to hospitals across each state and territory from June this year alongside case numbers and vaccination milestones.

It is updated automatically each day and is followed by analysis on what the data currently tells us and what could happen next.

What has happened with hospital admissions?

By early January 2022, NSW and Victoria were recording 20,000 to 30,000 daily cases and hospitalisations were climbing.

According to the federal health department figures used in the graphic, there were 129 people in NSW hospitals who had the virus (not including in ICU) and 25 others in ICU on 1 December, when the state had 251 cases (the graph shows a seven-day average of 215).

Hospitalisations were also rising in other states during this time, mainly in Victoria, and increasingly in Queensland and South Australia.

What does all this mean?

Concerns were raised about the strain the surge of infections could place on the country’s hospital system in 2022.

Speaking to SBS News in mid-January, John Kaldor, an epidemiology professor at UNSW’s Kirby Institute said while hospitalisations and intensive care admissions were still growing, it was happening at a lower rate than what might have been predicted.

“It’s certainly not tracking the worst case scenario; it’s probably much closer to the more optimistic ones,” he said.

“But it’s really important to remind ourselves that this still means a lot of people are getting sick, a lot are in hospital and a reasonable number are still requiring high levels of care.”
READ MORE
Where can I go and what is the travel advice for each country?
Prime Minister Scott Morrison said on 27 January Omicron continues to show greater infectivity than Delta, but with much less severity in terms of hospitalisations, ICU and ventilated patients.

Professor Kaldor said the vast majority of infections have been in the teenage and young adult age groups - though this is now shifting towards older groups.

“We know the vast majority of people won’t experience severe outcomes - even in older age groups, it’s still a minority of people who will get serious outcomes. But we still know relatively little about who that’s going to be at an individual level.”

What does the data tell us about why vaccinations matter?

Professor Kaldor said the burden of severe disease in a highly vaccinated population is falling more heavily on those who are unvaccinated.

“That’s what we would have expected,” he said.

He said it’s probably still too early to assess the extent to which booster shots are providing additional protection, but overseas data indicates for those who are vulnerable, they’re “a good way to go”.

Mr Morrison said on 10 January those who were in hospital were predominantly unvaccinated - an indicator also acknowledged repeatedly by NSW Premier Dominic Perrottet.

"If we look at ICU numbers, if we look at hospitalisation numbers, there is no doubt, no doubt, it is very clear, that vaccination is key to keeping you safe," he said on 9 January. '
READ MORE
What are the COVID-19 vaccination rates in your local area?

Can our health systems cope?

Mr Morrison said one of the government’s main objectives is ensuring that “we can keep our hospitals under the least pressure that can possibly be put on them, that we can maintain the strength of our hospitals through this pandemic”.

“We recognise that, of course, our hospitals and our health systems are under significant strain at present. That is unavoidable when you have a pandemic operating at this scale with this latest variant of the virus.”

Mr Morrison said on 13 January “we are continuing to manage the number of cases coming into hospitals within those tolerances”.

“It’s not easy. It’s putting a lot of pressure on people. But it is being achieved and that remains an important object for all of us as we continue to manage this pandemic.”

The federal government announced the activation of an agreement to make private hospital staff available to help COVID-affected areas.

Separately, the Victorian government declared an emergency across all Melbourne hospitals, and six regional ones, as the Omicron wave impacted health services. The so-called ‘Code Brown’ order means some hospital staff can be recalled from leave and non-essential care can be deferred.
READ MORE
Victoria has declared a 'Code Brown' COVID emergency. Here's what that means
"This is the first time the health system has come under pressure to the extent that we're seeing in the last week or two," Chief Medical Officer Professor Paul Kelly said on 18 January.

Professor Kaldor said answering this question of whether Australia can cope has several parts; the raw data when it comes to hospital beds and ICU places, and the workers who are providing care.

“From a health facility point of view … we are not at capacity by any means,” he said.

“On the other hand, there’s the actual perception about healthcare workers. Anecdotally, there are few workers on the frontline who aren’t feeling incredible pressures because of the workload they’re being asked to shoulder, due to the depletion of that workforce through COVID-related absences.”

Finally, there are those who are receiving care.

“At another level, there is the actual illness and health experience of people who are facing those serious health consequences, and their family and friends. Even if that number is not the horrendous number we might have expected had we not had high levels of vaccine coverage.”

See more
COVID-19 interactives
below:
READ MORE
How many people have died from COVID-19 in countries around the world?
Which countries are winning the COVID-19 vaccine race?
Where can I go and what is the travel advice for each country?
Share