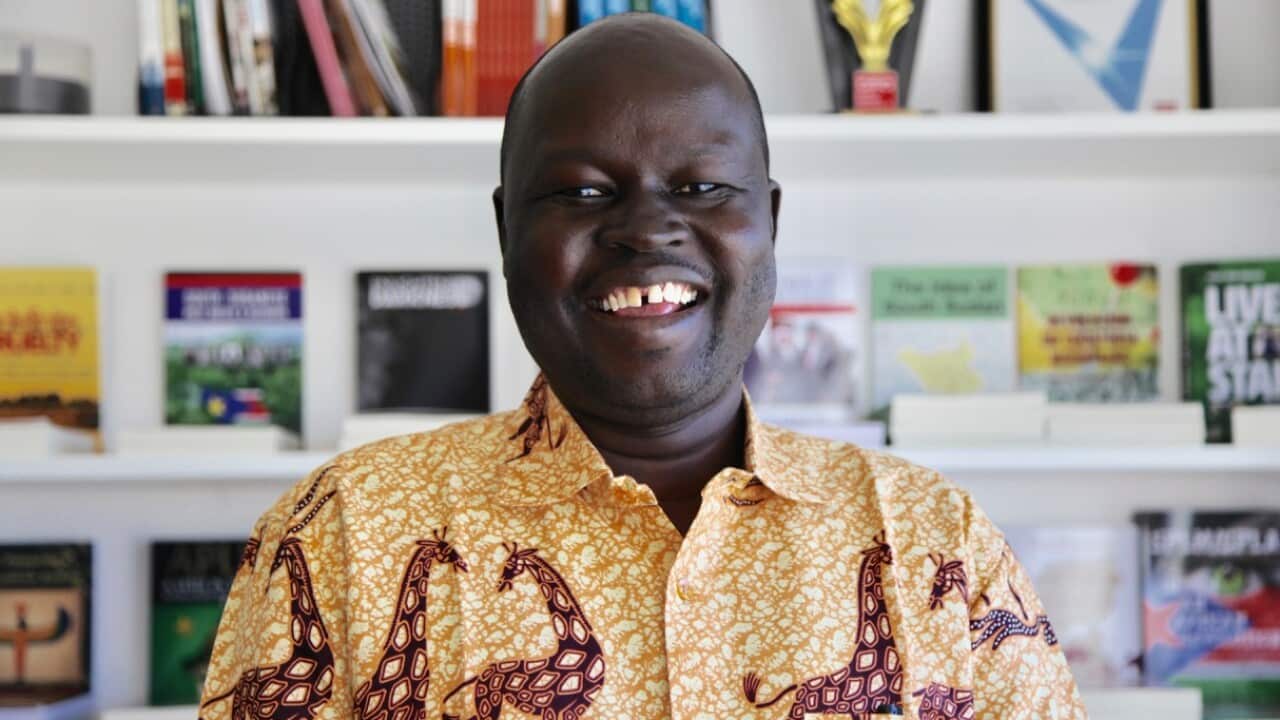 Peter Deng came to Australia as a refugee from southern Sudan after spending a decade in a Kenyan refugee camp. He has now established an independent book publishing company at the centre of a worldwide boom in African literature.

Published Sunday 14 June 2020
By Aaron Fernandes
In a small second-story office on a Perth industrial park, Peter Deng unpacks a box of books and lays them out one by one.

The titles all speak of a place a world away.

Jungle Chronicles by Atem Yaak Atem, a South Sudanese journalist now living in Australia ... Being a Girl in Jieng Society by Daniel Mamer, about the challenges facing women and girls in traditional societies ... And Aspects of Dinka Noun System, a resource for learning the language of the major ethnic group of South Sudan.

Advertisement
Peter looks over the books thoughtfully then slips them each into envelopes and places them by the entrance, waiting to be collected.

Running an independent book publishing company is not what he planned to do when he came to Australia as a refugee in 2006. But it is work Peter truly believes can make the world a better, more understanding place.

“Today, there are thousands of people still in those refugees camps [in Africa]. But because they weren’t given the chance, they aren't able to do what I’m doing now,” he tells SBS News.

Peter grew up in the village of Wangulei in southern Sudan, in an area formerly known as the Greater Upper Nile province. Like his grandfather and great-grandfather, his father Reech Deng was a tribal chief, the dispenser of customary law.

"My dad used to have court cases under the tree, I used to sit next to him. People would sit in a group discussing matters ... the village is still pretty much the same now, nothing has changed," he says.

Peter grew up in southern Sudan and came to Australia after spending 10 years in a Kenyan refugee camp. Source: Supplied

But when Sudan’s second civil war broke out in 1983, the region was hit with famine and the constant threat of bombardment. People, including children, were abducted, and cattle, a source of life, slaughtered.

By the mid-1990s, Peter's father had left the village to try and find those who had been taken, but he never returned.

Learning of his father's death, Peter was forced to flee the country.

“We were in an area called ‘the hunger triangle’. About 140,000 people were trapped in there,” he says. “We were surrounded by war. People were fed on by birds. Whole families were wiped away.”

Like tens of thousands of others, he crossed the border into Kenya, eventually arriving at Kakuma Refugee Camp.

Peter’s mother stayed in Sudan. When she died, it took three months for news of her passing to reach him in Kakuma.

“Because of the war, I lost my dad and my mum. But still, I’ve got a family living back in Africa. I’m the only one that left.”

After being sponsored to complete secondary school in the camp by a Norwegian aid worker, Peter spent the next 10 years of his life in the camp. In 2006, he was granted a refugee visa to come to Australia through the United Nations resettlement program.

“Because I was born in the village, there is no record [of my age]. Maybe I was about 27 when I came to Australia, but I don’t know if it's exact,” he says.

“Before I left Nairobi, I had a dream. My mother and father came to me and everything was bright light. They said to me, ‘Peter, do you see anything dark?’ I said 'no', and they told me to go.”

Peter’s first taste of life in Australia came in the regional Western Australian town of Northam, where he spent two weeks at the home of an Australian couple he met at the airport.

From there, he moved to Melbourne, home to Australia’s largest South Sudanese diaspora, and completed a degree in international business at the University of Victoria.

He graduated in Australia days after South Sudan achieved independence in 2011, presenting a traditional stick and a plaque of South Sudan to the crowd and pledging to bring the two countries closer together.

“If we are settled in Australia and become only beneficiaries without contributing back to the system, then there is a chance the system can collapse,” he says.

After a few years in Australia, Peter began to learn of books about South Sudan being printed and circulated in the northern hemisphere. One of the books, South Sudan’s Struggle for Liberty, mentioned Peter’s father and the role he played as a tribal chief.

But there were few people in Australia’s South Sudanese community who knew where to find it.

The book details the experiences of Peter's great-grandfather, who died in 1932. Source: Aaron Fernandes, SBS News

A second book, a collection of anthropological essays titled The Upper Nile Province Handbook, described Peter’s grandfather. The book was published by Oxford University Press but had been out-of-print for several years. Purchasing a copy would cost $300.

“I bought about 40 copies, the few copies that they had in stock, and had them sent to Melbourne," Peter says.

The book proved to be a hit in Australia.

“Everyone was scrambling, asking ‘where can we get this book?’ Because all our leaders and elders from the Upper Nile, including my great grandfather who died in 1932, they were all mentioned there.”

“Because we used to hear about them, but we never obtained any written material.”

Traditionally, the 64 different tribes of South Sudan have been largely oral cultures, passing on history and knowledge through stories and song.

“So I said, ‘OK, this book is out-of-print and all the great-grandchildren [in Australia] need it.”

Peter called the Oxford University historian Douglas Johnson, and soon after secured the rights to publish the book himself in Australia.

“I worked myself as an academic publisher for 15 years, so was able to offer him a little advice on setting up a specialist publishing company,” Dr Johnson tells SBS News.

“Because of the way books are now produced, they don’t have to be produced in the hundreds and warehoused someplace.

“They can, through digital technology, be printed in individual copies around the world, and through online retail can be sold to anybody.”

With the right motivation and tutelage from Dr Johnson, Peter founded his own book publishing company.

Africa World Books, based in Perth, specialises in books about the history of South Sudan and issues of interest to the diaspora in Australia and around the world.

“I thought that it is a good idea to make this information available to families that fled the country. Their children are growing up here, so they need information that they can teach,” Peter says.

“Another factor is that Australians are good people, but they don’t know who we are, where I came from, what my culture is. Because there was nothing much written about South Sudan.”

Manyang Deng is the Western Australian author of a series of eight children’s books, which he wrote to help his own children speak and understand Dinka.

The books are in demand among South Sudanese around the world. Source: Aaron Fernandes, SBS News

“In my experience, I’m always at work and they’re at school. To make matters worse, there were no written materials available if I wanted to teach them my language,” he says.

“So that gave the interest for me to write those books for my children, and also for my colleagues. We’ve got many Dinka families in Australia and the children are struggling to learn our language.”

Many of Deng’s books are now in the State Library of Western Australia. His daughter has also published her own book through Africa World Books and has plans for a second.

“That is the difference with Africa World Books and the other companies. Who else could publish those small booklets? We did it as a community service and to encourage this oral society.”

Since starting Africa World Books, Peter has had to innovate to ensure production costs are kept low.

“In order for a book to be economical, we had to print a couple of hundred copies, which was a burden,” Peter says.

“Now we make books available online to be printed on demand. Our books are listed on about 38,000 distribution outlets worldwide … you can get it from Amazon or Booktopia.”

The demand for literature written by South Sudanese authors and for South Sudanese readers has made Africa World Books the focus of international attention.

Richard Vokes, an anthropologist and Africanist at the University of Western Australia says: “I was in the South Sudanese refugee camps in northern Uganda in March this year, which are among the largest refugee camps in the world,” and there he found stacks of publications by Africa World Books being collected.

And the global interest doesn’t stop there.

“I was looking for the best Dinka language materials from here in Perth and had contacted South Sudan experts all around the world to try and find some,” Associate Professor Vokes says.

“Eventually, a scholar at Oxford reached out to me and said, ‘there’s a guy in Australia. His name is Peter Deng”.

Before history is lost

Now, Peter’s focus is on capturing the stories of older generations of South Sudanese-Australians.

“Those who fought the war are ageing. Already some of the authors are gone. What would have been the situation if they went without sharing their stories with us?” he says.

Abraham Jok Mabok is a community leader in Western Australia and planning to write his own memoirs.

He completed primary school in Sudan in 1956, but his education was cut short by the first Sudanese civil war.

“I had to fight after graduation until 1972. After that, we reached an agreement and the civil war was over, we came to peace,” he says.

“That period gave me an opportunity to marry in 1974, but then war began again in 1983. I had to go to the bush with my children.”

For the next 21 years, Mr Mabok fought in Sudan’s second civil war, until he came to Australia as a refugee in 2004.

“I looked for resettlement in a place where my children could get an education. We were deprived for almost 21 years without education.”

The family resettled in the Perth suburb of Girrawheen and Mr Mabok enrolled his children in a local school.

“I used to remain alone in the house while the children were at school. That didn’t suit me”.

Mr Mabok decided to enrol himself in university, but first he had to complete two years of bridging programs.

In 2007, he began studying for a Bachelor Degree in Community Development at Murdoch University, completing his degree in 2014, and enrolled directly in a post-graduate course.

Mr Mabok then went on to enrol in a master's degree, completing that course in 2019 at the age of 75.

“The reason that I did that was to compensate the loss of my education [in Sudan],” he says.

Peter is committed to continuing the work of Africa World Books, which he says is about "more than money".

But sustaining an independent book publishing company has its challenges, and the publications come at the hard work and sacrifices of authors and editors around the world, he says.

Peter aims many of his books at service providers in Australia. Source: Aaron Fernandes, SBS News

“Most of our authors don’t have the financial capacity [to dedicate themselves to writing] because of the war back home.”

“Our editors are doing a wonderful job, sacrificing their time. To be honest, the team of writers and editors have suffered.”

But he is optimistic about the future, as knowledge and understanding of South Sudanese customs continue to spread in Australia.

“I was called by lawyers in Melbourne to get information about customary law in South Sudan. If we want to help Australian service providers, we should make materials available so they can understand how things are dealt with culturally.”