On International Day of People with Disability, a mother of three boys who were born profoundly deaf tells SBS News how advancing technology and an early intervention program in Australia has seen her children flourish. 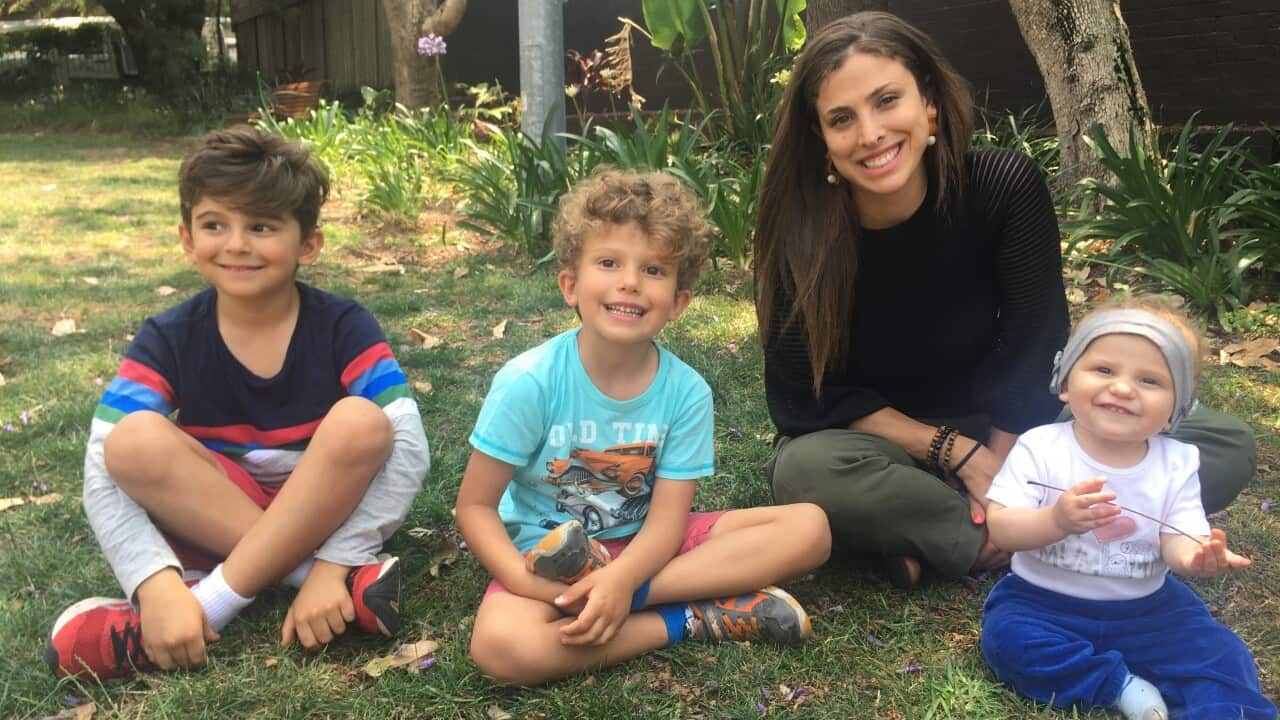 Sydney woman Renata Reis had all the usual hopes when she was pregnant with her first child.

But when Rafael was born, he came with a unique challenge. He was profoundly deaf.

Advertisement
“We don't have anyone in the family with hearing loss so it was very unexpected, very shocking news,” she said.

Renata and her husband were told they shared a recessive gene and there was a one in four chance any future children they had would also be deaf.

Their second and third babies, both boys, were also born with the same condition.

"If you think ‘there’s a one in four chance,’ we're thinking ‘what are the odds? We've done it once with Rafael, I'm sure it will be fine this time, but no’,” Renata said.

Her sons, Rafael, now seven, Gabriel, five, and 10-month-old Luca have all had surgery to be fitted with cochlear implants in their ears.

And to Renata’s delight, it has meant they can hear almost everything, as well as be able to talk and sing.

Renata also attributes their successes to The Shepherd Centre, a world-leading early intervention program that teaches children who are born deaf or hearing impaired how to develop spoken language.

Following in his older brother’s footsteps, Gabriel has just graduated from the centre’s school preparation program that gives hearing-impaired children the skills, confidence and support to help them enter mainstream schools. Baby Luca is also taken to classes there.

The program has been so successful that Renata took on the challenge of teaching her sons Portuguese - her first language - which Rafael and Gabriel can now speak fluently.

"By six months of age, if we're unable to provide them with the right hearing devices, their brain has already retracted so much that they can have permanent delays in their language.’’

“So it's incredibly important for people who've got a child who might have a hearing loss to seek urgent help as early as possible."

In Australia, deafness affects one in every 1,000 babies at birth and one in every 300 children by school age due to developed hearing loss.

A
2017 report by First Voice
on education, employment and the social outcomes of Australians with hearing loss showed about three in five children with a hearing impairment who receive early intervention go on to achieve a tertiary level qualification, compared with only two in five of the general population.

With more than 700 children enrolled across five centres, not-for-profit organisation The Shepherd Centre helps children in New South Wales, the ACT and Tasmania through it listening and spoken language therapy.

Funded partly by the government, and through private donations, it is free for any family that needs it and provides classes for children as young as six months, as well as for parents.

‘Hearing loss will not be a barrier’

Dr Hungerford, who has worked at The Shepherd Centre for a decade, said the advances in technology and therapy have transformed the outlook on life for deaf children.

“In years gone past, a child with hearing loss may not perhaps ever been able to speak, often would never be able to go on to school or achieve in school as they should,” he said.

Rafael and Gabriel are now both fluent in Portuguese. Source: Amelia Dunn/SBS News

When asked whether Australia has done enough for children with disabilities including deafness, Dr Hungerford said there is room for improvement.

He said even small things, such as the design of a classroom, can hugely impact a student’s learning experience.

“A lot of schools are moving to open-plan classrooms. They don't realise all of the echoes and the noise makes it very difficult for all children to hear, let alone children with hearing loss.”

“So we need to make sure we design for inclusivity.”

“They've got to concentrate harder so it's quite challenging in the classroom, depending on the size of the classroom, or number of children, different things like that can impact,” she said.

But she praised the way Rafael’s public school have embraced him and been willing to take on the extra responsibilities.

“The school that we attend, they have been so welcoming and supportive of his disabilities,” she said.

“The teachers have received extra training, they were able to accommodate different changes in the classrooms, and bring in different technologies.”

Renata said the early intervention program at The Shepherd Centre has been life-changing for her children and has prepared the boys to live a normal life.

"They speak beautifully, they're very social, so I have no doubt, their hearing loss will not be a barrier. I know they'll be able to achieve whatever they want."