There was a record number of Islamophobia hate crimes across the UK in 2017. 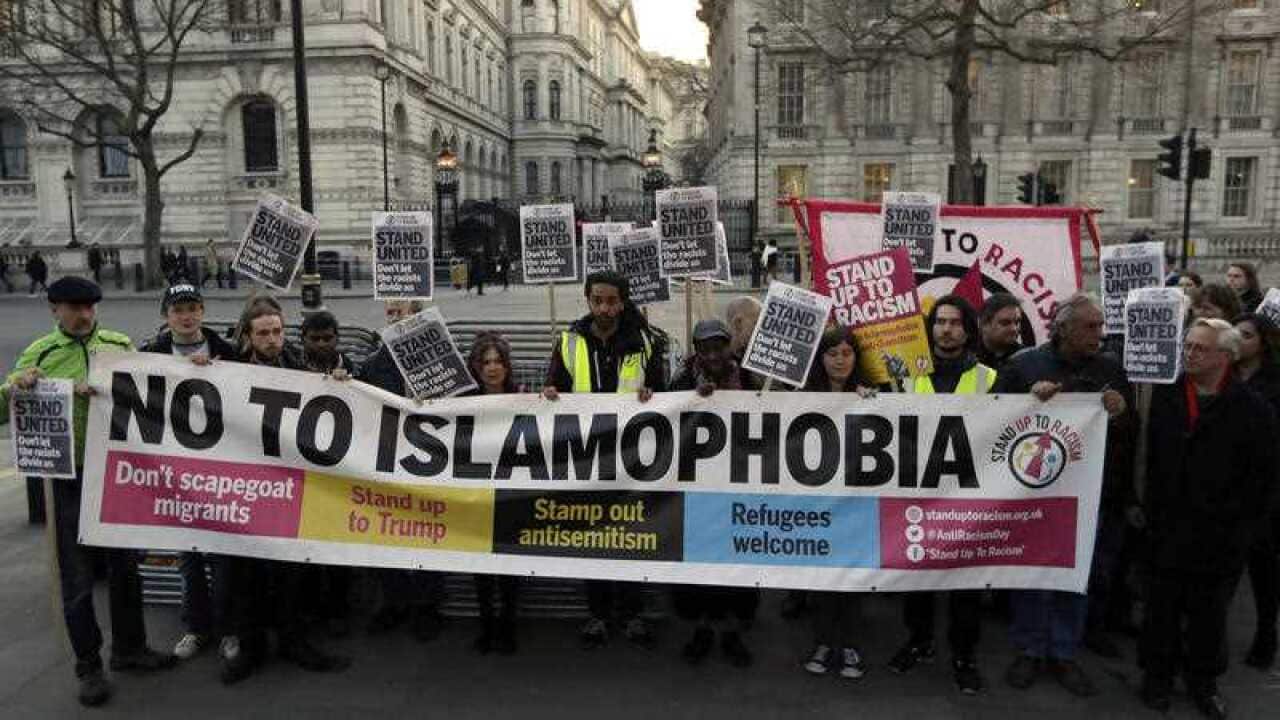 People hold up a banner during a 'Unity Vigil' against racism and Islamophobia in reaction to Wednesday's attack, backdropped by the gates of Downing Street. Source: AP

A growing body of research points to the proliferation of Islamophobia
across Europe
in recent years. In the UK, record numbers of Islamophobic hate crimes
were recorded in 2017
, and
across the continent
there have been similar findings on the growth of explicit Islamophobia.

In a new, pan-European
research project
, my colleagues and I set about to devise a
toolkit
that can be used to counter Islamophobia. It summarises a range of the best methods and tools we saw being used to challenge Islamophobic thought and actions in Europe.

In any discussion about Islamphobia, a definition is required that acknowledges both direct forms of Islamophobic discrimination and also its more subtle, nuanced manifestations. A
definition
published by the All-Party Parliamentary Group on British Muslims in November 2018, which states “Islamophobia is rooted in racism and is a type of racism that targets expressions of Muslimness or perceived Muslimness” does precisely this and is a useful starting point.

In our research, we began by examining the most common Islamophobic ideas that circulated in eight countries: France, Belgium, Germany, the UK, Czech Republic, Hungary, Greece and Portugal. While the language and rhetoric of Islamophobia differed in each, we found much of it perceived Muslims, Islamic practices and sites, such as mosques or community centres, as inherently violent, threatening and incompatible with the view of a European way of life. For example, in France, wearing the headscarf and being visibly Muslim is viewed by some as being
against French secular values
and by extension contrary to being French.

We found many examples of good practice when counteracting Islamophobia. For example,
interfaith projects
in Germany highlighted conviviality and cultural compatibility between Muslims and non-Muslims.

Art was also used in a number of cases, including Belgium and the UK, to challenge Islamophobic ideas. The
Tuffix
comic strips by German artist Soufeina, and the 2017 British film,
Freesia
, highlight the contribution of Muslims in society, and the issues many Muslims face as a result of Islamophobia.

Based on our analysis, our toolkit highlighted some specific strategies that work to counter Islamophobia. Since a great deal of Islamophobia is based on the notion that Muslims threaten the European way of life, values and culture, one way to challenge these ideas is to highlight the many everyday roles Muslims occupy in society. And since we found that Islamophobic perceptions are often based on the idea that Islam and Muslims are sexist, projects that champion Muslim women, their work and their voices will go some way towards breaking down these preconceptions.

Muslim women are
disproportionately affected by Islamophobia
. They are not only seen as a threat to the West, but they are also paradoxically portrayed as victims of an alleged Islamic sexism. These contorted ideas must be overturned with new narratives, led by Muslim women themselves, presented via art, media and popular culture, to portray the diversity of their lives.

Islamophobia needs to be properly recorded to assess the scope and nature of the phenomenon, and the narratives and flawed logic used in Islamophobic attacks must be effectively deconstructed and challenged. Where misinformed narratives concerning Islam and Muslims circulate these must be broken down. A reconstruction of mainstream ideas surrounding Islam and Muslims is needed, one that is closer to the realities of the faith and its practice. This means that dominant ideas about Muslims and Islam that circulate in popular culture should reflect the diverse everyday experiences of Muslims and their faith.

All this amounts to a four-step approach: first defining, and second documenting Islamophobia, next deconstructing its narratives, and then reconstructing new positive and realistic narratives around Muslims.

Such an approach moves away from misinformed and often reactionary counter-Islamophobia strategies, such as the way Muslims repeatedly condemn terror attacks and seek to dissociate such acts from Islam. In doing so, they often find
their comments fall on deaf ears
and instead risk contributing to associations between Muslims and violence.

The ultimate goal in countering Islamophobia should be to create a fair and just society for all, one that values and safeguards the citizenship of its members.

The Counter-Islamophobia Kit project is funded by the European Commission's Rights, Equality and Citizenship programme (JUST/2015/RRAC/AG/BEST/8910)