Humans and chimpanzees: How we differ and why

In our quest to explain why humans are so different from the rest of the living world, our scientific gaze usually turns to examining the differences between our close living relative, the chimpanzee, and ourselves. 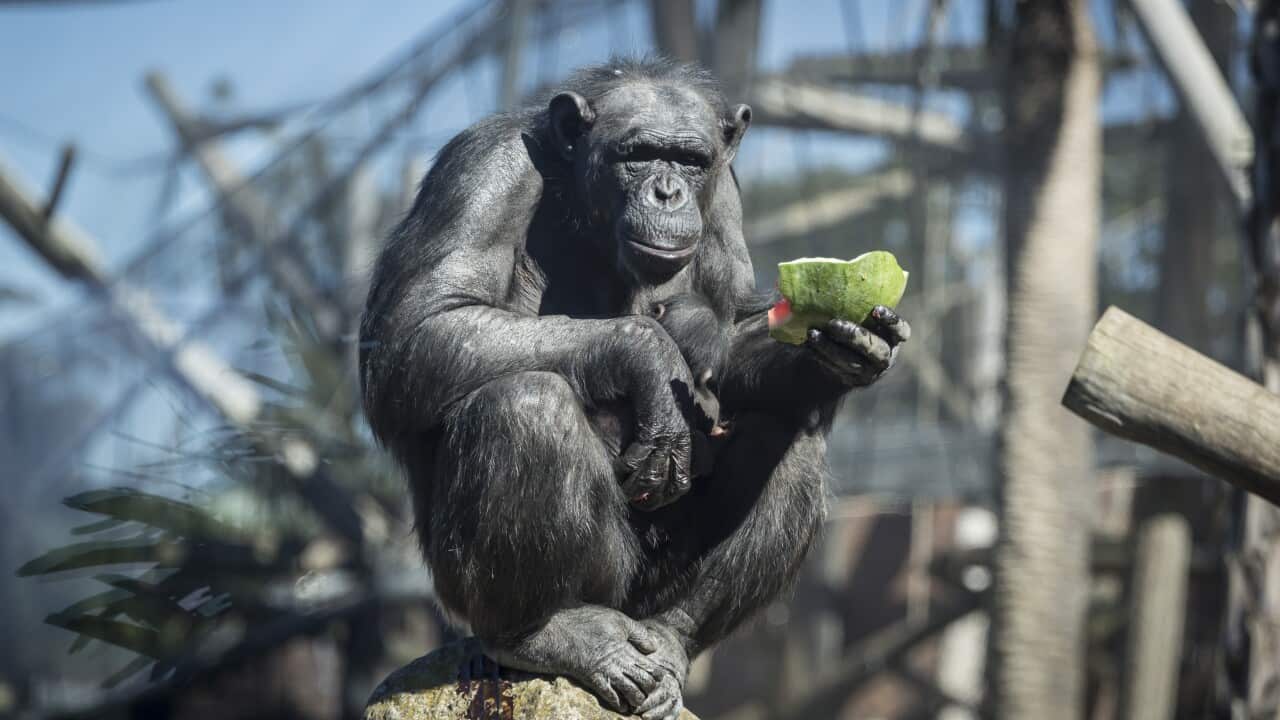 One of the most important questions we can ask – and one that continues to take up much of the time of scientists, philosophers and the religious minded alike – is why are humans so different to the rest of the living world?

Philosophers and physicists have even celebrated the appearance of humans 200,000 years ago on the African savannah as marking the arrival of consciousness or self-awareness for the universe.

Advertisement
But despite the remarkable promise and advances of science and technology over the past 155 years since Charles Darwin published his paradigm shifting book,
On the Origin of Species
, I find myself increasingly pessimistic about whether this riddle to end all riddles will ever be solved.

In our quest to disentangle it, our scientific gaze usually turns to examining the differences between our close living relative, the
chimpanzee
, and ourselves.

The behaviour of chimpanzees can appear so human.
Flickr/Tambako The Jaguar
,
CC BY-NC-ND

The physical and behavioural distinctions between us are obvious to all: pointedly, it is we who are destroying their habitat and threatening their very existence.

We share a common evolutionary ancestor with them some 7 or 8 million years ago – a mere ripple in the stream of time of Earth’s history – and more than reason enough to ensure their survival as a species.

Our genetic blueprint, our
genome
, is different by a mere 1-2% – barely enough to explain the “gap” between us.

Surprisingly, comparisons of our genomes have shown that chimpanzees have undergone more positive genetic change in their evolution than we have, undermining the widely held view that humans are dramatically different to other apes.

This also means that, despite its promise, our DNA now seems unlikely to provide a clear answer to this most important of questions.

One of the most obvious physical differences is our massive brain. A typical chimp brain is close to 400 grams in weight while a human one, on average, weighs almost 1.5 kilograms.

Geneticists have identified 15 genes differing between us that physiologically control our brain and nervous system.

Some of them probably underpin the profound changes in brain growth, size and function that set humans apart, but this remains unclear.

Fifteen genes is a very small number, bearing in mind the 21,000 genes present in our genome – most of which have no known function – and that seemingly ordinary differences between people such as stature are influenced by hundreds of genes.

Another major difference between us resides in our brawn. It is a well known fact among zoo keepers and conservationists of chimpanzees that these animals have been known from time to time to rip a persons’s shoulder out of its socket when angry.

Chimpanzees display a range of emotions.
Flickr/Afrika Force
,
CC BY

While the number, structure and function of their muscles is overall very similar to ours, there are a few important exceptions such as muscles involved in walking upright, chewing our food and the expression of emotions with facial gestures.

Our limb muscles are mostly are lot smaller and weaker than a chimp’s and their joints are adapted for much greater agility and more rapid and complex movements than ours.

In short, human limbs have evolved for terrestrial running, while chimpanzees' are adapted for arboreal climbing.

The differences in our chewing muscles obviously reflect our diets, with humans preparing our food using techniques such as cooking, a practice that may have begun a couple of million years ago among our Stone Age ancestors.

Another really interesting and long understood difference is in our muscles for facial expression, crucially used for non-verbal communication in both species. Charles Darwin, in his 1872 book
The Expression of Emotions in Man and Animals
, wrote about how important facial gestures were in distinguishing humans from other animals.

The human face is capable of a range of emotions - so too is a chimpanzee.
Flickr/Paolo Neoz
,
CC BY-NC-SA

Yet, recent research comparing these muscles has shown that earlier scientists exaggerated the differences between humans and chimpanzees. Our facial muscles are very similar in number and function - although not identical.

Chimpanzees do possess a very wide repertoire of facial expressions and gestures, but they are not as varied as ours. It seems that only humans express emotions such as disgust with our faces.

Facing the question with new energy

The seeming failure of genetics to explain “the gap” seems to be inspiring some rather novel ways to address the problem.

Fascinating new research by Katarzyna Bozek and co-workers
published in PLOS Biology
has compared the so-called “metabolome” of humans and chimpanzees with some surprising results.

The metabolome is the totality of small molecules produced in the body during metabolism (normal processes that occur within the cells).

They include amino acids, sugars, fats, vitamins, pigments, odorants, hormones and other signalling chemicals, enzymes and many others.

There are almost 42,000 such chemicals known for the
human body
and Bozek and colleagues compared 10,000 of them from five body tissues from the brain, kidney and muscle.

Importantly, they found that changes in these chemicals between species track evolution and reflect the amount of time and change between organisms since they shared a common ancestor.

Reassuringly, they found that the human metabolome for the brain, especially our frontal cortex, had changed four times more rapidly than in chimpanzees, reflecting major differences in brain size and function between us.

But the big surprise in their research was that human muscle metabolome had changed more than eight times as much in humans than in chimpanzees, hinting at major differences in the way our muscles work on the molecular level.

They very reasonably speculate that metabolism in the human brain and muscles could have evolved in tandem in such a way that the energy demands of our muscles reduced to allow our metabolically expensive brains to grow larger in evolution: shifting our body’s energy balance.

Alternatively, the shift in our ancestors to endurance running at much the same time that their brains began to enlarge may have forced a change in the major source(s) of energy used by the body as cellular fuel: perhaps relying much more on energy stored in body fat.

Undoubtedly, we still face a major chasm in knowledge about how we evolved to be so different to other apes, in the way we think and behave.

But new approaches like those comparing our metabolomes, made possible with recent development in fields like as biochemistry, offer powerful new insights that will add much to more traditional approaches such as anatomy, paleontology and genetics.

This is an edited version of an original post on
Walking on Two Feet
.

SHARE
7 min read
Published 13 June 2014 at 6:58am
By Darren Curnoe
Source: The Conversation