I never lied to anyone, says Allenby

Robert Allenby has stood behind his story, reiterating he is a victim, and says he has not lied to anyone after his ordeal in Hawaii. 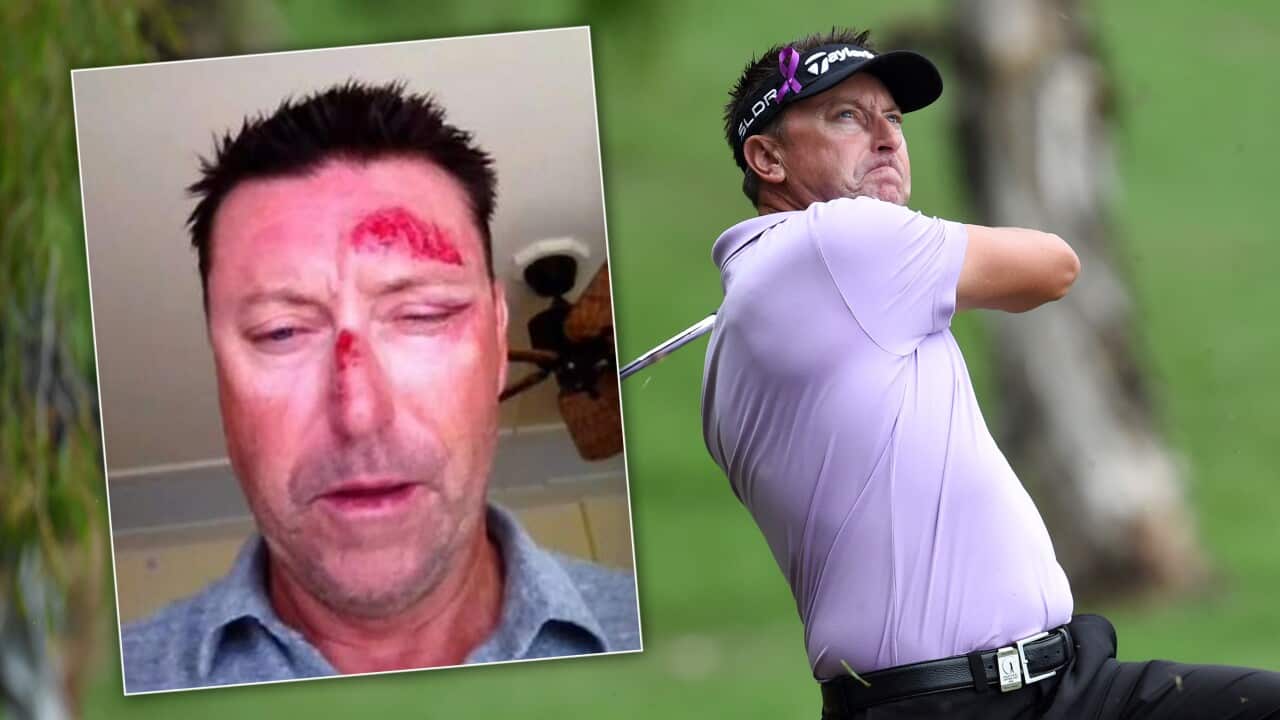 Australian golfer Robert Allenby hits out of the rough during round two of the Australian PGA Golf Championship at Royal Pines Resort on the Gold Coast, Friday, Dec. 12, 2014. (AAP Image/Dan Peled) NO ARCHIVING, EDITORIAL USE ONLY

Robert Allenby has stood by his story of being robbed, bashed and abducted in Hawaii, claiming he never lied to anyone.

Fronting the media ahead of playing the Phoenix Open, Allenby reiterated his initial claims of having no memory of between 11.06pm and 1.27am other than being told by a homeless woman he was bashed, robbed and abducted.

An emotional Allenby pleaded with media to respect the ongoing police investigation, amid reports questioning his version of events.

Advertisement
"There has definitely been a lot of confusion but the number one thing you should all remember is my story stays exactly the same as the way I told it," Allenby said.

The 43-year-old also confirmed he believes he was drugged and has taken a drug test to potentially find answers.

He also denies any recollection of being at a strip club and spending $US3400 ($A4,324) as a recent report suggests.

Allenby says homeless woman Charade Keane initially told him he was thrown from the boot of a car after being bashed and robbed, a claim she has since denied.

He had been enjoying dinner and drinks at Amuse Wine Bar in Waikiki with friends prior to the attack.

"There is no way in the world what I drank could do what was done to me, not a chance in the world," Allenby said.

"What has been blown out of proportion is I was a victim, yet all of a sudden you (the media) are putting all the blame on me.

"I take full responsibility if I did do something wrong but as I said from 11:06 to 1:27am I have no memory in my brain, I have nothing.

"I have been trying to go backwards and forwards and there is just nothing.

While the four-time PGA tour winner and 2005 Australian triple crown winner says he can rise above the negative talk he is disappointed in the affect it is having on his family.

The picture of his injuries was initially sent to his 15-year-old son on Facebook as he could not recall his phone number while suffering the after affects of a concussion and was trying to make contact.

Allenby has no idea how the picture was leaked to media.

"I am a strong willed character," he said.

"Physically I am starting to feel pretty good, mentally I am preparing myself for one of the toughest weeks of my life.

"It hasn't been an easy week last week and it wasn't an easy decision to come to this tournament but I thought I need to get my life back on track.

"I am a professional golfer and why should I let controversy keep me out of the game I love.

"A lot obviously has been said and there is a lot of trash talk out there.

"I am okay with that because I have a thick skin but my kids are still growing and learning and I have tried to guard them because this is something that should be guarded from them because the truth hasn't really come out.

"I'm not expecting a lot from this week but I am just expecting in myself to overcome this ordeal and just try to move on with my life."