Immigration is dominating the European elections - but will the far-right gain power?

Voters in the European Union will elect a new parliament this week in a test of how much support the populist and far-right parties have on the continent. 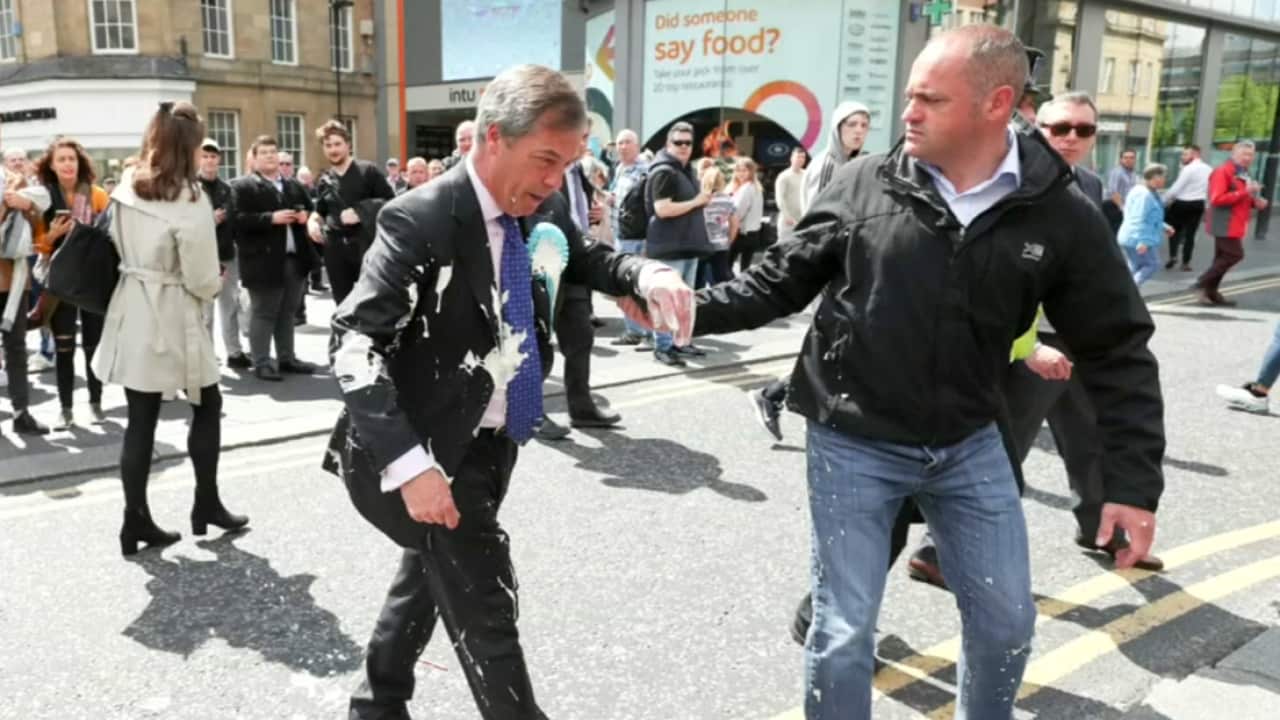 Brexit Party leader Nigel Farage was doused in a milkshake while he was campaigning in Newcastle, UK. Source: Reuters

The European Parliament elections, which begin on Thursday, have caused fierce debate in many countries between those that are anti-immigration and those that are not.

It has encouraged some people to take to the streets to demonstrate against far-right groups and their agendas, including in the UK, where milkshakes have been thrown at those standing, including
Tommy Robinson
and
Brexit party leader, Nigel Farage
.

Brexit Party leader Nigel Farage was doused in a milkshake while he was campaigning in Newcastle, UK. Source: Reuters

Advertisement
The EU poll is one election - but 28 contests will be held in 28 member countries, where about 374 million people are eligible to elect a parliament for a five-year term.

In 2014, voter turnout sank to a new low of 42 per cent, so the EU has lobbied hard this time around with emotive ads (see video at top of article) encouraging people to have their say.

Who is leading the far-right charge?

Some far-right groups have been presenting themselves as a united front against centrist and established parties. Chief among them is Italy’s far-right interior minister, Matteo Salvini.

As part of his EU parliament campaign, Mr Silvani recently urged a vote for his party, tweeting: “To defend the borders and the safety of our children”.

He invited other right-wing leaders, including Marine Le Pen of the French National Rally Party, to Milan recently to show a united front, and featured others heavily on his popular Twitter account, including Dutch politician Geert Wilders who believes that all Muslim immigration to his country should be stopped.

Immigration is a key issue

While the far-right parties have policy differences and a very strong focus on national identities, what unites them is their anti-immigration stance. They became more popular with some voters off the back of the Syrian crisis and the resulting influx of refugees.

Hungary's prime minister Victor Orban launched his party’s campaign for the European elections with a seven-point plan against immigration.

The main issues for voters in this year's elections. Source: SBS

They also claim to be anti-establishment.

At the heart of the agenda of the German far-right AFD Party is border protection, nationalism and anti-immigration rhetoric. They also blame the EU and "the establishment" for Germany's woes.

The party tweeted recently "We need a 'stronghold Europe'. We should only allow legal migration", urging a vote for its candidate.

Head of the department of political and social change at ANU Dr Paul Kenny told SBS News “it’s unclear at this stage what sort of policies or program these parties have".

"It’s more about building a coalition against the status quo," he said.

“The migration issue is on top of the agenda as most of these parties are concerned; the Syria conflict [and asylum issue] is a key driver of Euroscepticism in central Europe from Hungary and then all the way to Germany."

Poland's Law and Justice Party is campaigning ahead of the EU parliamentary elections. Source: Getty

How much impact will the far-right have?

The right-wing and populist parties across the EU, including in Italy, France, the Netherlands, Germany, Hungary and Poland historically had difficulties showing unity. That’s partly because they see their national differences and domestic policy agendas as so fundamental.

So it's unclear, the experts say, whether the parties will form a powerful coalition in the EU parliament and in turn be able to exert much influence.

“It’s not clear how effective that organisation among these populist parties will be or indeed whether they will form a group within the EU parliament, “ said Dr Ben Wellings, a senior lecturer of politics and international relations at Monash University.

But, he told SBS News, the tide is flowing with these populist, far-right parties.

“It’s a win for these parties who are trying to organise into one cohesive block; not very successfully we might add, but nevertheless they are trying to coordinate opinion across a radical anti-immigration, although not exactly an anti-EU agenda.”

The far right AFD Party in Germany campaigns with "Our land, our Germany" and "secure our borders". Source: DPA

This has prompted some of the most fierce pro-EU politicians, such as French president Emmanuel Macron, to move more to the left side of politics, arguing that “more Europe” is needed.

While the mainstream parties are tipped to get most votes, many expect that the right-wing and populist parties will score a big breakthrough.

Dr Wellings said they will then have an impact on the shape of parliament.

“I think it’s quite possible that these populist and far-right parties will grow their representation in the European Parliament,” he told SBS News.

“These are the first elections we had since the migration crisis in 2015 and it comes on the back of many years of mobilisation of politics by these populist parties, which had some significant wins, most notable in Italy.

“They won’t dominate parliament but they will be a significant minority within the parliament.”

Low voter turnout in EU parliamentary elections also tends to favour those on the political fringes, and this, Dr Kenny predicted, will have an impact on the more established parties.

“This seems to favour particularly motivated and more extremist voters; and those favouring the status quo are usually a bit more apathetic and don't turn out to vote, which harms the more conventional, mainstream parties in European elections. "