Hundreds of temporary visa holders stranded overseas have pleaded for the federal government to grant them an exemption to the coronavirus travel ban. 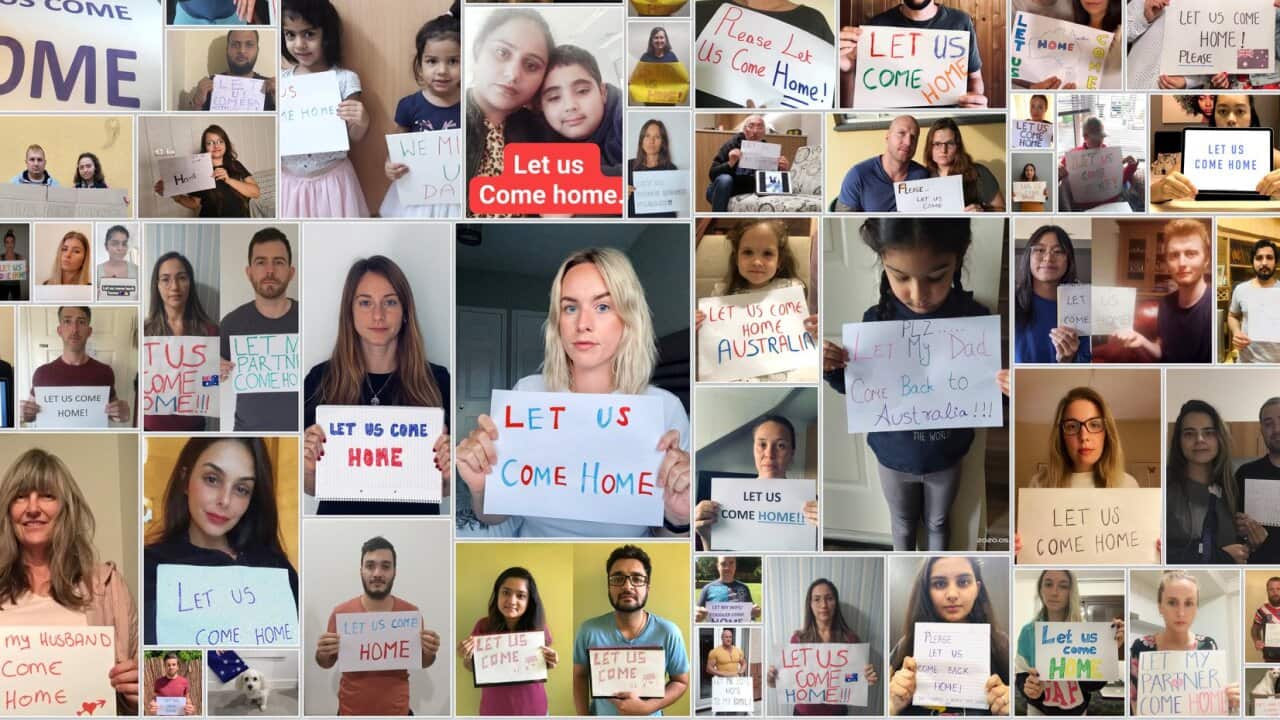 A petition with more than 12,000 signatures is calling for temporary visa holders stranded overseas to return to Australia. Source: Lucy Crisp

Acting Immigration Minister Alan Tudge says there are no plans to grant temporary visa holders a blanket exemption to Australia's coronavirus travel ban, despite pleas from those stranded overseas to be allowed back into the country.

Hundreds of skilled workers and international students have been unable to return to Australia without securing individual exemptions since the borders were closed to non-citizens on 20 March to limit the spread of coronavirus.

Visa holders caught out by the travel ban have told SBS News that despite calling Australia home for several years before the pandemic took hold, their applications on compassionate grounds have still been denied.

A petition signed by more than 12,000 people has also been tabled in federal parliament calling for visa holders to be allowed to return to their homes, families and jobs in Australia.

But Mr Tudge said the nation's borders would remain closed to everyone other than Australian citizens and permanent residents for the foreseeable future.

“Right now our focus is on keeping those borders strong,” he said on Thursday.

“It will be some time away until we see immigration back to anything like normal.”

Lucy Crisp and her partner Michael Flaherty were among those who had been unable to return to Australia after the pandemic took hold.

Ms Crisp, the 27-year-old UK citizen who started the petition, has been living in Melbourne for the past five years with her partner, who is on a 457 skilled shortage working visa.

The couple was on a two-week holiday in the United Kingdom visiting family when the border closure was announced and were unable to secure a return flight before it came into effect.

They have since been granted an exemption to enter to Australia, after almost two months without receiving such approval

“We just really want to do everything we can to get home,” she had told SBS News.

“We’ve made a huge commitment for our lives to be in Australia.”

Lucy says she and Michael are desperate to return to Melbourne. Source: Supplied

Ms Crisp said their numerous applications to return to the country on compassionate grounds were initially denied despite having careers, an apartment and puppy in Melbourne.

“Every time we receive that rejection email it is a hit to the realisation that we don’t know when this nightmare is going to end and when we are going to be able to go home,” she said.

Several other temporary visa holders who have been
separated from partners in Australia
, have also had their applications rejected.

He said thousands of temporary visa holders had been stranded overseas, and many of them are people who had worked and paid taxes in Australia and been separated from family.

“At a minimum people with families and jobs and homes in this country should be allowed back in,” he told the Senate.

He also warned a lack of criteria applied against applications for exemptions meant many people remained uncertain about their future.

“Many people simply do not understand why they have been banned."

Mr Tudge said the Border Force commissioner has the power to grant exemptions in “exceptional circumstances” but current travel restrictions were expected to remain in place for some time.

He defended the government’s focus on keeping borders secure, saying two thirds of Australia’s coronavirus cases had been sourced from overseas during the pandemic.

“If a vaccine is found it will change the equation but at this stage keeping our borders secure is a very strong priority,” he said.

Earlier this month, Border Force commissioner Michael Outram was pressed on the government's criteria for determining these exemptions at a Senate inquiry on COVID-19.

He said there was “no-factor weighted scoring model” for processing the applications and every one of these cases was “difficult” to assess.

Australian Border Force has approved 1,170 such applications to enter Australia and refused 220 as of 5 May.

The federal government’s roadmap towards easing restriction outlines that stage three measures could include travel exemptions for international students being considered by July.

But other temporary visa holders say they are desperate for more certainty over when they could be able to return to Australia.

Mr Tudge said he would encourage individuals to contact the immigration department if they believe they are worthy of an exemption to the travel ban.