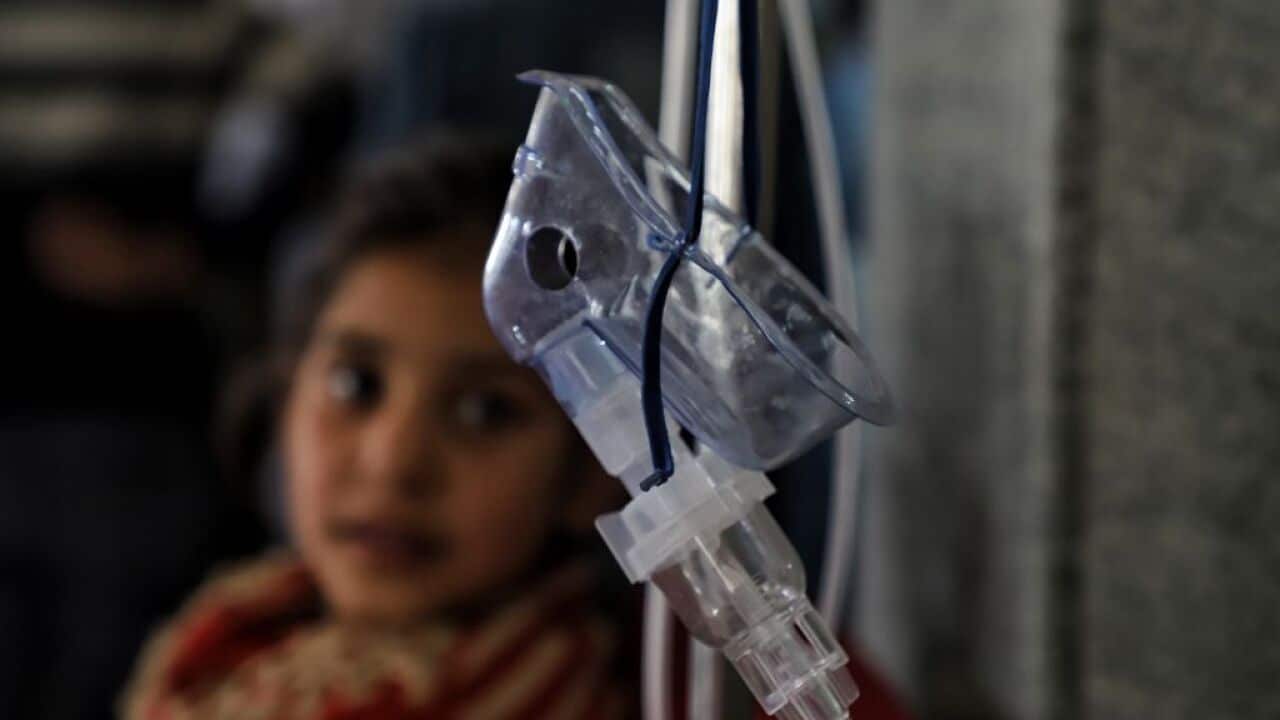 A girl who tested positive for COVID-19 looks towards the oxygen mask she received at a COVID-19 centre in Sopore, Jammu and Kashmir, India on 29 April 2021. Source: NurPhoto

India's total COVID-19 cases have passed 18 million after another world record daily infection and death tally and as the government rejected reports of problems with its vaccine campaign.

India reported 379,257 new COVID-19 cases and 3,645 new deaths on Thursday, according to health ministry data. It was the deadliest day so far for any country hit by the pandemic.

India's best hope to curb its second deadly wave of COVID-19 was to vaccinate its vast population, said experts, and on Wednesday it opened registrations for everyone above the age of 18 to be given jabs from Saturday.

Advertisement
But the country, which is one of the world's biggest producers of vaccines, does not have the stocks for the estimated 600 million people becoming eligible.

Many people who tried to sign up complained on social media that they could not get a slot or simply could not get online to register as the website repeatedly crashed.

"Statistics indicate that far from crashing or performing slowly, the system is performing without any glitches," the government said in a statement late on Wednesday.

The government said more than eight million people had registered for the vaccinations, but it was not immediately clear how many had got slots.

About nine per cent of India's population have received one dose since the vaccination campaign began in January with healthworkers and then the elderly.

Desperate family members are sending SOS messages on social media, hoping someone would help them find oxygen cylinders, empty hospital beds and critical drugs for their loved ones. Crematoriums have spilled over into parking lots, lighting up night skies in some cities.

With its healthcare system sinking fast, India is now looking at other nations to pull it out of the record surge that is barrelling through one state and then another.

In New Delhi, car parks have been converted to crematoriums and the body count has sparked a shortage of wood for funeral pyres.

Relatives of the sick are crowding outside hospitals and pharmacies in search of treatment and medicines.

Despite the raging pandemic, on Tuesday 25,000 people took part in the final bathing day at the Kumbh Mela religious festival in the northern Indian town of Haridwar, drawn to the banks of the Ganges by an "auspicious" full moon, festival official Harbeer Singh told AFP.

The gathering attracted millions of pilgrims, mostly without masks, fomenting criticism of Prime Minister Narendra Modi's Hindu-nationalist government for allowing it to go ahead.

The variant of the virus feared to be contributing to the catastrophic wave in India has now been found in more than a dozen countries, the World Health Organisation said.

But the WHO has stopped short of saying it is more transmissible, more deadly or able to dodge vaccine protections.

Many nations have rushed to help, sending desperately needed oxygen and aid.

"We will commence procurement of 100 oxygen concentrators with tanks and consumables," he told reporters from Canberra on Tuesday afternoon. "DFAT will manage the movement of this equipment, over the course of the next week."

As part of the global effort, Singapore said Wednesday it had sent two plane-loads of oxygen supplies, and Germany will deliver 120 ventilators and plans to set up oxygen production.

Russia said it was sending emergency help to the country - including oxygen support, ventilators and medicine - while Switzerland was sending $AU1.28 million in aid for hospitals.

India also looks set to receive some of the
millions of AstraZeneca vaccine doses
the United States has said it will export.

A view of mass cremation of COVID-19 victims at Gazipur crematorium on 28 April. Source: Hindustan Times

Ugur Sahin, the co-founder of BioNTech, said the vaccine his company jointly developed with Pfizer appears to protect against the Indian variant.

India is the fourth to cross 200,000 deaths behind the United States, Brazil and Mexico. And as in many nations, experts believe the coronavirus infections and fatalities in India are severe undercounts.

The first known COVID-19 death in India happened on 12 March 2020, in southern Karnataka state. It took five months to reach the first 50,000 dead.

The toll hit 100,000 deaths in the next two months in October 2020 and 150,000 three months later in January this year. Deaths slowed until mid-March, only to rise again sharply.

For the past week, more than 2,000 Indians have died every day.