An Indonesian soldier was killed while investigating reports that more than two dozen construction workers were shot dead by separatist rebels in the Papua province. 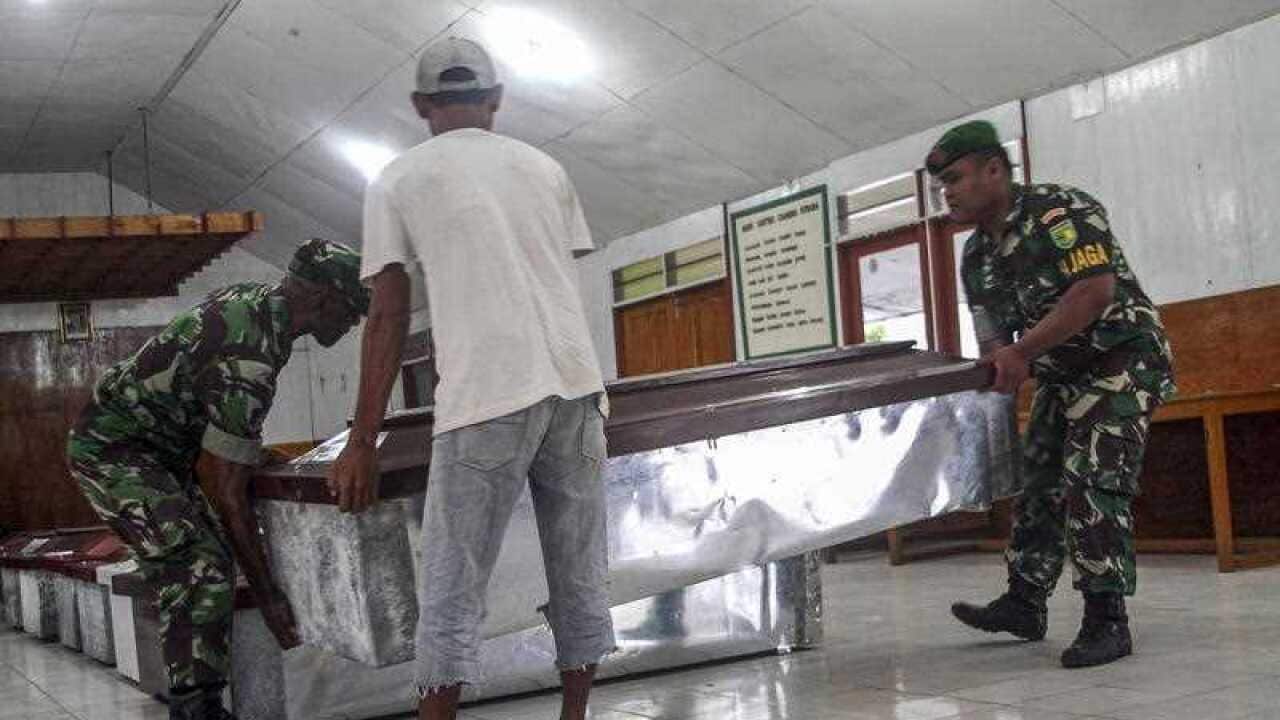 Indonesian soldiers are hunting for rebels suspected of killing as many as 24 construction workers in the restive Papua province, as an eyewitness account supplied by the military described a grisly mass execution.

The survivor's account detailed the killing of at least 19 people, which if confirmed would mark the deadliest bout of violence in years to hit a region wracked by a low-level independence insurgency.

A Facebook account purportedly run by the National Liberation Army of West Papua (TPNPB) said the armed group had killed 24 workers on the orders of regional commander Ekianus Kogoya.

Advertisement
Authorities have yet to confirm how many were killed in the weekend attack.

On Wednesday, some 150 military personnel were focusing their operation at Nduga, a remote mountainous region where a state-owned contractor has been building bridges and roads as part of efforts to boost infrastructure.

Indonesian military personnels and workers prepare coffins for construction workers, who were shot dead by suspected separatists, at a hall in Wamena, Papua. Source: EPA

Many Papuans view Indonesia as a colonial occupier and its building work as a way to exert more control over an impoverished region that shares a border with Papua New Guinea, an independent nation.

Indonesian president Joko Widodo said Wednesday he backed the hunt for those behind what he described as the "alleged assault".

"I have ordered the chiefs of the military and national police to chase and arrest all the perpetrators of these barbaric and inhumane acts," he told reporters in Jakarta.

Police and military teams sent to the area on Monday came under rebel gunfire with one soldier killed and another wounded in the firefight, authorities have said.

Four workers - including three suffering gunshot wounds - were among a dozen civilians who have been evacuated from the area so far.

On Wednesday, the military supplied an account from one survivor identified by his initials "JA" who claimed about 50 rebels entered the workers' camp on Saturday and led them away with their hands tied behind their backs.

The following day, the rebels shot dead a group of workers, while some tried to escape, the account said.

Indonesian military personnel listen to the relatives of construction workers, who were shot dead in an attack. Source: EPA

The attackers allegedly recaptured six workers and slit their throats, according to the uninjured witness, who said at least 19 employees had been killed in all.

Previous local media reports pegged the number of dead between 24 and 31.

AFP has confirmed with relatives that the eyewitness worked for the contractor in the area where the killings allegedly took place, but his account of a massacre could not be independently verified.

Indonesia routinely blames separatists for violence in Papua and foreign media need permission to report there so obtaining reliable information is difficult.

The military has long been accused of rights abuses against Papua's ethnic Melanesian population including extrajudicial killings of activists and peaceful protestors.

This weekend, about 500 activists - including an Australian - were arrested in a nationwide police crackdown that coincided with rallies on December 1, a date many Papuans consider their anniversary of independence from Dutch colonialists.

Papua declared itself an independent nation on that date in 1961, but neighbouring Indonesia took control of the resource-rich region by force two years later. It officially annexed Papua in 1969 with a UN-backed vote, widely seen as a sham.

Papua experienced several spasms of violence this summer including the killing of three local people, allegedly by rebels.

But much of the past violence has involved skirmishes between rebels and Indonesian security forces.

It is unclear how the rebels are funded, but some of their arms flow in illegally from across the border in Papua New Guinea while others are snatched from Indonesian military personnel, according to authorities.

In August, Pole Jakub Skrzypski was arrested in Papua over an alleged arms deal involving separatists and he could face life in prison if convicted. His trial date has not yet been set.