Is there a case for Scott Morrison to call the federal election now?

ANALYSIS: There are a number of risks the prime minister must weigh up when deciding whether to call an early federal election. 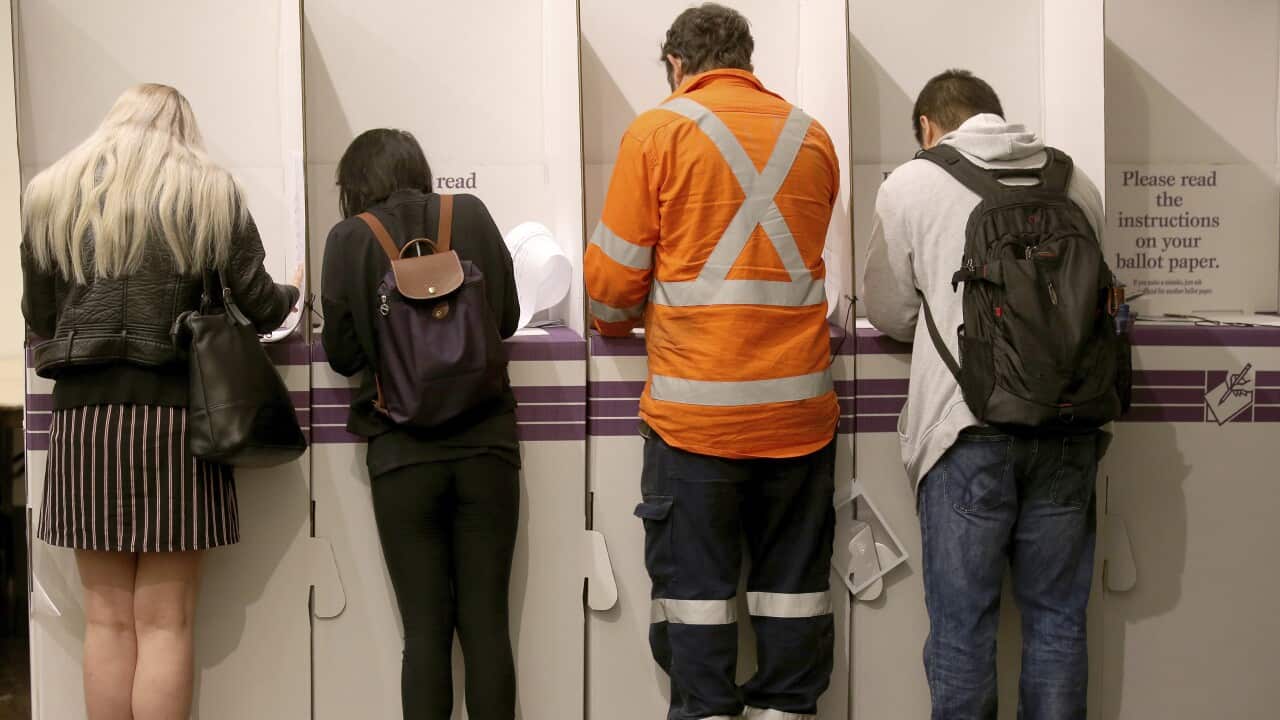 Voters fill in their ballots at Town Hall in Sydney, Australia during the 2019 federal election. Source: AAP, AP

In the wake of a tough week for Prime Minister Scott Morrison, a number of government MPs have dismissed any prospect he would go to the governor-general this week and call an early election.

Time and time again the prime minister has laughed off this speculation, laying out instead the path for a budget to be handed down in late March, with the federal election widely expected to be held in May.

Behind the scenes, the political calculation for the Liberal Party has consistently been to wait, and try to gain ground in the opinion polls before going to voters for a final verdict.

Advertisement
And the reality check overshadowing any decision is that a number of key Sydney seats still haven’t got a preselected Liberal candidate.

READ MORE
When is the 2022 Australian federal election?

The last week of parliament has been problematic because of the internal defiance on the floor of the House of Representatives and the general feeling of inertia around the government.

The prime minister appears to have been genuinely expecting to have secured the votes for the Religious Discrimination Bill, along with the backing of almost all his MPs.

Warren Entsch, a moderate backbencher from North Queensland, maintains he was in the room with a group of colleagues who “gave their word” they would vote with the government and then reneged.

The seasoned parliamentarian put that down to a mixture of naivety and lack of experience from first-term MPs.

He did not cross the floor, but five of his colleagues did.

And Liberal Senator Andrew Bragg threatened to do the same. All argue they moved to protect transgender children.

At the same time, a leak from cabinet revealed the prime minister had unsuccessfully tried to float a cross-trade on a federal anti-corruption commission to secure the support of wavering MPs.

But at the end of the week neither issue was dealt with. The potential for a stronger federal ICAC proposal was shot down and the Religious Discrimination Bill was shelved.

It’s against this backdrop that speculation has mounted about whether the prime minister wants to submit himself to another week of Question Time in the House of Representatives, and a week of scrutiny on his government’s decisions in Senate estimates.

The coalition also just poured more than $2 billion into South Australia ahead of a state election there next month.

Mr Morrison personally flew in for the announcement and held his press conference in the marginal seat of Boothby, even though the funds are going towards the road network in the neighbouring safe Labor seat of Adelaide.

Labor is competitive in the state and some South Australian federal politicians are nervous about that result too, wondering whether Mr Morrison could escape any federal blowback from that state result by calling the federal poll early.

The Super Saturday state by-elections in New South Wales were another test for the Liberal brand.

The Perrottet government lost the regional seat of Bega and experienced a significant swing against it in the Sydney seat of Willoughby, previously held by former premier Gladys Berejiklian.

After last week’s high octane debate over religious freedoms and sexual and gender identity, there are some members of the elected class openly musing about whether the nation would have been better off if the week of debate did not take place.

As transgender school students spoke to journalists about their own experiences at a vulnerable point in their lives and journey to forming their identity, the parliament’s understanding of how to deal with these complex issues was not evolving.

As parents were wiping away excited tears and sending off the next generation of kindergarteners to the classroom, the tenor of the education debate became highly charged.

One government MP wondered aloud: “I’m not sure of the question this bill is answering”.

The Federation of Ethnic Communities’ Councils of Australia (FECCA) also questioned the purpose of the Religious Discrimination Bill and the prime minister’s references to the need to pass it in the name of multicultural Australia.

FECCA also warned that more established religions could use the bill to discriminate against new and emerging ones.

When the bells ring for parliament on Monday one of the top orders of business is to progress the legislation to protect staff working in Parliament House, in the wake of the Jenkins Report and with the National Press Club address from Grace Tame and Brittany Higgins last Wednesday still fresh in the minds of politicians.

Both set out to outline the case for stronger action, more meaningful and effective policy and level of urgency.

The business of the House of Representatives will also include consideration of changes to the National Disability Insurance Scheme and passing laws around social media trolling.

But with the Upper House dealing with estimates and just a smattering of sitting days around the budget to go, the lawmaking of this parliament is largely completed.

In it, Mr Morrison speaks about the stresses of office in the pandemic.

“I’ve worn out the carpet, particularly down in Canberra, on my knees, when I spent most of the pandemic praying and praying," he said.

He says he “bleeds” like everyone else, considering the number of people in Australia who have died with COVID-19.

He later pulled out the Ukulele, an instrument synonymous with Hawaii, to strum a tune around the lunch table.

Those still building back after the Black Summer bushfires will be among the voters soon to cast a judgment.

Decisions are to be made amid the backdrop of rising dread about a military clash at the border between Russia and Ukraine.

Australia’s already evacuated the families of its diplomats from Kyiv from to Australia. Now diplomatic staff are being relocated to Lviv which is further from any potential flashpoints and 70 kilometres from the Polish border.

Whenever the election is called, the government is campaigning on national security and hip pocket issues.

Geopolitical uncertainty in Eastern Europe and a looming budget help shape that case for another term and incumbency.

But as economists watch inflationary pressures in the United States, and the Reserve Bank Governor Phillip Lowe warns they could precipitate an “abrupt change” in Australia, an interest rate rise and its political consequences cannot be discounted.

A potential risk to weigh up in deciding when to take the drive to Yarralumla.