Italian migrants in Australia share with SBS News their worries and hopes as the presidential election crystallises attention on the question of political stability. 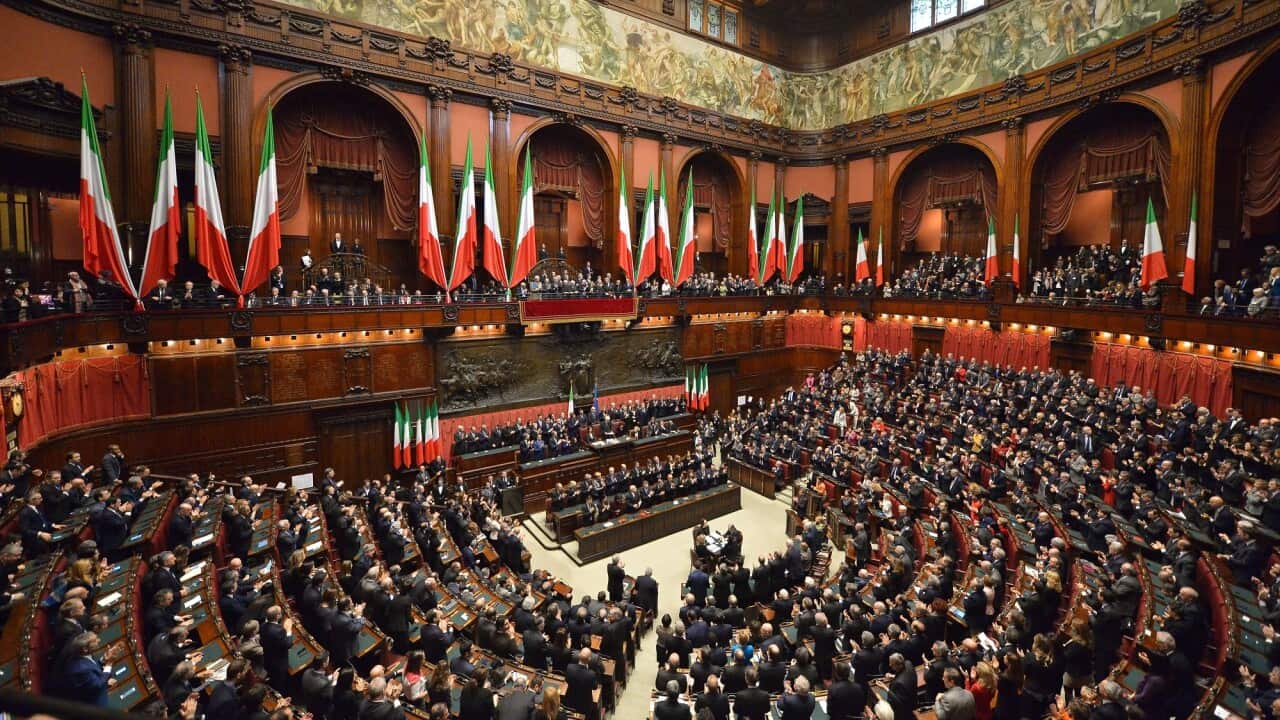 Italy's presidential election is set to kick off on Monday as the country's diaspora watch on from aboard in anticipation of who will be the next figurehead for their homeland.

More than 1,000 ministers, legislators are poised to select Italy's new head of state to replace current president Sergio Mattarella, whose seven-year term will soon come to an end on 3 February.

But the complexity of the election hasn't gone unnoticed by Italo-Australians, who believe Italy is in a fragile position during the process of electing a new president.

Advertisement
This is because the current prime minister, Mario Draghi, is viewed as the most favoured option to take over the presidency.

Should Mr Draghi win the presidency, his vacant position of prime minister will leave a gaping hole in parliament at a time when Italy is in need of stability.

The country is in the midst of reforms needed to ensure they receive a historic sum - A$302.38 billion (€191.5 billion) - of the European Union's recovery fund aimed to stabilise the country coming out of a post-pandemic economic crisis.

So, plucking Mr Draghi out of parliament at an instrumental time for the country's economic longevity is "problematic", according to Luigi Di Martino, president of the NSW Committee of Italians Abroad.

"It would solve one problem and then open up another huge problem, in terms of who is going to be the person to lead the executive," he told SBS News.

Luigi Di Martino is the the president of the Committee of Italians Abroad in NSW. Source: SBS

"Mario Draghi is an excellent prime minister and would serve Italy more in this current position rather than a president."

Italo-Australian and international relations student Jacqueline Michalopoulos, 20, said a possible early election could place the country "on the precipice of chaos".

Italo-Australian Jacqueline Michalopoulos is afraid Italy's government is "on the precipice of chaos". Source: SBS

She said Mr Draghi's united support from left and right-wing parties has brought the country an "unusual stability" that places Italy in an enviable position compared to other states in the EU.

"Under Draghi, Italian politics has paradoxically distinguished itself as being reassuringly dull," she told SBS News.

While the role of Italy's president is mainly ceremonial in nature, the position wields power in events of a government collapse. The president has the power to appoint prime ministers or resolve political crises.

Mr Di Martino said this position is significant - and whoever succeeds Mr Mattarella will carry the responsibility of Italy's international reputation on their shoulders.

"I'm expecting that the parliament and electors have the ability to find the right person for the position. This is going to contribute to the eternal reputation of Italy in the future."

The hope for a better Italy

Over one million people in Australia claim Italian heritage, according to the 2016 Census, reflecting the strong wave of migration that took place prior to 1971 when Italy's postwar economy took a severe dip.

One of those migrants was Angelo La Rosa, who migrated to Australia in 1956 when he was 21.

Now, he watches the Italian news on television intently, scrutinising the country's political affairs he left 66 years ago with great resignation after seeing a series of corruption scandals take over the government.

This includes the former prime minister and billionaire Silvio Berlusconi, who is notorious for his sex and tax fraud scandals,
who has withdrawn from the presidential race
two days out from the election.

Mr La Rosa told SBS News that he hopes the government elects more people like Mr Draghi and Mr Mattarella, who he described as fair.

"It's hard to replace Mario Draghi. There are parliamentarians who have been around for 40 years who have done nothing all of their lives," he said.

"These politicians are there to warm up the chair and Italy doesn't need so many politicians like this."

Mr Di Martino, who moved to Australia in 2011, accepted that many left Italy because of its economic problems. But if there is any hope the country will improve, they would like to return to Italy.

He said that is especially the case since COVID-19 proved to Italo-Australians that travelling "is not as immediate (or convenient) as it used to be".

"If the new presidency, with economic reforms, improves the economic situation, people will start thinking about going back."

Meanwhile, Ms Michalopoulos said many Italo-Australians feel a sense of "mournful resignation" around the country's future.

"There is undoubtedly a degree of resignation to political instability ... one that betrays the hope we all carry, that one day Italy’s political affairs will offer stability and prosperity."

"One day young Italians will not have to travel far from home for employment and economic stability."

At the age of 86, Mr La Rosa said he still holds hope for a better, more liveable Italy.