The Department of Homeland Security announced it had opened a criminal investigation into the case, as US President Joe Biden took aim at human smuggling gangs. 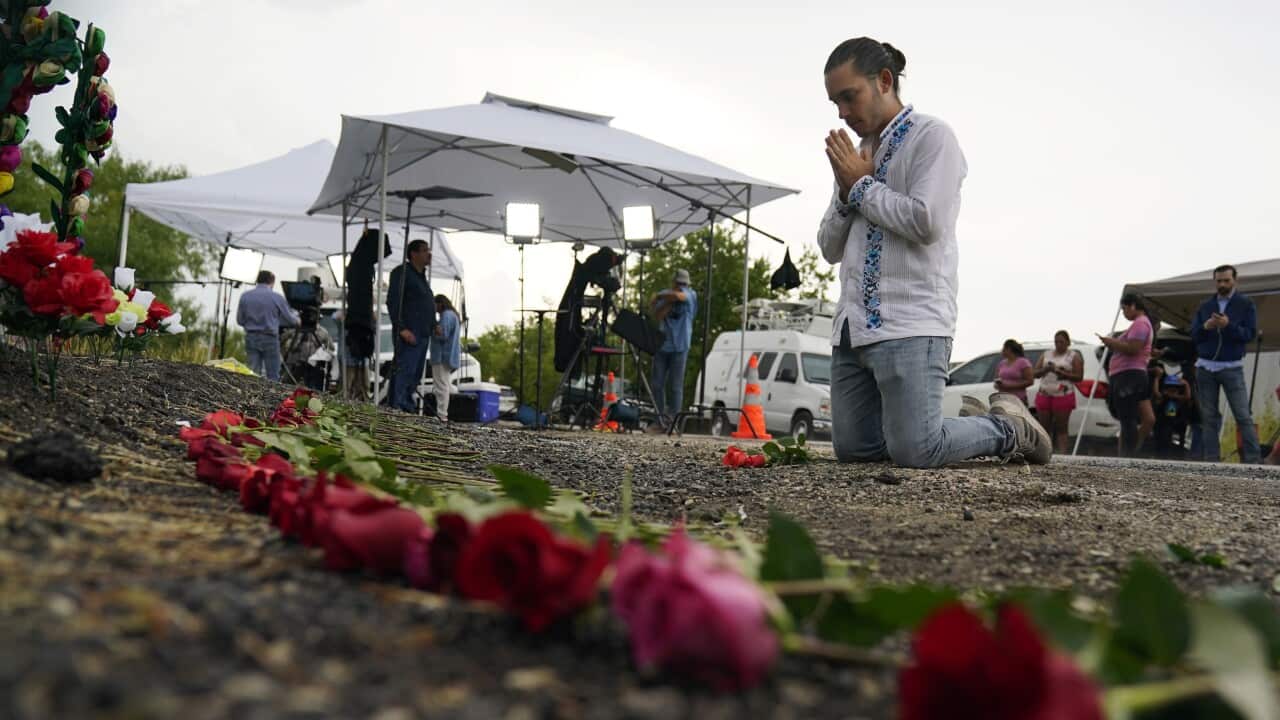 Carlow Eduardo Espina prays after placing roses on a make-shift memorial at the site where officials found dozens of people dead in a semitrailer on Tuesday, 28 June 2022, in San Antonio, Texas. Source: AAP / AP

At least 51 migrants have died after being trapped inside a sweltering tractor-trailer truck found abandoned in Texas, authorities say, as two Mexican nationals tied to the smuggling incident were charged in US federal court.

The dead migrants, 39 men and 12 women, were discovered on Monday on the outskirts of San Antonio, Texas, in one of the deadliest human-trafficking tragedies in recent history.

Investigators traced the truck's registration to a San Antonio address they placed under surveillance, and arrested the two men separately as they left the residence.

A third suspect, described as a US citizen who drove the truck, was arrested and expected to be charged, but he remained hospitalised as of Tuesday evening, according to a Mexican official.
Debra Ponce, left, and Angelita Olvera pray at the scene on Quintana Road in San Antonio on Tuesday, 28 June 2022, where 50 migrants died in a truck on Monday. Source: AAP / USA TODAY Network/Sipa USA
The Department of Homeland Security announced it had opened a criminal investigation, as Mr Biden took aim at human smuggling gangs.

"The tragic loss of life in San Antonio, Texas that took place yesterday is horrifying and heartbreaking," he said in a statement.

"This incident underscores the need to go after the multi-billion dollar criminal smuggling industry preying on migrants and leading to far too many innocent deaths," he said.

According to Mexican President Andres Manuel Lopez Obrador, of the dead whose identities are known, 22 were from Mexico, seven from Guatemala and two from Honduras.

"It's a tremendous misfortune," he told reporters.

It was the deadliest single incident involving migrants along the southern border in memory and drew more attention to the risks that hundreds of thousands of people face seeking to enter the United States from Mexico without permission.
READ MORE
Three in custody after 46 people found dead, 16 injured inside semitrailer in Texas
On Monday, the high temperature in San Antonio was 103 degrees Fahrenheit (39.4 degrees Celsius), and the temperature in the unvented trailer would have been much higher.

By Tuesday afternoon, authorities had removed the trailer from where it had been abandoned with its human cargo, on a narrow road sandwiched between train tracks and auto junkyards. Replacing it were makeshift crosses adorned with artificial flowers.

"I feel that if these people walk hundreds of miles to get over here, it wouldn't hurt us to walk maybe one mile to put the crosses and candles," said Angelita Olvera, who lives nearby.

"Hopefully, whoever had them in the trailer will pay the consequences," she said.

San Antonio Police Chief William McManus said authorities were first alerted to the trailer by an emergency call at about 5.50 pm local time (8.50 am AEST) on Monday.
READ MORE
Resettlement of more than 1,200 refugees under US deal set to be completed by end of year
"A worker who works in one of the buildings up here behind me heard a cry for help," he told reporters.

The worker "came out to investigate, found a trailer with the doors partially open, opened them up to take a look, and found a number of deceased individuals inside," Mr McManus said.

Three people have been taken into custody but officials gave no further details.

The tragedy came five years after 10 migrants were found dead in a trailer with broken air conditioning and clogged ventilation holes near San Antonio.

In recent weeks, Border Patrol officers have discovered other attempts to bring undocumented travellers into the country in large trucks.

On 14 June, 80 people from Mexico, Guatemala, Honduras and El Salvador were discovered inside a tractor-trailer when it was inspected by agents at a highway checkpoint north of Laredo, a border hub in south Texas.

Three weeks earlier, agents intercepted a trailer with 48 people inside near Sierra Blanca in western Texas. Jesus Thompson, 60, lives just across the train track from where the people in the trailer were found.

"People from Mexico and Guatemala come here to seek the American dream," he said.

"I would tell the people who are there and who are fleeing to think about it before coming here, because there is a tremendous risk, and especially now that the weather is very hot."
Share
4 min read
Published 29 June 2022 at 11:10am
Source: AFP, SBS