As he prepares to lead the US through the pandemic, Joe Biden has asked Anthony Fauci to stay on as chief medical adviser and says he will take his coronavirus vaccine in public. 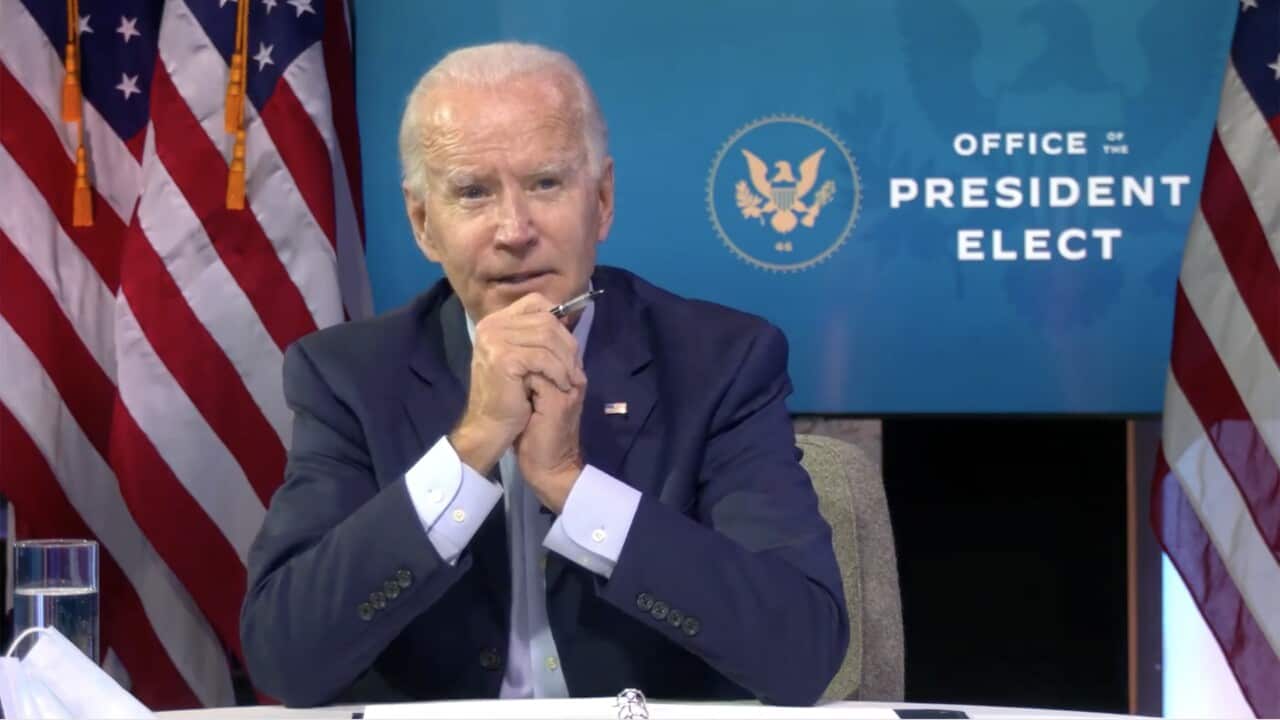 US President-elect Joe Biden conducts a virtual roundtable with workers and small business owners impacted by COVID-19 in Delaware on 2 December. Source: AAP

US President-elect Joe Biden said on Thursday he would publicly take a coronavirus vaccine to demonstrate its safety to the public and pledged to retain the nation's top adviser on the pandemic, Anthony Fauci, when he takes office next month.

"People have lost faith in the ability of the vaccine to work," Mr Biden told CNN in an interview that aired on Thursday.

Dr Fauci, director of the National Institute of Allergy and Infectious Diseases and a member of President Donald Trump's coronavirus task force, met with Mr Biden's advisers on the pandemic earlier in the day. In the interview, Mr Biden said he asked Dr Fauci to stay on as a chief medical adviser.

In the interview alongside Vice President-Elect Kamala Harris, Mr Biden called for Congress to pass the $908 billion bill proposed by moderates in the US Senate, but said that it should be viewed as a "start" to providing relief during the pandemic.

"People are really hurting," he said. "They're scared to death."

Mr Trump and the Republican National Committee said on Thursday they had raised $207.5 million since the 3 November election. Mr Trump has urged supporters to send money to finance his legal efforts to overturn his loss to Mr Biden. The efforts have so far proved fruitless.

Having not conceded, Mr Trump has not committed to attending Mr Biden's inauguration on 20 January. Mr Biden said Mr Trump's presence would be important "to demonstrate at the end of this chaos that he's created that there is peaceful transfer of power, with the competing parties, standing there, shaking hands, and moving on."

Mr Trump at times
has criticised Dr Fauci's insistence on aggressive measures
to combat the COVID-19 pandemic, which has now claimed 273,000 US lives.

US deaths from the coronavirus pandemic have surged past 2,000 for two days in a row as the most dangerous season of the year approaches. Nearly 200,000 new US cases were reported on Wednesday, with hospitalisations approaching 100,000 patients.

Pfizer Inc's vaccine has already been approved by regulatory authorities in Britain, while the US Food and Drug Administration plans to decide whether to do so on an emergency basis after an advisory panel meeting on 10 December. Vaccines could be distributed in the United States almost immediately afterward.


Dr Fauci was critical, however, of the approval process in the UK. "They kind of ran around the corner of the marathon and joined it in the last mile," he told CBS News. "They really rushed through that approval."
He later apologised
, however, for his critique, telling the BBC that he meant "no judgment" of the British process.

In the CNN interview, Mr Biden said that as president, he will order masks to be worn in federal buildings and transportation hubs. He said he will ask Americans to wear masks for the first 100 days of his administration.

Mr Biden's remarks on taking a vaccine after three former presidents - Bill Clinton, George W. Bush and Barack Obama -
said they would publicly get the coronavirus vaccine
as a way to demonstrate its safety.

READ MORE
Joe Biden urges all Americans to wear masks, says it's 'not a political statement'

Politico reported that Biden adviser Vivek Murthy would return to his role as surgeon general, a post he held under Mr Obama, but with a broader portfolio as the pandemic rages through the country.

Mr Zients, a wealthy businessman who has moved between the public sector and corporate America, will oversee the mammoth and unprecedented operation to distribute hundreds of millions of doses of the new vaccine in the United States, coordinating efforts across multiple federal agencies.

In recent weeks, Mr Zients has served as a pandemic liaison of sorts with governors and state officials, frequently joining calls to share data and discuss concerns, according to two sources familiar with the calls.

Mr Biden said that Brian Deese, who helped lead Mr Obama's efforts to bail out the automotive industry during the 2009 financial crisis, would head the National Economic Council.

Mr Trump's push to reverse the results of the election saw its latest setback on Thursday when
Wisconsin's Supreme Court declined to take up a case
filed against election officials in the battleground state.