The shooting death of Australian woman Justine Damond at the hands of US police has been ruled a homicide as her distraught partner demands answers. 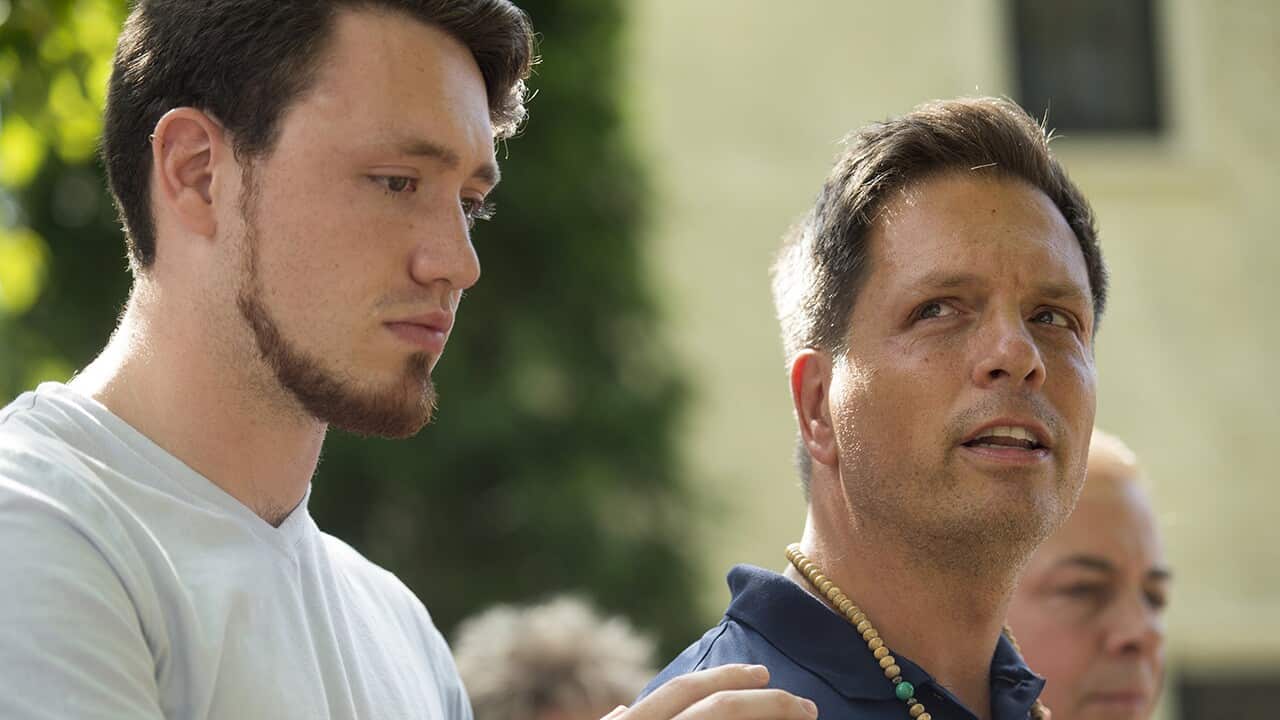 Don Damond (R), fiance of Justine Ruszczyk, makes a statement to the media as his son Zach Damond (L) comforts him as he speaks in Minneapolis, 17 July 2017. Source: EPA

The US medical examiner who performed the autopsy on Australian bride-to-be Justine Damond has ruled her death a homicide, after a neighbour labelled the fatal police shooting an "execution".

Her distraught partner Don Damond, 53, wants to know why a police officer felt so threatened by a pyjama clad Ms Damond he shot her dead behind their Minneapolis home.

Ms Damond was hit in the stomach when Minneapolis officer Mohamed Noor fired around across his partner from inside their police car about 11.30pm on Saturday.

"This individual died of a gunshot wound of the abdomen," the Hennepin County Medical Examiner's Office said on Monday. "Manner of death is homicide."

The 40-year-old from Sydney's Freshwater had called police to report screams and what she believed was a woman being sexually assaulted outside her home.

"Her family and I have been provided with almost no additional information from law enforcement regarding what happened after police arrived," Mr Damond said.

"Piecing together Justine's last moments before the homicide would be a small comfort as we grieve this tragedy."

The couple was due to marry next month.

"It is difficult to fathom how to go forward without her in my life," Mr Damond said.

Neighbour Joan Hargrave called the killing "an execution" and said there was no reason for a well-trained officer to see Ms Damond as a threat.

"This is a tragedy - that someone who's asking for help would call the police and get shot by the police," Hargrave said.

Ms Damond had reportedly approached the driver's side window of the police car when it arrived.

The Minnesota Department of Public Safety Bureau of Criminal Apprehension (BCA) is investigating.

The BCA have confirmed officer Noor and his partner's body cameras weren't on and their police car dashboard camera didn't capture the incident.

Once the investigation is complete, Hennepin County Attorney Mike Freeman will decide whether to lay charges.

"I've asked for the investigation to be expedited to provide transparency and to answer as many questions as quickly as we can," she said.

His lawyer Tom Plunkett released a statement saying Noor offered his condolences to the family "and keeps them in his daily thoughts and prayers."

The statement added: "He joined the police force to serve the community and to protect the people he serves. Officer Noor is a caring person with a family he loves, and he empathises with the loss others are experiencing."

Mr Damond said the loss of his partner was devastating.

"We have lost the dearest of people and we are desperate for information."

"Our hearts are broken."

Ms Damond was raised on Sydney's northern beaches and attended Manly high school. Her father John is the owner of a Dymocks bookstore in Warringah Mall and her brother Jason works for the local council.

Neighbour and family friend Julia Reed said her Australin family was trying to come to terms with the tragedy.

"We'll remember her energy, her intelligence and the joy she brought to her life," she told the Manly Daily.

She had moved to the US after meeting and falling in love with Mr Damond.

Also known as Justine Ruszczyk, a veterinarian who became a spiritual healer and meditation teacher, Ms Damond took her fiance's surname before next month's planned wedding.

By Monday, flowers had been left at the scene where she died along with a handwritten sign asking "Why did you shoot and kill our neighbor?"