Vice President Kamala Harris says the fatal shootings of eight women, including six Asian women, in spas in Atlanta spoke "to a larger issue which is violence in our country". 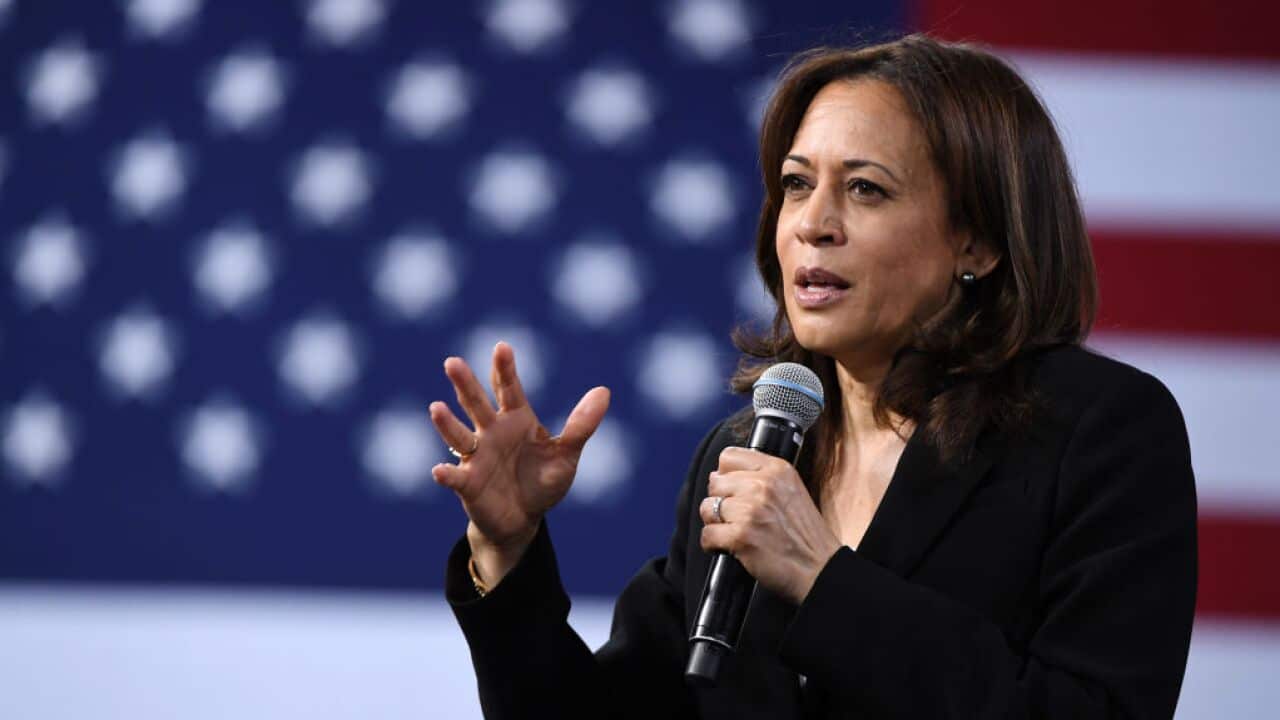 Vice President Kamala Harris says the deadly shootings in spas around Atlanta are a tragic reminder that it was critical to always speak out about violence, and expressed solidarity with Asian Americans, who have experienced a rise in hate crimes.

Law enforcement officials on Wednesday charged a 21-year-old man with eight counts of murder and one count of aggravated assault following the fatal shooting of eight people, including six women of Asian descent.

Authorities say the man claimed he had issues with sexual addiction and that the shootings may have not been motivated by racial hatred.

Advertisement
Nevertheless, the tragedy has exacerbated concerns over a surge in violence targeting the Asian-American community during the pandemic.


Ms Harris said she understands how frightening the tragedy has been for the Asian-American community.

"We are not yet clear about the motive. But I do want to say to our Asian-American community that we stand with you and understand how this has frightened and shocked and outraged all people, knowing the increasing level of hate crime against our Asian-American brothers and sisters," Ms Harris told reporters.

Authorities stressed they had not determined the motive of the shooter, identified as Robert Aaron Long, a white man who is believed to have acted alone.

"The suspect did take responsibility for the shootings," Captain Jay Baker of the Cherokee County Sheriff's Office told a news conference.

"This is still early, but he does claim it was not racially motivated," Mr Baker added.

"He apparently has an issue, what he considers a sex addiction, and sees these locations as... a temptation for him that he wanted to eliminate."

When asked by reporters if Mr Long understood the gravity of his actions, Mr Barker said that investigators found that to be the case, adding that it had been "a really bad day for him".

"He was pretty much fed up and at the end of his rope and yesterday was a really bad day for him and this is what he did."

"I know that Asian Americans are very concerned," Mr Biden said, though he stressed any motive had "yet to be determined".

When pressed on why Mr Biden didn’t want to comment on the motive, The White House press secretary Jen Psaki said there was “no question” former President Donald Trump’s “damaging rhetoric” around the coronavirus had escalated attacks on Asian Americans.

“I think there’s no question that some of the damaging rhetoric that we saw during the prior administration - blaming, calling COVID the ‘Wuhan virus’ or other things led to perceptions of the Asian American community that are inaccurate.

Ms Psaki said this rhetoric had “elevated threats against Asian Americans, and we’re seeing that around the country”.

Democratic House Speaker Nancy Pelosi described the shootings as "a vicious and vile act that compound the fear and pain that Asian-Americans face each day".

Violence in the US

Tuesday's rampage began with an attack at Young's Asian Massage in Acworth, an Atlanta suburb, where four of the victims were killed and a man was wounded.

Police said four women were subsequently killed in attacks on two neighbouring spas in the northeast of Atlanta.

In the initial attack, the sheriff's department has charged Mr Long with four counts of murder and one count of aggravated assault, US media reported.

Officials did not immediately announce charges related to the attacks at the two spas.

Cherokee County Sheriff Frank Reynolds said Acworth, a normally quiet commuter community, had experienced few murders and Tuesday's violence was "a shock to all of us".

Adriana Mejia, niece of the wounded victim in the Acworth attack, said the family was "devastated" after her uncle was shot and that they were praying for his recovery.

South Korea's Yonhap News Agency reported the country's foreign ministry had confirmed that four of the victims were of Korean descent.

Flowers are seen outside a massage parloir where four people were shot and killed on 17 March 2021 in Acworth, Georgia. Source: Getty Images North America

The shootings come as reports of attacks against Asian-Americans, primarily elders, have spiked in recent months -- fuelled during the COVID-19 pandemic, activists believe, by talk of the "Chinese virus" by former president Donald Trump and others.

"It shocks the conscience," Sam Park, a local representative of the Asian-American community, told AFP in Atlanta.

"We have lost so many lives this past year. We have seen racism and discrimination and a surge of violence against Asian-Americans who are scapegoated because of the pandemic."

Former president Barack Obama said on Twitter that while the shooter's motive was not yet clear, "the identity of the victims underscores an alarming rise in anti-Asian violence that must end".

News of the shootings came just hours after the release of a report by the advocacy group Stop AAPI Hate suggested a marked increase in hate crimes against Asian-Americans - with women disproportionately affected.

In a tally of incidents reported to the group between March 2020 and February this year, almost 70 per cent of Asian-American survey respondents said they had faced verbal harassment and just over one in 10 said they had experienced physical assault.

READ MORE
'The time to act is now': Joe Biden pushes for Congress to reform US gun laws

The state of Georgia, which has Atlanta as its capital, is home to nearly 500,000 people of Asian origin, or just over four per cent of its population, according to the Asian American Advocacy Fund.

"My heart is broken tonight after the tragic violence in Atlanta that took eight lives," he said.

"Praying for the families of the victims and for peace for the community."

"As details continue to emerge, this attack sadly follows the unacceptable pattern of violence against Asian-Americans that has skyrocketed throughout this pandemic," said Congresswoman Nikema Williams, who is also the state party's chairwoman.

In an address to the nation last Thursday Mr Biden condemned what he called "vicious hate crimes against Asian-Americans who have been attacked, harassed, blamed and scapegoated."