The US rapper, who plans to tour Australia in March, has previously described getting vaccinated as "the mark of the beast". 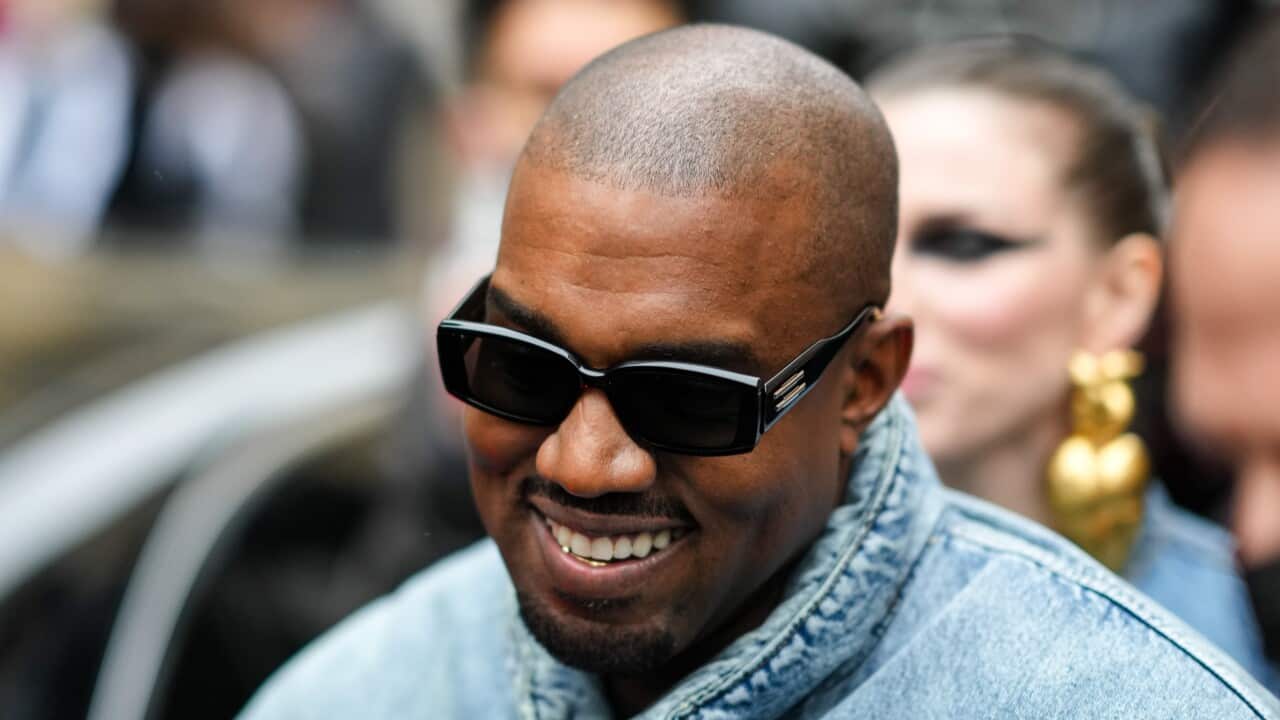 Prime Minister Scott Morrison has delivered a blunt warning to US rapper Kanye West: follow Australia's vaccination requirements to get two vaccine doses or don't come to the country.

When asked about West's plans to tour Australia in March, Prime Minister Scott Morrison said "the rules are you've got to be fully vaccinated."

The definition of "fully vaccinated" means two COVID-19 doses, although there is discussion on updating the criteria to mean three jabs.

Advertisement
"They're the rules, they apply to everybody... It doesn't matter who you are," Mr Morrison told reporters on Saturday.

Kanye West's vaccination status is unknown but in a 2021 interview on social media, he claimed he had received one dose of a COVID-19 vaccine.

In a 2020 interview with Forbes magazine, West - who has since changed his name to Ye - described getting vaccinated as "the mark of the beast", saying he had reservations about getting the jab.

The rapper, who ran in the 2020 US presidential election, also appeared to cite a baseless conspiracy theory that Microsoft founder Bill Gates is attempting to implant microchips into billions of people through a COVID-19 vaccine.

"It's so many of our children that are being vaccinated and paralysed," West falsely claimed.

"So when they say the way we're going to fix COVID-19 is with a vaccine, I'm extremely cautious. That's the mark of the beast," he told Forbes during a four-hour interview.

"They want to put chips inside of us, they want to do all kinds of things, to make it where we can't cross the gates of heaven."

No proof of being inoculated with a COVID-19 vaccination was required to attend West's Donda listening party in Chicago last August.

However, COVID-19 jabs were offered on-site to those who attended.

"Soldier Field and the Chicago Department of Public Health are pleased to be working together to offer 1,500-plus vaccinations for those not yet vaccinated (Pfizer or Johnson & Johnson) and assist with setting up their second dose at a later date," a representative for the venue told Rolling Stone.

Speaking in Victoria, Minister for Trade Dan Tehan said Minister for Immigration, Alex Hawke, will be the one to decide whether West will receive a visa.

“I can assure everyone, all Australians, that it will be looked at in a diligent manner and like all of these applications, the applicant would have to adhere to Australian rules and application protocols for that to be approved,” he told reporters on Saturday.

Djokovic was deported from Australia a fortnight ago, after the Federal Court upheld a decision by the Immigration Minister to cancel the athlete's visa for a second time.

The reasoning given by Hawke was that Djokovic was a "high profile" unvaccinated individual whose presence in Australia could foster anti-vaccine sentiment and civil unrest.

Novak Djokovic is missing from the Australian Open Source: AAP

"Strong borders are fundamental to the Australian way of life as is the rule of law," Mr Morrison said in a statement in response to the court decision on 16 January.

"I thank the court for their prompt attention to these issues and the patience of all involved as we have worked to resolve this issue. It's now time to get on with the Australian Open and get back to enjoying tennis over the summer."

But Labor immigration spokeswoman Kristina Keneally said at the time that Djokovic should not have been granted a visa to travel to Australia in the first place.

"This mess is not a failure of our laws. It is a failure of the Morrison government's competence and leadership,"
she said
.

"Australians have made all the hard sacrifices during lockdowns, only for Mr Morrison and his Government to serve up an embarrassing and farcical series of unforced errors after they foolishly granted Mr Djokovic a visa 60 days ago."

Australia, one of the nations most heavily vaccinated against COVID-19, has been attempting to contain a surge in Omicron cases with about 2 million recorded in the past month.

Prior to that, only 400,000 cases had been recorded in the first two years of the pandemic.

Health officials said there 97 COVID-19-related deaths on Saturday, one less than the pandemic high of 98 fatalities reported on Friday.

The double-dose vaccination coverage nationally is at 92.3 per cent for those aged 12 and over.