Supporters are calling US President Donald Trump's speech "electric" and "fantastic" after he kicked off his 2020 re-election campaign in Orlando, Florida on Tuesday night. 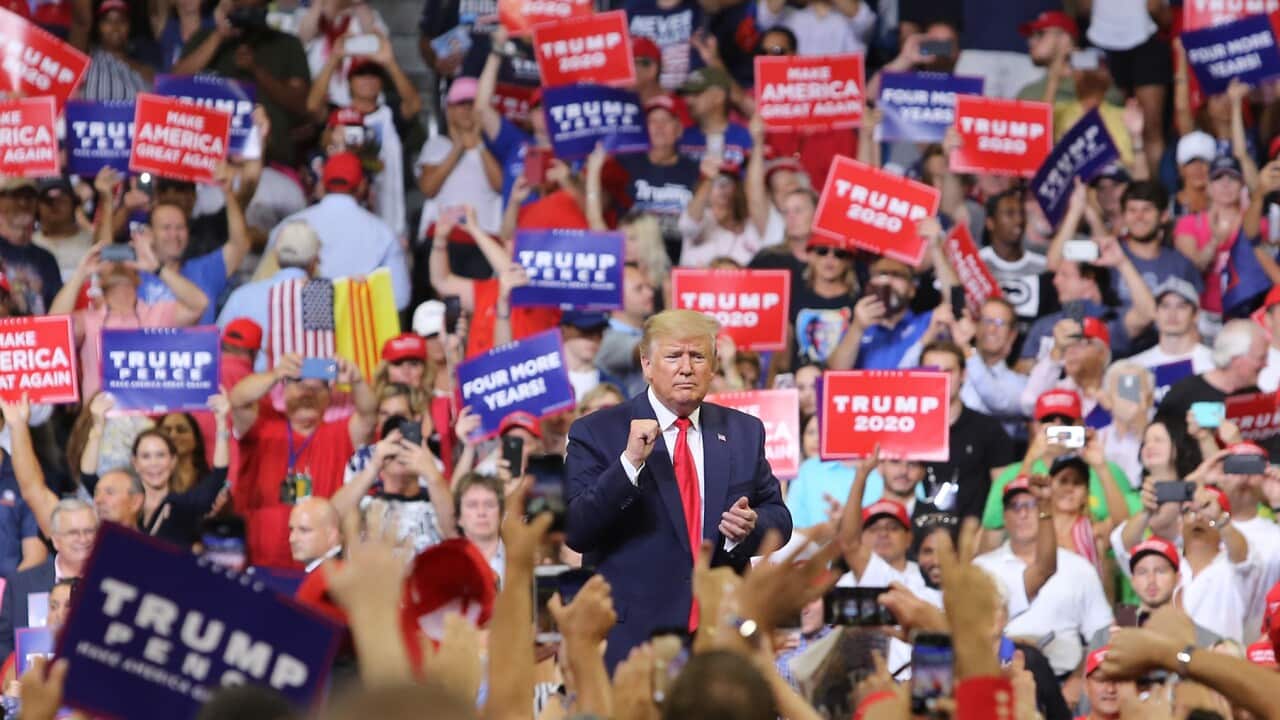 President Donald Trump launched his 2020 reelection campaign on Tuesday much the same way he rode to power in 2016 - with a raucous, nationalist rally stirring fear of illegal immigration and vowing to fight for blue collar workers.

Lashing out at his Democratic opponents as radical leftists fueled by "hatred" and out to "rip your country apart," Trump promised an "earthquake at the ballot box" next year.

"We did it once and we're going to do it again," he promised some 20,000 ecstatic supporters in Orlando, Florida.

"And that is why tonight I stand before you to officially launch my campaign for a second term as president of the United States."

There were no substantial new ideas or plans for the future in Trump's nearly 80-minute speech in the Orlando arena, where the crowd formed a sea of Trump campaign red baseball caps, chanting "USA" and "Four More Years."

Instead, the unconventional Republican made his reelection pitch by touting economic gains, renewing his longstanding vow to build a wall along the Mexican border.

In a speech filled with his customary boasts and rhetorical exaggerations, Trump did say - though giving no detail - that he would oversee cures for cancer and AIDS and pave the way to send US astronauts to Mars.

But the meat of his address aimed at the grievances and fears of the same white working and middle-class voters who underpinned his surprise victory as an utterly inexperienced politician against the seasoned Hillary Clinton in 2016.

Then Trump turned on the Democrats, whom he said have "become more radical, more dangerous, and more unhinged than at any point in the modern history of our country."

Even if dismal early poll numbers show he faces a difficult race, Trump goes into his fight buoyed by this fiercely loyal right-wing base.

READ MORE
US, China to restart talks ahead of G20

Trump - himself accused by opponents of a slew of serious crimes - told the crowd that together they had formed "a great political movement" that had "stared down a broken and corrupt political establishment."

"We are going to keep America great again," Trump told the packed arena in Orlando, Florida. "Oh, we will keep it so great."

Supporters lined Orlando's downtown sidewalks all day, waiting in tents and chairs overnight to be the first in the door.

"This is a historic event, we would not miss this for anything," one fan, David Meloney, told AFP.

Florida will be one of the key swing states in 2020 if Trump is to defeat the nominee chosen from a field of 23 Democratic hopefuls.

Trump's strongest card is the current health of the US economy, which he described as "the envy of the world."

But Trump said that the "American dream" itself is in peril from illegal immigrants, insisting that his stuttering Mexico wall project would still go ahead.

"Illegal mass migration brings in millions of low wage workers to compete for jobs, wages, and opportunities against the most vulnerable Americans, cutting off their path to the American dream," he said.

Oddly, he did not mention his announcement earlier in the day that he was ordering the deportation of "millions of illegal aliens."

Supporters of President Trump line up outside the Amway Center in Orlando, Florida. Source: SIPA USA

The startling threat was announced in a tweet in the morning but quickly was followed by media reports that government officials had no idea what the president was planning.

Hours before the rally, the president had insisted that officials were in fact on board with the project.

"They're going to start next week," he told journalists at the White House.

After more than two drama-filled years at the White House, the fast-talking real estate salesman is betting that Republicans and enough centrist blue collar workers will turn out again in 2020.

But there's no question that a lengthy probe into Trump's murky dealings with Russia and his divisive, bruising style has left him wounded.

A wide range of polls shows Trump lagging far behind Democratic frontrunner Joe Biden, who is campaigning on a promise to return the country to what he portrays as the calmer, gentler days of Barack Obama, under whom he served as vice president.

"Listening to Trump made me feel very much like he is a man living in a parallel universe... and is a man who must be defeated," Sanders said.

A Quinnipiac University poll released Tuesday showed Biden leading Trump 50-41 per cent in Florida, while Senator Bernie Sanders is up 48-42 per cent over the president in the state.

Polls so far in advance have limited value and in 2016 they famously failed to predict Trump's defeat of Democrat Hillary Clinton. If anything, the surveys point to another bitterly fought, tight race.

But in a sign of frayed nerves, Trump has lashed out at what he calls "fake" polling, while multiple US media reports say that his campaign has fired several of its own pollsters.