More than 10 anti-Semitic incidents occurred around the world every day on average last year, according to the World Zionist Organization and the Jewish Agency. 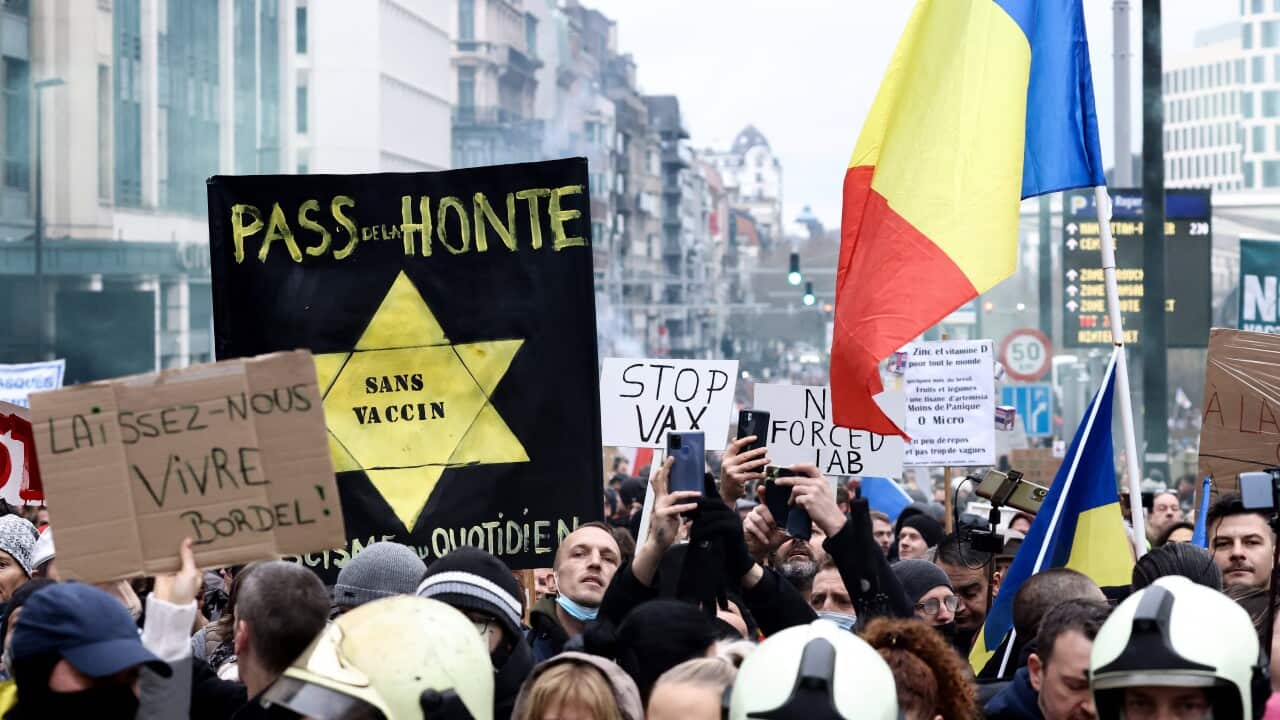 The Nazis forced Jews to wear Yellow Star badges. A report has criticised the use of Holocaust analogies in protests against COVID-19 restrictions. Source: Getty

More than 10 anti-Semitic incidents occurred around the world every day on average last year, according to a new report.

Nearly half of the incidents took place in Europe, with the United States following at 30 per cent, said the report from the World Zionist Organization and the Jewish Agency for Israel.

Canada and Australia saw a "surprising" increase in incidents compared to previous years, according to the report, which did not offer further information on the rise.

Advertisement
But while the numbers showed that 2021 was "the most anti-Semitic year in the last decade", at the same time "no Jew in the world has been murdered on anti-Semitic grounds" over that period, the report said.

The semi-governmental Jewish Agency is the executive branch of the World Zionist Organization.

Published ahead of the international day of remembrance for the victims of the Holocaust, on 27 January, the report notes that most of the anti-Semitic incidents were "vandalism and destruction, graffiti, and desecration of monuments, as well as propaganda".

It added: "Incidents of physical and verbal violence accounted for less than a third of all anti-Semitic incidents."

Such episodes and attacks peaked during May, when Jewish and Muslim festivals led to clashes in Israel and the Palestinian territories, and a war with Hamas, the Islamist movement that rules Gaza, the report said.

In addition, many European countries lifted their pandemic lockdowns that month, which allowed anti-Semitism that spread online "to move around the public space again", the report said.

"Many demonstrations against the COVID vaccines and restrictions included Holocaust motifs, such as the yellow star, as well as anti-Semitic conspiracy theories accusing Jews as spreaders of the pandemic to control the world," the report said, expressing concern over the "trivialisation of the Holocaust".

The Holocaust saw the genocide of six million European Jews between 1939 and 1945 by the Nazis and their supporters.

A separate report by Combat Antisemitism Movement (CAM), an umbrella of more than 100 groups, said the use of Holocaust analogies in relation to the coronavirus pandemic allowed for the trivialisation of Nazi crimes.

A social media scan in six languages for the years 2020-2021 found more than 60 million online engagements tying together the Holocaust and COVID-19, the vast majority of them in English, with Hebrew and Spanish following.

"The memory of the Holocaust is a cornerstone in the fight against anti-Semitism, and I call on top decision makers, internet giants, and all people to take this alarming trend seriously," he said in a statement.