Novak Djokovic left the country on Sunday evening, after a back-and-forth legal battle about his visa and eligibility to come to Australia to play in the Grand Slam tennis event. 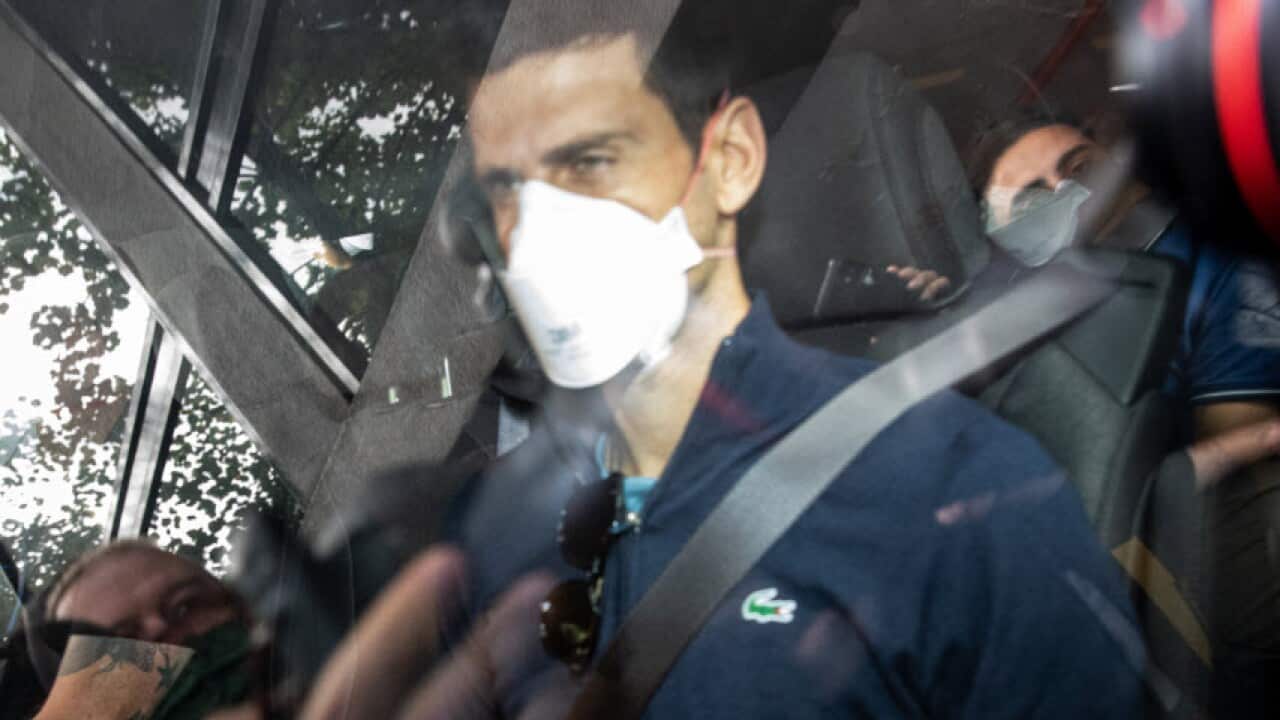 Novak Djokovic's deportation sets a "dangerous precedent", according to legal experts who say other high-profile individuals could be refused entry into Australia if they hold views contrary to the government.

The 34-year-old had been set to launch the defence of his Australian Open title in the competition's opening round on Monday, but
instead left the country on Sunday evening
.

The build-up to the tournament was overshadowed by a saga surrounding his visa and vaccination status.

Djokovic was detained on arrival in Australia late on 5 January and had his visa cancelled, with the Serb taken to the detention facility at the Park Hotel.

On 10 January, a judge quashed the visa cancellation, but Immigration Minister Alex Hawke revoked the visa on public interest grounds on Friday. A court ruled over the weekend to uphold Mr Hawke's decision.

Australian Lawyers Alliance spokesman Greg Barns SC described the minister's powers as "God-like" and said the government would have been justified if Djokovic was coming as part of an anti-vaccination campaign.

Mr Barns said the Djokovic case sets a "dangerous precedent", which could see any individual banned from entering Australia if their views could cause others to engage in unrest.

"You might have a film star or a singer who wants to come to Australia, and has expressed strong views about the US-Australian alliance in the past and encouraged people to protest against [it]," Mr Barns said.

"On the basis of this sort of reasoning, a minister could say: 'Well, I'm not going to allow you into the country because you've got a very high profile and you may express views and become a lightning rod for people opposed to the US-Australian alliance'."

Serbian president says Djokovic can return with 'his head high'

He added: "They think they humiliated Djokovic with this, the best player in the world. By the 10-day harassment, they humiliated themselves and Djokovic can return to his country with his head high up and look everyone in the eye."


The Serbian Tennis Association also added to the criticism, writing: "The farce is over. The [Association] expresses its great disappointment with this decision of the Australian court. Politics has won over sport this time."

It also raised questions about what it called "the interference of politics in sports", questioning what message Australia - which is due to host the 2032 Summer Olympics and Paralympics in Brisbane - is sending to the world.

"We believe and hope that even after this injustice done not only to one historically successful athlete but also to an exceptional person, Novak, as usual, will be stronger and better," it said.

Djokovic issued a statement on Sunday night addressing the outcome of the hearing.

He said while he was "extremely disappointed" with the ruling, he will "cooperate with the relevant authorities in relation to his departure" from Australia.

What has the reaction been among Serbians?

Serbian media reported Djokovic's father, Srdjan Djokovic, likened the ruling as an "attempt to assassinate the best athlete in the world".

Newspaper Blic reported that he posted to his Instagram story saying: "The attempt to assassinate the best athlete in the world has ended, 50 bullets in Novak's chest."

The paper reported the post was then removed with a clarification from Srdjan Djokovic that he was quoting the words of fans.

Politicians in Serbia have also widely condemned the removal of Djokovic.

Former president of the United Nations General Assembly Vuk Jeremić compared the tennis player to Muhammad Ali's vilification for refusing to be inducted into the US armed forces.

He wrote on Twitter: "The legacy of @DjokerNole will go beyond achieving historical tennis records - he already is the greatest player of all times.

"One should remember that Muhammad Ali was vilified too, after refusing to go to Vietnam. The rest was history."

The country's Prime Minister Ana Brnabic added: "I think that the court decision is scandalous, I am disappointed, I think it demonstrated how the rule of law is functioning or better to say not functioning in some other countries."

A Serbian diplomat and politician compared the treatment of Djokovic to Muhammad Ali's vilification. Source: Bettmann

What have fellow players said?

Briton Andy Murray, who became world number one at the expense of Djokovic in 2016, told the BBC the situation was not a good one for tennis.

"The situation has not been good all-round for anyone. It feels everything here happened extremely last minute and that's why it became such a mess.

Australian Nick Kyrgios posted a facepalm emoji on Twitter, while Vasek Pospisil wrote Djokovic would have skipped the tournament in Melbourne if he hadn't been given an exemption.

The Canadian, who co-founded the Professional Tennis Players Association with Djokovic, wrote: "There was a political agenda at play here with the elections coming up which couldn’t be more obvious.

"This is not his fault. He did not force his way into the country and did not 'make his own rules'; he was ready to stay home."

"I know too little to judge the situation. What I know is that Novak is always the first one to stand for the players," she wrote on Twitter.

"But none of us stood for him. Be strong @DjokerNole."

Meanwhile, former refugee and award-winning writer Behrouz Boochani called out the "special treatment" Djokovic has received in court, in contrast to the experience of refugees.

"The way Djokovic got special treatment in court, the way he has shaken the country - while the experiences of refugees did not - shows that Aus gov and right wing media have succeeded in dehumanising refugees," he wrote on Twitter.

"Only through dehumanisation are these distinctions possible."

Fellow Serbian players Djere and Dusan Lajovic added their voices of support for Djokovic after their respective first-round matches at Melbourne Park on Monday.

"Not just Serbians, I think the whole world saw it and they probably will have a new or different opinion about Australia," Djere said, after losing to 14th seed Denis Shapovalov in a four-set match.

"I mean, the guy had the exemption and they still deported him.

"I don't know the details, so I also don't want to be too harsh. But what everyone could read, yeah, he's not vaccinated, but we were told that we can enter the country with an exemption, which he had, and yet he's not here with us.

"Something went horribly wrong. Yeah, it was a true catastrophic situation."

If Djokovic chooses to stay unvaccinated, it remains to be seen whether he will be allowed to contest the other three grand slams - the French Open, Wimbledon and the US Open.

Djere expects his compatriot to respond strongly to adversity.

"That's what he does. That's also in our Serbian mentality," Djere said.

"When we get beat down or we are treated a bad way or how we maybe don't deserve, we just try to - especially him - be inspired by that and gain strength from that."

Djere, who suffered a consecutive fifth first-round exit at Melbourne Park, said he would have no issue with returning to Australia after the Djokovic saga, but admitted it would feel "a little different" in future.

What has the political reaction been in Australia?

Djokovic was using a previous COVID-19 infection as a reason for a medical exemption not to be vaccinated, and while it was approved by a Victorian government and Tennis Australia panel, it was not valid in the view of the federal government.

Speaking on 2GB radio on Monday morning, he said: "The idea that someone could come and not follow those rules us just not on.

"Australia has very clear rules and Australians have been following those rules. That's one of the reasons why Australia has one of the lowest death rates, strongest economies and highest vaccination rates in the world.

"We apply our rules equally in this country, there was a very clear message sent: if you wanted to come, you needed to get vaccinated or you've got to have a valid medical exemption.

"Neither of those were in place. You know, people make their own choices and those choices meant you couldn't come here and play tennis."

On the three-year automatic ban from re-entry into Australia for Djokovic, Mr Morrison said: "I'm not going to sort of precondition any of that or say anything that would not enable the Minister to make the various calls they have to make.

"I mean, it does go over a three-year period, but there is the opportunity for them to return in the right circumstances and that would be considered at the time."

Home Affairs Minister Karen Andrews denied suggestions the country had been made to look "foolish" by the situation.

Speaking on ABC, she said: "I understand that this has played out very publicly but ... Australians can be very confident that the Morrison government and its ministers will do all that they can to ensure we have strong borders."

With Reuters and AAP.