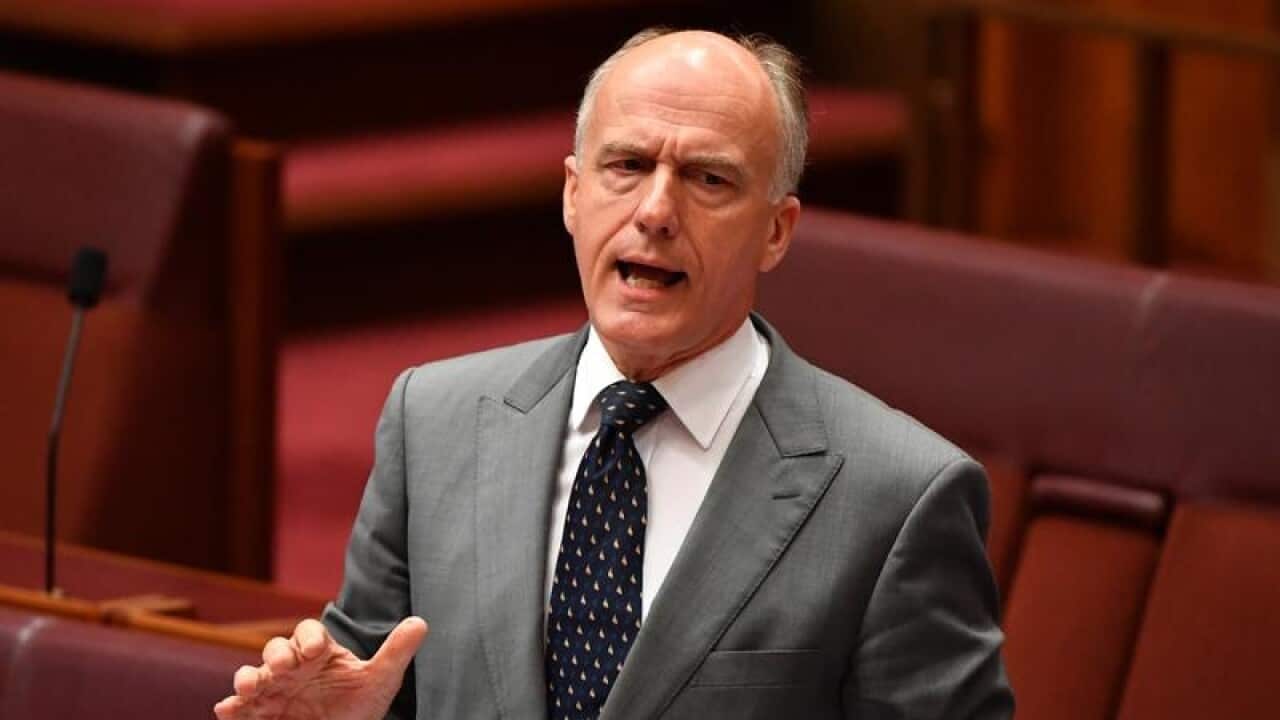 Liberal Senator Eric Abetz has come under fire after a Tasmanian MP used parliamentary privilege to accuse him of "slut-shaming" Brittany Higgins.

Senator Abetz has been accused of saying Ms Higgins endangered Australia's national security by getting "disgustingly drunk". He has categorically denied making the comments.

Ms Higgins, a former Liberal staffer, alleges she was raped by a male colleague in a government minister's office inside Parliament House in March 2019.

She told state parliament she spoke with Senator Abetz on 1 March at a Hobart City Council citizenship ceremony and asked if a federal minister accused of an alleged rape that occurred around 30 years ago was Christian Porter.

"The senator quickly responded that yes, it was the first law officer of the nation, Christian Porter, but not to worry, the woman is dead and the law will protect him," she said.

Mr Porter has denied the allegations against him.

Ms Hickey then claimed that Senator Abetz said: "as for that Higgins girl, anybody who is so disgustingly drunk who would sleep with anybody, could have slept with one of our spies and put the security of our nation at risk'".

In response, Senator Abetz told a Senate committee he "rejected and categorically denied" the "mischievous assertions made under parliamentary privilege".

"To suggest that I'd make light of a rape allegation is horrendous, categorically denied by myself and a full statement will be made."

"Allegations of rape are serious matters and have always been treated as such by me," Senator Abetz said.

Ms Hickey earlier this week was told by the state Liberal party she would not be re-endorsed for the next election.

Ex-Liberal staffer Ms Higgins alleges she was raped by a colleague in the office of Federal Defence Minister Linda Reynolds in 2019. She has since made a complaint to police.

Ms Hickey told parliament she had asked Senator Abetz why security guards hadn't stepped in, given how drunk Ms Higgins appeared to be when she was observed arriving at Parliament House.

"He responded abruptly that if any security member dared to question the validity of access to the parliament by anyone who held a security pass, they would be sacked," she said.

"I felt sick, knowing that the last line of protection for this young woman was not able to be provided due to the practices and protocol of that parliament.

"I accept that these are deeply held views by the senator, however, they are not endorsed by our wider community who view this judgment as slut-shaming.

"I know there are many good men, not only in our community but also in our Liberal Party, who would also find these comments completely unacceptable and out of touch."

Tasmanian Premier Peter Gutwein says he plans to meet with Senator Abetz and described the comments, if true, as "appalling".