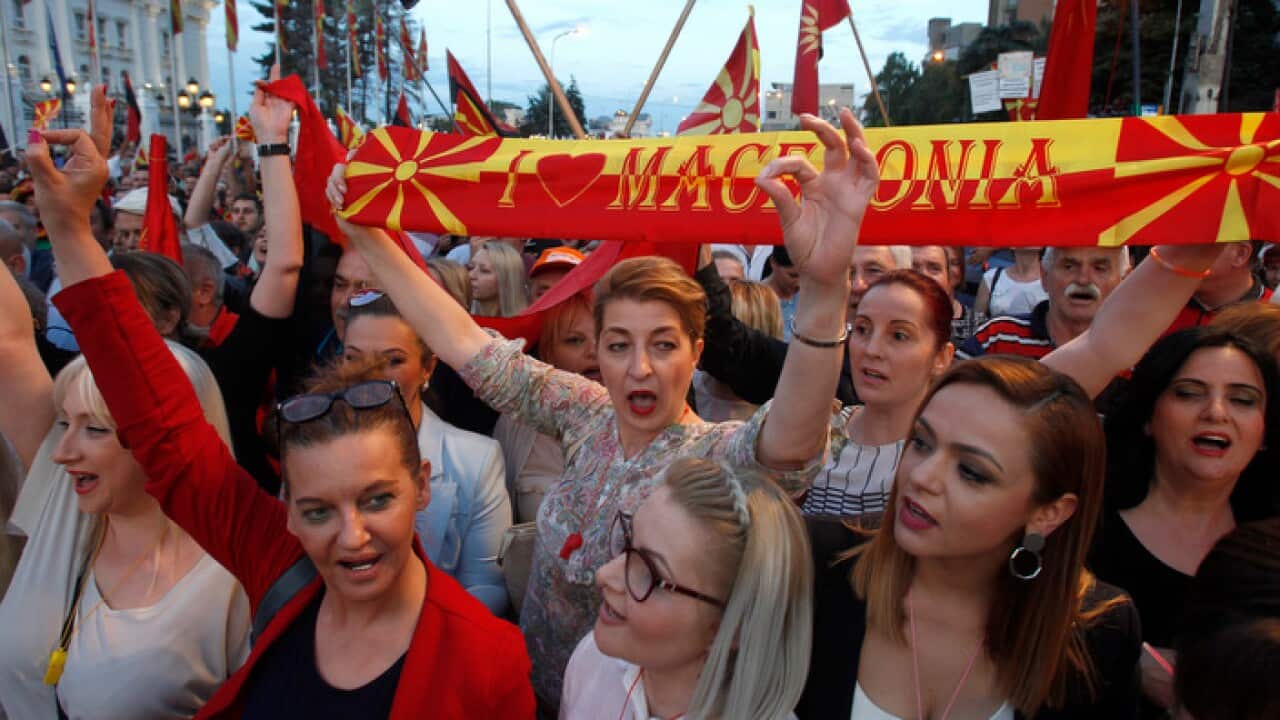 Macedonians are about to vote on changing the name of their country.

Published 13 June 2018 at 5:26am
Source: AFP, SBS
On Sunday, the Former Yugoslav Republic of Macedonia will hold a referendum on changing the country's name to the Republic of North Macedonia, a high-stakes vote aimed at resolving a long-running row with Greece and clearing the path to join NATO and the EU.

The 30 September referendum follows a landmark agreement between Athens and Skopje in June which sought to break the stalemate that has poisoned their relations since 1991 and hobbled Macedonia's integration with the West.

For Greece, the name Macedonia is part of its own cultural heritage and a source of pride as an ancient province that was the core of Alexander the Great's empire more than 2,000 years ago.

While more than 120 countries, including the US and Russia, have recognised the name the 'Republic of Macedonia', Athens has voiced its protest by blocking the country from joining NATO or starting EU accession talks.

Here is some background:

Rejected from the start

Macedonia proclaimed its independence from Yugoslavia in 1991 but its international recognition was immediately blocked by Greece because of the name.

Besides claiming it as part of its heritage, Greece also had a province bordering the new country with the same name and feared Skopje could harbour territorial ambitions.

In 1992, more than a million Greeks joined a rally in the northern city of Thessaloniki, once the most important city in ancient Macedonia, to proclaim "Macedonia is Greece".

It was only with the adoption of a provisional name - the Former Yugoslav Republic of Macedonia - that the country was finally admitted into the United Nations in 1993.

Most other nations, including Russia and the United States, later recognised its constitutional title, the Republic of Macedonia.

Protesters from across Greece converge in Athens to protest a potential Greek compromise in a dispute with neighbouring Macedonia. Source: AAP

In 1994, Greece imposed an economic embargo on Macedonia and prevented it from using the port at Thessaloniki, Skopje's main trading post.

Greece also demanded that Macedonia drops from its flag the rayed sun of Vergina, which it claimed was an ancient Greek symbol, as well as certain articles from its constitution.

But in September 1995 the neighbours signed an accord in New York opening the way for a normalisation of trade and political ties but left the name dispute hanging.

The following month they opened liaison offices in their respective capitals and a new Macedonian flag - with the controversial sun replaced - was raised for the first time at the UN.

In 2001, Greece, the only country in the region with EU, NATO and eurozone membership, expressed support for Skopje, faced by an armed conflict with ethnic Albanian rebels.

Macedonia became a candidate for membership of the EU in 2005 but Greece blocked the start of negotiations.

In 2008, Macedonia presented itself as a candidate for membership of the NATO military alliance under the provisional name but again faced a Greek veto.

Relations sank with the erection of a huge statue of Alexander the Great in Skopje in 2011. Athens viewed it as an attempt to appropriate one of its greatest military heroes.

The controversial giant bronze statue of Alexander the Great in the main square of Skopje. Source: AAP

In 2016, amid Europe's worst migrant crisis since World War II, Athens accused Skopje of using "excessive force" to push back hundreds of migrants trying to cross into Macedonia to continue their journey to northern Europe.

Soon after his election in June 2017, Macedonian Prime Minister Zoran Zaev promised a new push to settle the name dispute and relaunched the drive for EU and NATO membership.

Despite strong opposition from nationalists, negotiations on the name dispute were relaunched in January 2018 under the auspices of the UN.

After several meetings, Athens and Skopje agreed in June that the country will be renamed the "Republic of North Macedonia" and that Macedonia should amend its constitution accordingly.

Macedonians must choose between a new name or a dark future, Prime Minister Zaev has said ahead of the referendum.

If the deal unravels, it will mean "hopelessness, total isolation of the country, probably another chapter of insecurity and instability in the whole region," he said.

A July survey conducted by the US-funded Center for Insights in Survey Research found 57 per cent supported the accord.

The right-wing opposition, VMRO-DPMNE, has stopped short of advocating a boycott, urging the public instead to act "according to their conscience".