Many Chinese girls are pushed into academia rather than football

World Cup Fans looks at some of the nations competing in the 2019 FIFA Women’s World Cup, through the eyes of their fans in Australia. 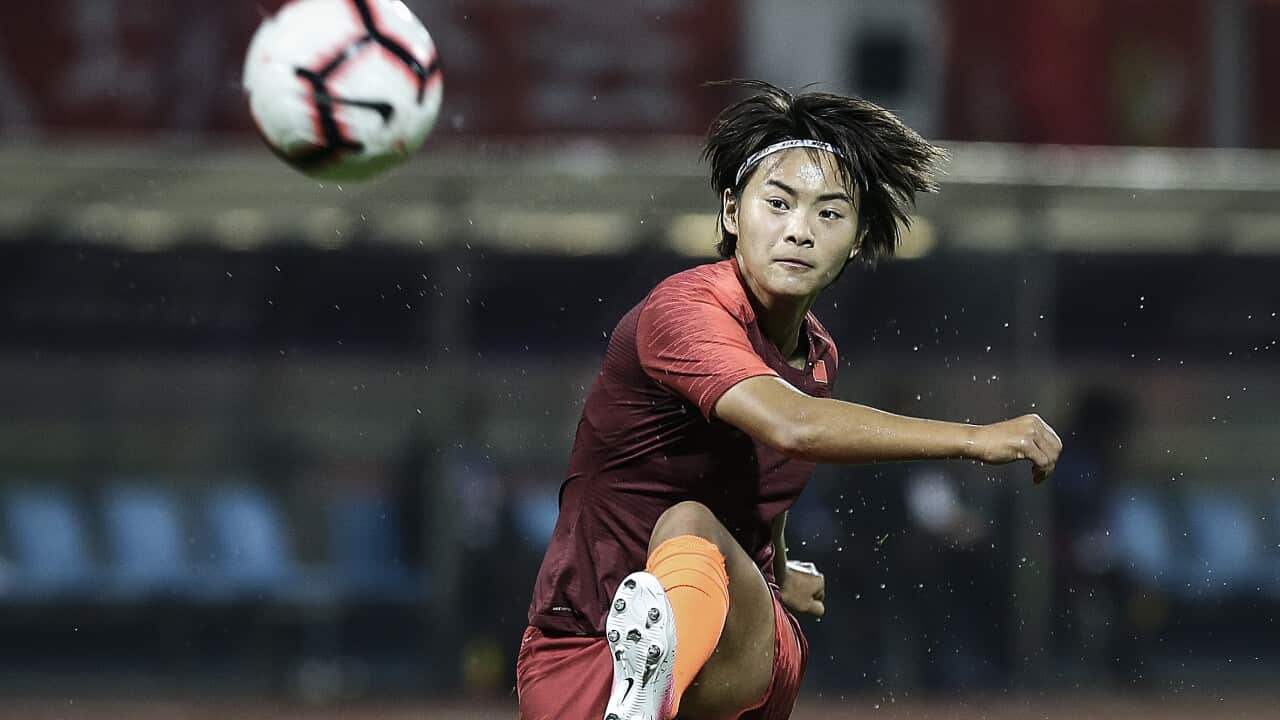 Wang Shuang is the star of the Chinese team Source: Getty Images

The Chinese leadership has proclaimed the ambitious goal of winning the 2050 men’s World Cup. But it’s the women’s team that has come far closer to achieving this milestone.

China heads into the FIFA Women's World Cup in France this month currently ranked 16th - but that belies the country's past successes in the women's game.

The 1999 women's world cup final fought out between China and the USA rewrote the narrative of women’s football. Never before had such a crowd gathered for a women's sporting event. Ninety-thousand watched as the USA claimed its second world crown at the expense of the Steel Roses.

Twenty years later and while the Americans continue to be among the top performers on the world stage, China has suffered a fall from grace.

Moon Xu grew up in China and migrated to Australia as an adult. She now has three children, one of whom, Jenni, plays football at Hurstville Aquatic Centre in Sydney’s south. She’s one of two girls among a sea of boys taking part in the weekend clinic.

“Growing up in China, if I wanted to play soccer I would find it hard,” says Moon. “I was interested in sport but I chose to play basketball when I was in high school. Girls don’t really choose soccer.”

China’s booming middle class has given millions of young boys and girls access to opportunities their parents couldn’t have dreamed of.

Moon says many Chinese girls are pushed into academia rather than sport.

“It depends on your family and your parents and which direction they want you to go. There’s more of a focus on study so there’s not such a heavy focus on soccer and other sports like it.”

Moon says that mentality may have carried over to Chinese diasporas abroad, including here in Australia.

"We live in Hurstville and there are quite a lot of parents sending kids to a tutor and their academics are absolutely very good, especially in mathematics. But for me, sport should be balanced with study. Both are important. Physical development and mental development must be balanced,” she says.

“According to the old way of thinking, women are weak. So if there’s a role model there in football who can be a hero that would be very good. We should be proud of that. We’re proud of female prime ministers like Julia Gillard, because not many people can make it. Theresa May. They are our heroes, too.”

Michael Lee started bringing his daughter Angela to the football clinics in Hurstville about six months ago. Such is Angela’s love of the round ball game, she even convinced her older brother to swap basketball for football, he says.

“Soccer is developing in China now. There are a lot of people aware of soccer now whereas in the past it's more table tennis, swimming, gymnastics. They’re spending a lot of money to try to develop the game. Unfortunately, the men’s team isn’t doing very well but I think the women’s team is doing pretty good,” he says.

“For my daughter, it’s just what she likes. I just want her to be active and she really likes soccer.”

READ MORE
The USA is the best women's football team in the world, but the men get paid more

And there is no shortage of role models for young girls like Angela and Jenni. Both girls say they’ll be supporting Australia and China at the Women’s World Cup but would be torn if both countries faced off against one another.

Wang Shuang is the star of the Chinese team Source: Getty Images

At just 24 years of age, Wang has already earned 94 national caps and could celebrate her 100th should China progress to the quarter-finals in France.

They’ll first have to get past Germany, Spain and South Africa in the group stages as they aim to emulate the feats of the class of ’99.

Read more news from the
Women's World Cup
and see the rest of the stories in the
World Cup Fans series
.

SBS will offer all Matildas matches, the opening game, the quarter-finals, semi-finals and final live, free and in HD. All SBS games will also be live streamed on
The World Game
website and app.