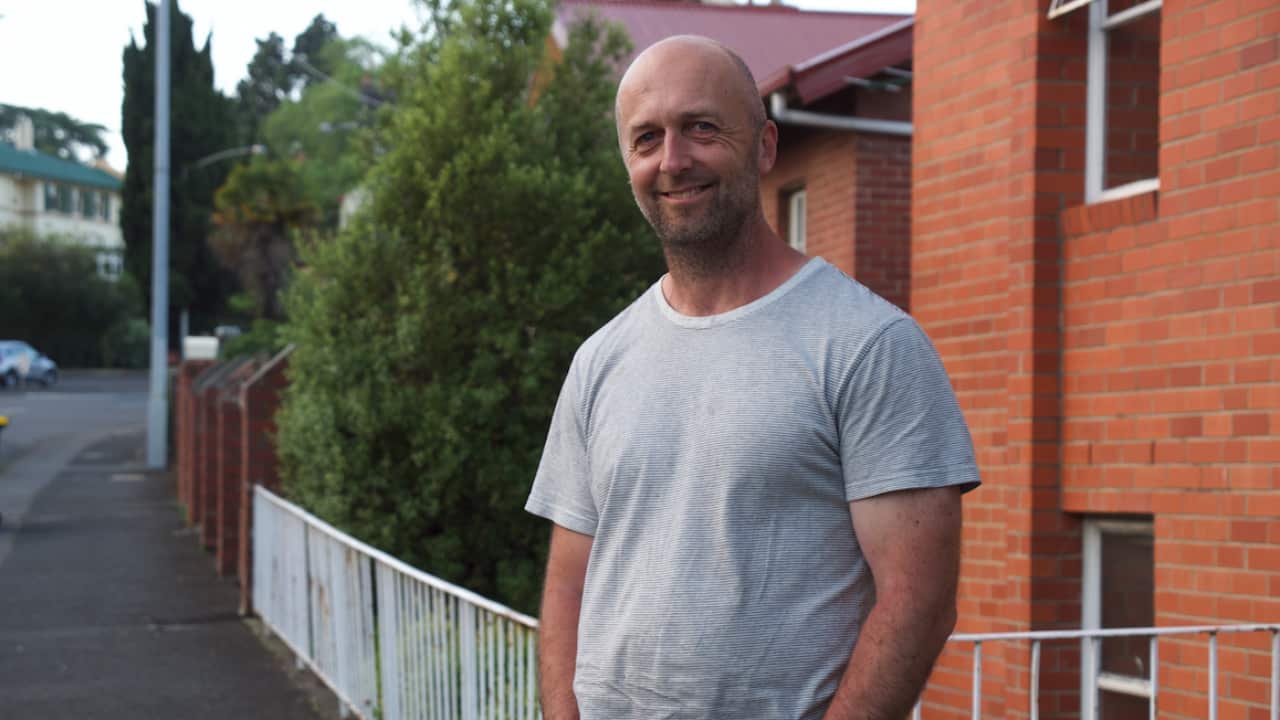 Mark Thomson's unique idea for a podcast series has led him to interview local people born in Iran to Greenland and Japan to Eritrea. He's hoping it will help Tasmanians have a deeper understanding of their state's diversity.

Published Saturday 29 January 2022
By Sarah Maunder
Source: SBS
Mark Thomson has lived in Tasmania since he was a child and says he's seen firsthand how much the state has changed.

"In the last five years, there's been a huge increase in the state's migrant population," the Hobart resident says.

Before the COVID-19 pandemic, he was teaching English to international students and planned to find a job overseas in 2020.

Advertisement
"It was looking good, and then it was all gone."

While in lockdown, he remembered something he'd once heard; that there were people of 177 different nationalities living in Tasmania.

Mark Thomson has set a lofty goal for his podcast series. Source: SBS

"I thought, has anyone tried to find all of these nationalities, or is it just an abstract concept? Can I make this into a reality?

His idea is now becoming a reality, with Mark beginning a podcast series - 177 Nations of Tasmania - and releasing 45 episodes with people from all over the world.

I feel it would be an achievement if I get to 100. - Mark Thomson

Mark's first episode was in June 2020 - an interview with Kadir, from Turkey - and his other subjects have been from countries including Greece, Mexico, Greenland, Nigeria, Eritrea, Romania, and Pakistan.

All of them have shared fascinating insights into their lives and the countries they have arrived from, he says.

"I wanted to platform the different voices we have here in Tasmania and expose people to things they haven't heard before. A lot more understanding can be created through personal stories," he says.

Melika Nejad's episode of the podcast was released in February 2021. Source: SBS

Mark says he finds many of his subjects through word-of-mouth, from speaking to people around Hobart, but it has been harder than he thought.

One of his interviewees was Melika Nejad from Iran. She moved to Tasmania three weeks before the pandemic began and is an architect working towards her Australian registration.

READ MORE
When Rhonda told her son she only had a few months to live, they decided ​to make a podcast

She says the podcast was an opportunity to discuss misconceptions that some people in Tasmania may have about Iran.

"People don't know much about Iran or Persian people, because there aren't many down here."

"They confuse Iran with Iraq or Afghanistan, and they think we speak Arabic - but we speak Farsi."

People don't know much about Iran or Persian people, because there aren't many down here. - Melika Nejad

Melika found a job in Tasmania in 2020, but her husband had to relocate to Adelaide so he could work.

"When I did my interview with Mark, I was so desperate because my husband was in Adelaide and I was here, and there was a lockdown in Adelaide and no one could travel to Hobart.

"But now everything has changed, and I'm so happy because I've found so many friends."

Her husband is also now back in Tasmania.

Eri Mullooly-Hill Konishi has also appeared on the podcast. She first came to Australia in 2015 from Japan.

She started out as a backpacker on a working holiday visa and later married a Tasmanian man.

"I wanted to see Tasmania. I knew how green and how beautiful the nature was here, so I wanted to check it out," she says.

Eri Mullooly-Hill Konishi has lived in Australia for about three years. Source: SBS

On the podcast, she discusses finding it hard to adjust in Australia to how direct people can be, and the difference between conversational styles.

"People [in Japan] are not very clear about what they think in many situations, I find," she says.

"In Japan, we've got this expression, 'Kuuki Yomeru', which means 'read the atmosphere' or 'read the air' - it means you're supposed to guess what the other party is expecting, feeling or thinking. So there's lots of unspoken communication happening in Japanese culture."

SBS News asked the Australian Bureau of Statistics about the claim that Tasmania is home to people from 177 different nationalities.

A spokesperson said at the time of the 2016 Census there were people born in 180 different countries - including Australia - living in Tasmania.

More recent figures from the 2021 Census are due for release later this year.

For Mark, making the podcast has been a learning experience. He's unsure if he'll be able to find one individual from each nationality, but says he wants to keep going nonetheless.

"It's not about the number, it's about the journey, the mission."

The next few episodes will feature people from Ethiopia, Iraq and Jordan.

177 Nations of Tasmania is available on most podcast apps. If you would like to appear on the podcast, email
marktmigration@gmail.com