From evacuating the elderly in a flooded aged care home to jovial singing in the streets, Pacific Islander seasonal workers are bolstering dampened community spirits. 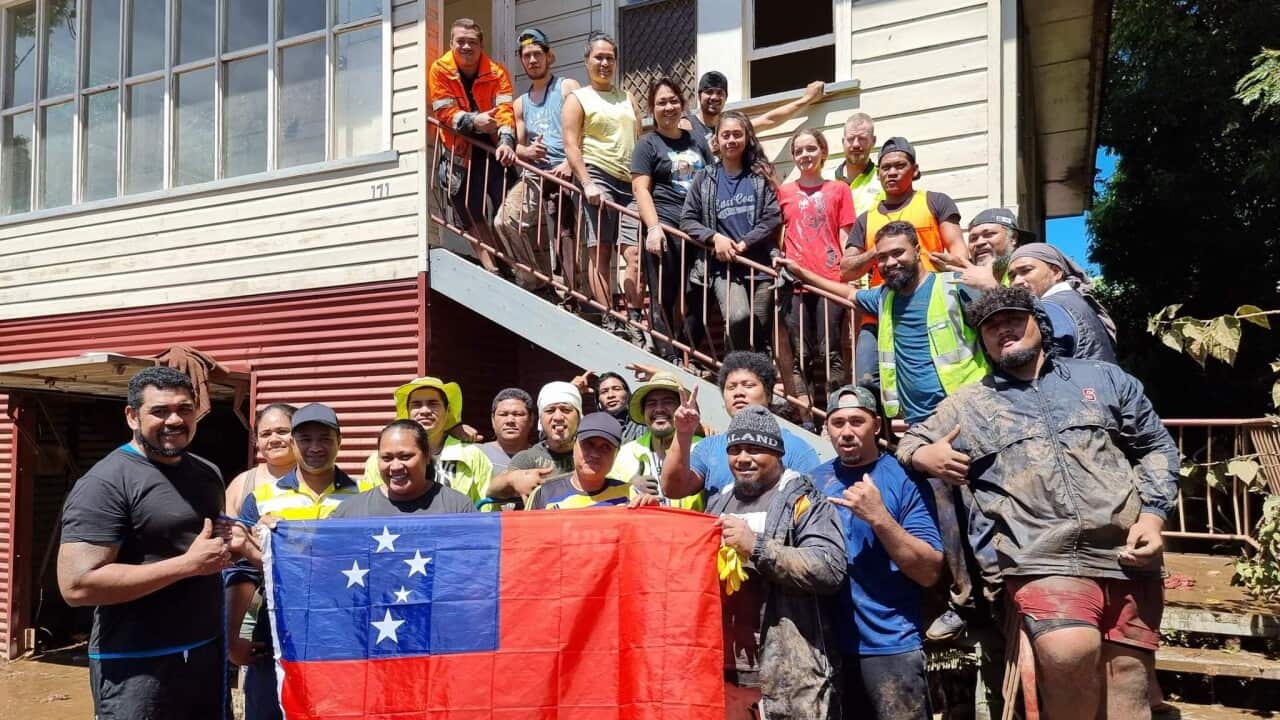 The cleanup has begun for Lismore in northern NSW as the community is left reeling over the loss and devastation caused by floods.

Thousands are without homes, five people have lost their lives and a mammoth effort is needed to rebuild Lismore back after several days of heavy rain and rising waters.

From lifting up community spirits by singing hymns mid-clean-ups, to remaining on-call for any residents who are in need of an extra pair of hands (or 45), these Pacific Islander migrants have been dubbed as true community heroes.

Some 45 Fijian migrants arrived in Australia three weeks ago, expecting to begin work in abattoirs in the suburbs of Booyong and Casino.
But on Monday, when they saw residents scrambling on their rooftops, houses being completely submerged underwater and livelihoods destroyed, they swooped in to help.

Apenisa Marau, 27, is one of the Fijian workers who swapped his shifts at the abattoir for a ride on the SES boats, knocking on every door to rescue people who were stuck in their homes.
The team of Fijian workers collaborated with the state's emergency services during the flood rescue operation. Credit: Facebook/Apenisa Marau
"It was really terrifying ... even though we've had floods in Fiji, we haven't experienced floods as bad as what we actually experienced during the past few days," he told SBS News.

He said an integral part of the Pasifika culture is lending a helping hand when it is needed as a village.

"As Pacific Islanders, people actually depend on each other. So whenever one is in need, you're able to survive because you've got shoulders that you can lean on," he said.
The team split up into groups to work efficiently, clearing out dozens of homes a day once the water subsided. Credit: Supplied/Apenisa Marau
So it was only natural for him and his team to help a community in need.

"It's something we all would do in a time of crisis," he said.

"It's that togetherness in the spirit, but it's just part of our culture to be there as a community."

The team on Monday began with rescuing 60 residents in a Lismore aged care facility RSL LifeCare, "one of the most emotional experiences for the boys".

Mr Marau said they jumped on boats supplied by the SES, carrying as many people as they could to safety - an experience they still speak about together when the days of hard work are done.
A team member carries an aged care resident from the RSL LifeCare to safety in Lismore, NSW. Credit: Brendan Beirne/Media Mode
"Some of them were bedridden, some of them couldn't move in their wheelchair, been put in the boats under the rain, soaking wet ... you could actually see them shivering."

Community members took to Facebook on a local page to thank the Pacific Islander workers, who have been described as Lismore's most loved heroes.

One of them shared a video of the Fijian group singing hymns together during the clean-up efforts - voices that helped soothe a broken community, locals said on social media.
Mr Marau said the group would stop after each house they cleared to stop and sing together to keep their spirits up.

"The more we sing, it lifts our spirits to continue ... working."

'Living here is like we're living in our country'

Samoan workers Van Tamoto Leaula and Keyson Niupulusu said their phones keep ringing; residents in Lismore are relying on them to help clear their homes.

Mr Leula and Mr Niupulusu are just two of the 37 Samoan migrants who arrived in Australia in May last year, working in the abattoirs in Booyong and Casino.
Van Tamoto Leaula (top right) and Keyson Niupulusu (bottom left) stand with their community members during the clean-up efforts in Lismore. Credit: Supplied/Van Tamoto Leaula
They said there were "too many houses to count" that they helped clear; for them, their priority is helping as many people as possible.

Mr Niupulusu said the Samoan support is derived from the respect that is ingrained in Pasifika culture.

"Our culture is mostly based on all of the respect for people," he said.
A group of Samoan men work together to help carry heavy items out of homes.
For the Samoan seasonal workers, the people of Lismore are family.

"We show our respect by helping people and helping our community and spending this year in Lismore, it's like a family to us. Living here is like we're living in our country.

"When we see all the people and children standing [near the water], they remind me of my family."

Casey, 38, has lived in Lismore for almost half of her life. After the floods wiped her entire home, she said she and her family have nowhere to live.
Casey's family said they are "very thankful" for the support the Samoan migrants provided in clearing her home. Credit: Supplied/Van Tamoto Leaula
"When we first got here [to the house], we looked at the damage. I just said, 'we cannot do this on our own,'" she said.

"They [Samoan group] all came and in less than two hours, they cleared the house.

The Seasonal Worker Programme visa will expire after three years - but after seeing the kindness displayed in Australia, some of the Pacific Islander workers said they would love to call Australia home permanently.
READ MORE
These Sikh volunteers drove 34 hours to provide a warm meal for NSW flood victims
"Most of the boys are talking about how friendly everybody right now is. Everybody is just saying hi, beeping their horns ... shouting out 'Fiji, Fiji!'" Mr Marau said.

"The boys are feeling at home right now."

While their current visas are not temporary, the workers have found themselves a special home in a town ravaged by a natural disaster - and can't wait to find more about permanent residency options.
READ MORE
Flood victims have ‘lost everything’ in northern NSW disaster
For now, though, Mr Niupulusu said their priorities right now are simple: pray for Lismore.

"We'd just like to pray for Lismore to be recovered very soon and pray for the safety of our people in our community," he said.
SHARE
6 min read
Published 5 March 2022 at 9:04am, updated 5 March 2022 at 10:11am
By Rayane Tamer
Source: SBS News
Tags
Immigration

Turkey has dropped its veto against Sweden and Finland joining NATO. Here's why