EXCLUSIVE: After a string of suicides, a group of young people tell SBS News it’s time to speak up about what they say is a "taboo" topic in their community. 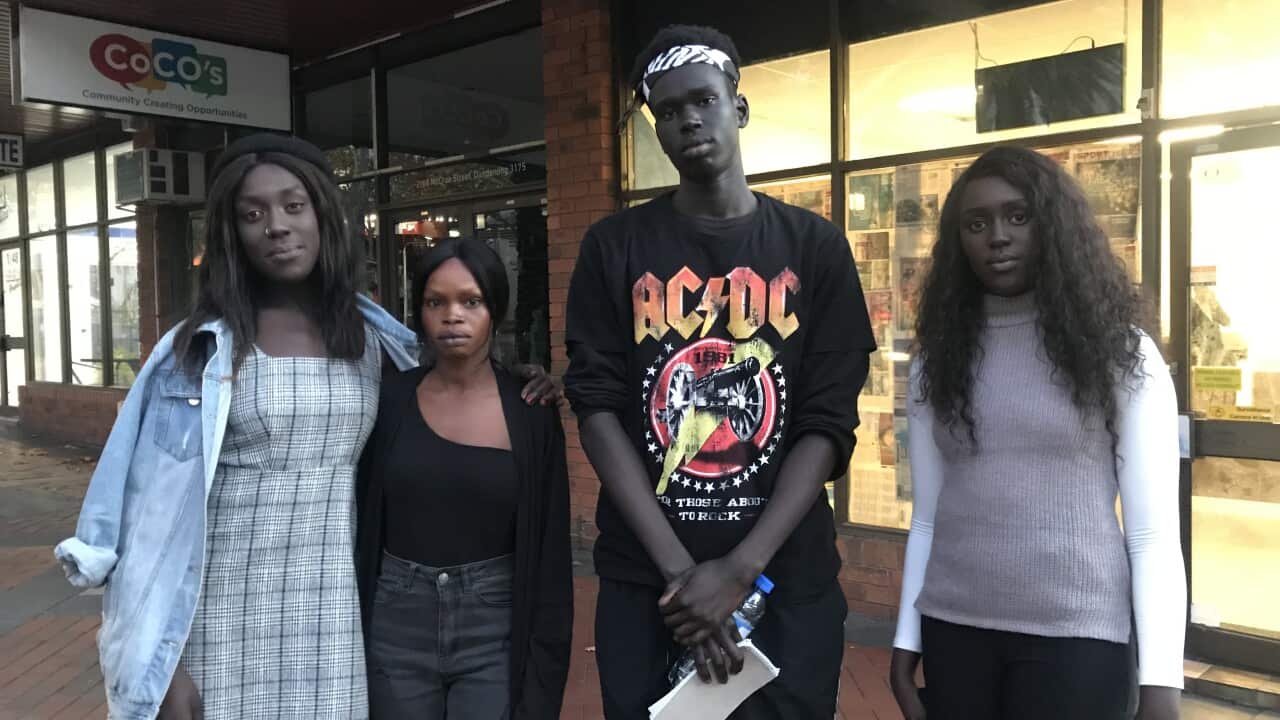 The 32-year-old grew up in the Melbourne suburb of Dandenong, but many of his closest friends from that time are now dead.

Advertisement
“I’ve lost pretty much all my childhood friends ... through depression, mental illnesses and anxieties,” he tells SBS News.

"It still hurts me every day."

The first time it happened was in 2007, when a close friend took his life.

“He was sick, he was going through mental issues. He took towards drinking all the time and smoking.

“There was no help. Family did not understand that black people like us can go through depression.”

"[They say] 'you live in a country where everything is given to you'."

Family did not understand that black people like us can go through depression. - James Luak, 32

Mr Luak moved to Australia as a young child. His family fled war and atrocities in southern Sudan, but like many in his generation, most of his own memories begin with life in Melbourne.

He says suicide has become devastatingly common among his friends, among the children of South Sudanese refugees who came here to seek out a life safe from harm.

“I’ve lost seven friends, believe it or not. Two through car accidents, and the other five through depression.”

It still happens, he says. Like just last month.

“It’s one of the strong boys I grew up with; mentally strong, physically strong. I couldn’t believe something like this [could] happen to him. His funeral was last Saturday.”

“At this stage in our culture, mental health is taboo ... you can’t talk about it.”

But in a small Dandenong office, half a dozen or so young people from the local South Sudanese community say it’s time to change that.

They’re mostly in their early 20s, and they’re tired of losing their friends.

“I don’t want to go to any more funerals.”

Most of the group were born in Australia but mental health and suicide isn’t something they usually discuss, even among themselves.

First, they want to brainstorm, to try and figure out some of the underlying issues. The things that are hurting their peers.

They talk about how there’s no word for depression in the Dinka language and how difficult it is to raise problems with their parents.


Twenty-one-year-old Jacki Tut says it’s hard to compare experiences of casual racism or problems in school to parents whose own youths were marked by the horror of war.

“There’s the trauma competition going, where some kids feel as though their trauma isn’t, you know, at the same level as their parents.  Because obviously, their parents went through a lot worse in the scheme of things.”

“While it is valid, I feel like in the home we don’t feel like it is valid. And if you don’t think depression exists, how am I going to speak to you about it?”

Some kids feel as though their trauma isn’t at the same level as their parents. - Jacki Tut, 21

Another young woman, Jessica Oyay, talks about growing up caught between two cultures and not feeling completely part of either.

“I was born here, but it’s like, even though I went to school with a lot of white kids, I’m not white. I still have outsider mentality … and I feel like our parents don’t understand that, necessarily.”

Then there’s unemployment. Kush Kuiy says this is a big problem particularly for young men of the community, despite high levels of education.

She says a lot of her friends appear to struggle mentally when they can’t get a job. It corrodes their sense of self-worth.

“Unemployment is a factor, it definitely is,” she says.

“It’s like this deep feeling of inadequacy… [as if] I’m not good enough to get a job.”

And then there are the media reports about South Sudanese "gangs".

Twenty-year-old up-and-coming musician Titan Debirioun sees
the "gangs" rhetoric
as a form of sweeping discrimination. He believes those reports have played a role in the community’s collective mental health.

“A hundred per cent,” he says. “I don’t think that you can argue that they haven’t. When you feel like the majority has a certain perception of who you are, that is unjust and unfair, that definitely has an impact on your own health, in general.”

Listening to all of this is mother-of-five and Dandenong-based social worker, Mary Riek.

She wants all three levels of government – local, state and federal – to acknowledge there’s a problem.

And she wants more change within the community: more discussion of mental health, depression and suicide. Less stigma, less shame.

“It’s very hidden, there’s shock in the community and that’s sort of not knowing what to do.”

Last year she tried to organise for groups of young people and parents to talk about mental health.

“We ran about two sessions, but of course, lack of resources, I was doing it with a few women who I approached,” she says.

The sessions dwindled, without funding or support.

“For us, every time, to go and bury our children, it’s really not good. We have to do something.”

In 2017, the most recent yearly figures published by the Australian Bureau of Statistics, 3,128 people died from intentional self-harm, amounting to more than eight people a day.

And young Australians are more likely to take their own life than die in motor vehicle accidents, according to the Black Dog Institute.

The Coroner’s Court of Victoria investigates unnatural deaths and keeps a suicide register, in part to identify high-risk population groups.

When SBS News approached about any known trends among Victoria’s South Sudanese community, they sent this response:

“Unfortunately, we do not have any data readily available regarding suicide in Victoria's South Sudanese Community and our Coroners Prevention Unit is currently at capacity assisting coroners in active investigations.”

“At the moment all we have is anecdotal evidence from the community. [That’s] despite a 2011 parliamentary report suggesting the collection of data such as ethnicity and culture, for people who have passed away from suicide. This hasn’t been implemented.”

But the group of Dandenong youths say it is a real problem. And in such a small community, it affects everyone.

Nikki Deng is the one her friends turn to when they need someone to talk to.

But she’s lost four of them. And she’s terrified of what will happen next.

“The South Sudanese community, we need help. We need a way to deal with this, and we need all the resources we can get.”

Readers seeking support and information about suicide prevention can contact
Lifeline
on 13 11 14 or a local
Aboriginal Health Service
,
Suicide Call Back Service
on 1300 659 467 and
Kids Helpline
on 1800 55 1800 (up to age 25). There are resources for young people at
Headspace Yarn Safe
. Indigenous Australian psychologist services can be found
here
.  More information about mental health is available at
Beyond Blue
.