Dozens of schoolgirls from around Australia are participating in the Curious Minds program, which is aimed at reducing gender inequality in the traditionally male-dominated STEM fields. 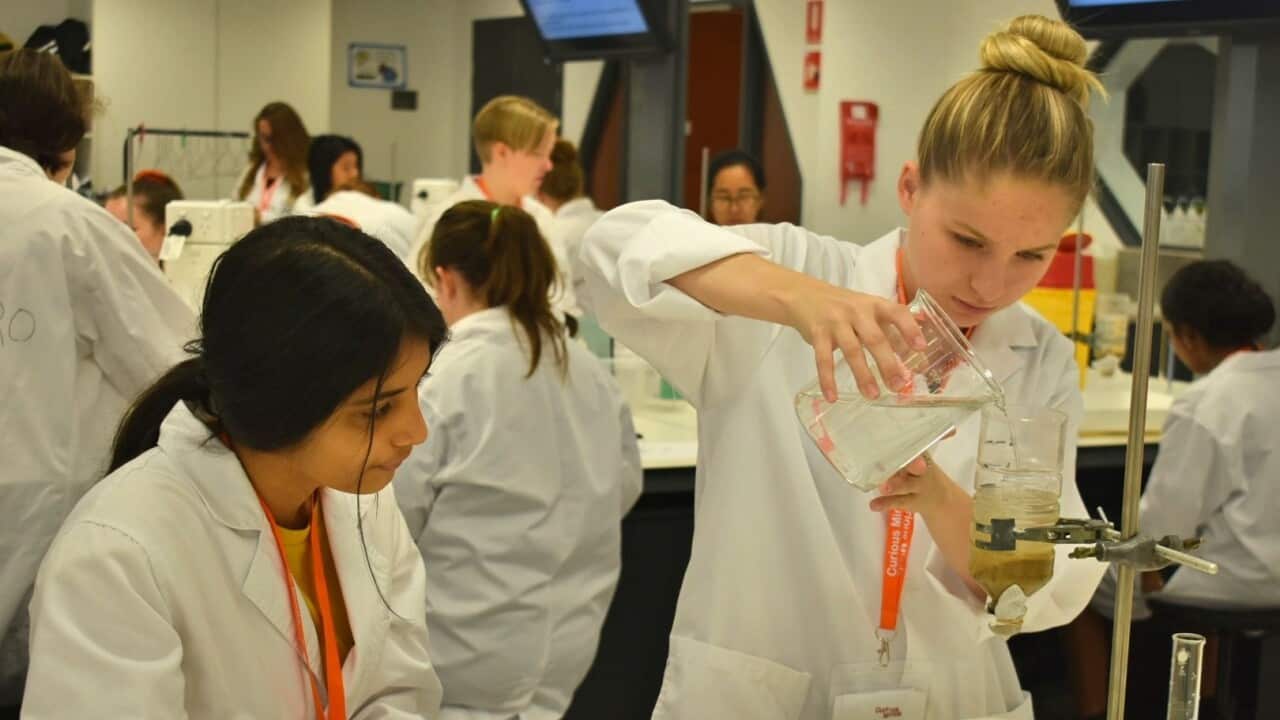 Jireh Alivio has always had a passion for maths and science.

The Year 10 student from the outer Sydney suburb of Campbelltown, who spent her primary school days rote-learning her times tables, will focus on maths, physics and chemistry when she begins her HSC next year.

But she said she is still unsure about what she wants to do beyond high school.

Advertisement
"Maybe more astronomy, like physics," she said. "Definitely more engineering - I guess I was a little bit unsure about engineering because my dad's a doctor so he really pushed for medicine."

"But engineering seems really fun and I think I could be capable of doing that."

That is where a program called Curious Minds comes in.

The program aims to reduce gender inequality in the traditionally male-dominated areas of science, technology, engineering and maths, known as the STEM fields.

Jireh Alivio and 63 other schoolgirls participating in this year's program have been matched with female scientists, engineers and mathematicians who will be their mentors for the next six months.

Along with the mentoring, the Year 9 and 10 students will also attend five days of intensive STEM classes at the Australian National University.

Students in the program model the speed at which the CO2 bubbles rise through liquids of different viscosities Source: SBS / , Curious Minds

Curious Minds program director Kelsie Dadd said it is about empowering the students.

"We aim to show them what's out there, what's possible, how they can get there," she said. "With the role models, we show them that career paths are not linear and there are many ways to do what you want to do."

They have selected participants based on their performances in three high school science, informatics and mathematics competitions.

Chaitanya Shettigara, who has a PhD in mathematics, has signed up to be a mentor for the fourth time.

She said it's important to encourage the girls with a passion for STEM to continue in such male-dominated fields.

"To spark their curiosity and let them know about the kinds of careers that are out there," she said. "There's all of these things that you don't even hear about when you're in school and we can tell them about that.

"They're excited and they want to continue with STEM," she said. "It's very rewarding."

While there is parity between genders in high school STEM subjects, only 16 per cent of STEM graduates from university and vocational education and training are female.

When it comes to further education, only 17 per cent of STEM professors are female, even though around 40 per cent of junior STEM academics are women.

"I think it's fantastic that programs like Curious Minds are here to start girls off and get them interested," Ms Shettigara said.

"But I think another thing that we, as a society, really need to work on is retaining women in STEM fields as they progress through their careers."

While there are large number of young women who study STEM at school, those numbers decline as they enter the workforce Source: SBS / , Curious Minds

Kelsie Dadd, the Curious Minds director, said many factors contribute to the issue, including the lack of support for women who return to work after having children.

But she said there is also a need for a change of culture within the industries.

"There's still, in many STEM areas, that sort of blokey attitude to the workplace culture, where you're expected to work long hours, deals might be done over drinks that you can't attend if you've got children," she said.

"Definitely the numbers drop off as you go up the ladder," she said. "That glass ceiling is still there."