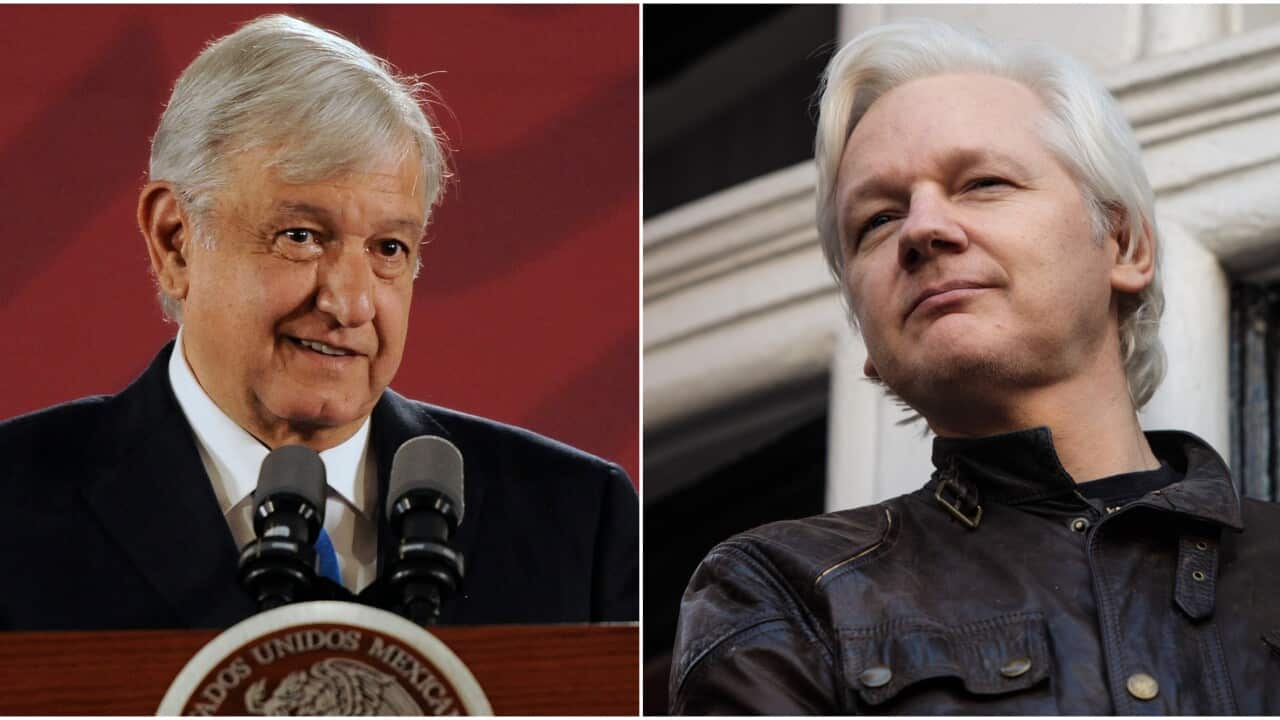 The President of Mexico has expressed his solidarity with Julian Assange, saying he hopes the Australian WikiLeaks founder will soon be pardoned and freed.

Andres Manuel Lopez Obrador said liberating Assange would be a "just cause."

Last year Assange, 48, was jailed for breaching his bail conditions by seeking asylum and staying in Ecuador's embassy in London, where he spent nearly seven years to avoid extradition to Sweden over allegations of rape that were dropped in November.

Advertisement
He was due to be released on 22 September after serving his 50-week sentence, until district judge Vanessa Baraitser ruled there were “substantial grounds” the Wikileaks founder would abscond again.

The President of Mexico has expressed his solidarity with Julian Assange, saying he hopes the WikiLeaks founder will be pardoned and freed. Source: Press Association

He is also battling US attempts to extradite him over Wikileaks' publication of vast caches of leaked military documents and diplomatic cables. He faces a lengthy prison term if extradited to the US.

The full extradition hearing is due to begin on 25 February and is expected to last up to four weeks.

A UN human rights investigator last year said Assange has suffered psychological torture from a defamation campaign and should not be extradited to the United States where he would face a "politicized show trial."

Lopez Obrador expressed his solidarity with Assange and said he hoped the former hacker and activist is "forgiven and released."

The Mexican president told a press conference in his country that cables published by WikiLeaks demonstrated the workings of the global system and its "authoritarian" nature.

"I hope that this is taken into consideration and he is freed and he is no longer tortured," he said.

"There are cables that came to light from when we were in opposition and they spoke about our struggle and I can corroborate that they are true, that is to say what is in them was accurate, they revealed illegal relationships, illegitimate acts, violations of sovereignty, contrary to democracy, against freedoms, this is what is in there.

"So I express my solidarity, and my wish that he is pardoned and that it is considered, that he is liberated he could offer an apology.

"Liberating him will be a very just cause for human rights, it will be an act of humility on the part of the authority that has to decide on the liberty of this journalist."