Minor parties could tip the balance of the next federal election. What are their priorities?

With the federal election one month away, we take a look at the key issues minor parties have been focusing on during their campaigns. 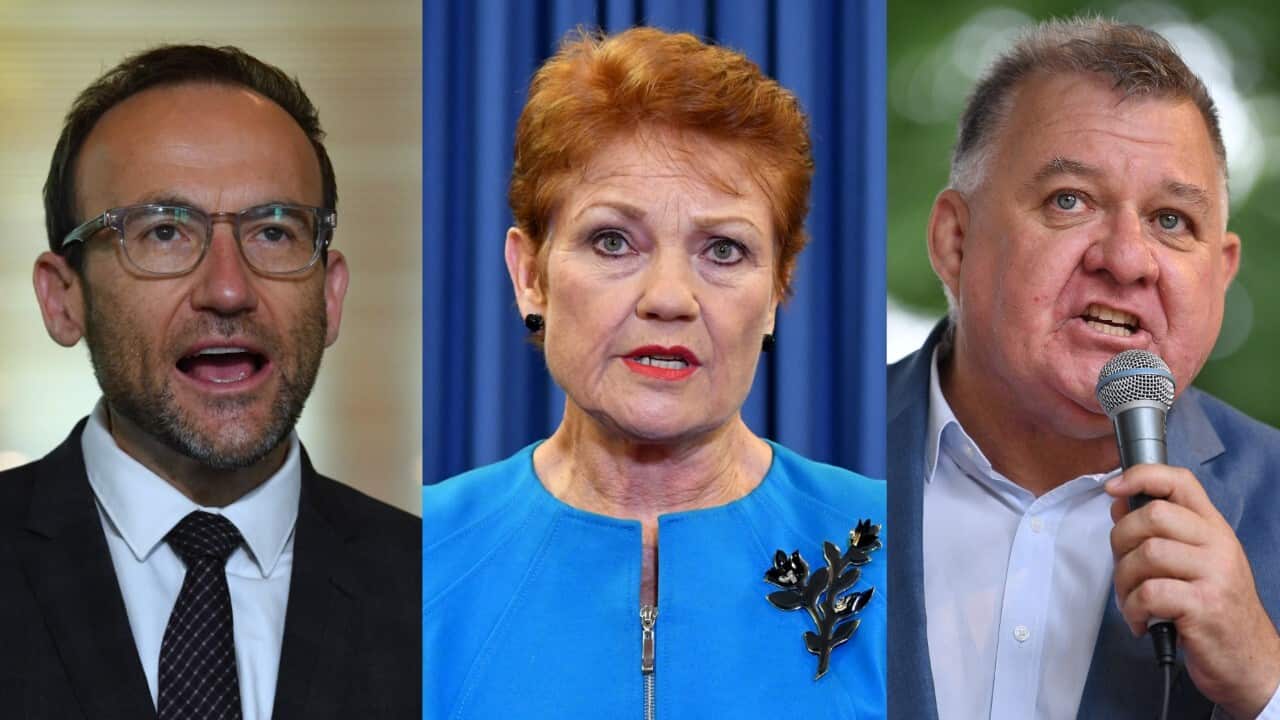 After two years of uncertainty caused by a pandemic, the rising cost of living, climate change and an array of domestic policies, many Australians report they are feeling disengaged with the country's traditional two-party system of politics.

Polls suggest it will be difficult for Labor or the Liberal-Nationals coalition to form a government in their own right, meaning they may have to bargain with increasingly popular minor parties.

These include the Greens, the United Australia Party (UAP) and One Nation: here are some of the policies they are focusing on during this federal election campaign.
Advertisement

The Greens: Climate, cost of living and offshore processing

In the last election, the Greens were the third most popular party by vote, retaining the seat of Melbourne held by Adam Bandt, and nine senators in parliament.

The Greens' policies are based on four key principles: ecological sustainability, grassroots democracy, social justice, and peace and non-violence.

For the 2022 election campaign, they've adopted the slogan: "Tax billionaires and big corporations and provide the things we all need for a better life."
READ MORE
What politicians can and can't do with their political ads
According to the Greens, these "things" are: a treaty with First Nations peoples, replacing coal and gas with 100 per cent renewables, free dental and mental healthcare, free education and affordable housing.

Despite a coalition between Labor and the Greens still on the cards, Mr Bandt has criticised Labor's stance on climate and its support for asylum seeker boat turnbacks and offshore detention facilities.

Mr Bandt said last week that he welcomes the entrance of climate independents into the election race, as "the more voices pointing out Labor and the Liberal's poor record on climate, the better".

Mr Bandt criticised the Liberal and Labor parties for wanting to open 114 new coal and gas mines, calling it a "climate crime".
READ MORE
Adam Bandt says Greens would 'make Clive Palmer' pay for your dental care, blasts media's 'gotcha' questions
Mr Bandt said the Greens want to fix the cost of living, with a proposal to impose an extra 6 per cent tax on Australian billionaires, who he said during the COVID-19 pandemic profited more than billionaires in any other country in the world, with Australian billionaires more than doubling their wealth in that period.

Mr Bandt also said one in three of the biggest corporations in Australia pays no tax.

"When a nurse pays more than a multinational, something is wrong," Mr Bandt told the ABC.

The UAP reportedly spent more than $80 million in the 2019 federal election, failing to pick up a single seat. Mr Palmer said it plans to spend upwards of $70 million during this campaign.

Led by outspoken MP Craig Kelly, who resigned from the Liberal Party before joining, the UAP adopts an anti-establishment political stance.

"Our people are chalk and cheese, compared to Labor and Liberal candidates of the professional class, we come from all walks of life and understand issues facing their local communities," Mr Kelly said during a visit to the Riverina region.

The UAP has been strongly critical of lockdowns and vaccine mandates during the pandemic. Based on its "freedom first" approach to Australian politics, the party wants to end lockdowns and restrictions on freedom of movement and trade between states.

It has also been critical of conventional treatments of COVID-19, including vaccines. The UAP opposes vaccine passports which it calls divisive and damaging to mental health.

"It is undemocratic and wrong to deny any Australian their constitutional rights and freedoms because they choose not to take part in a vaccination program for personal or medical reasons," the UAP states on its website.

The party is pushing for a maximum of 3 per cent interest on home loans.

The UAP claims Liberal and Labor’s "trillion dollars of debt" will increase home loan rates to 4 per cent in two years and to over 6 per cent in three years.

To deal with the nation's debt, the UAP wants to impose a protectionist policy around natural resources, including a 15 per cent export license on the export of Australian iron ore, with a focus on exports to China.

Earlier this month, party leader Craig Kelly was egged by a woman in Melbourne Park who yelled at him to "stop hanging out with Nazis" and called him an "anti-Semite".

Senator Pauline Hanson's One Nation Party has recently been focusing on transgender issues, along with their usual issues, such as reducing Australian refugee intake. Source: AAP / DARREN ENGLAND/AAPIMAGE
The One Nation party was launched by Pauline Hanson in 1997, and claims to be an "Australia first" movement that fights against "foreign agendas" and stands up for the "freedom" of Australians.

Currently, One Nation has two representatives in parliament: founder Pauline Hanson and Malcolm Roberts, who are both Queensland senators.

One Nation is strictly against opening borders to refugees. The party says they believe in "reducing the refugee intake for five years in an effort to redirect critical funding to Australian services".

One Nation supports the withdrawal of Australia from the United Nations 1951 Refugee Convention.

The party also wants Australia to withdraw from the United Nations 2016 Paris Agreement on climate change, which strives to limit global warming to between two and 1.5C.

While scientists around the globe and the UN's Intergovernmental Panel on Climate Change (IPCC) have warned that the goal is paramount for the future of the next generations, One Nation has called the agreement "economic suicide" and that there isn't sufficient evidence to justify it.

"We know that the majority of people believe in man-made global warming caused by carbon dioxide and other greenhouse gases. This belief is reinforced by media coverage of events like forest fires and droughts, but government policy needs to rest on the evidence and there is a growing concern about the evidence on which the claims of man-made global warming rests," reads the One Nation website.

Party members have made headlines recently over transgender issues, such as reactions to the comments made by Liberal candidate Katherine Deves when she compared her lobbying against transgender athletes to standing up against the Holocaust.

When Treasurer for NSW Matt Kean condemned Ms Deves' comments, One Nation's Mark Latham called Mr Kean a "she-man" and said the "promotion of transgender is worrying for our society".

Do you have an election question you’d like answered? Or a story you’d like us to cover? Email politics@sbs.com.au
SHARE
7 min read
Published 22 April 2022 at 6:00pm
By Tom Canetti
Source: SBS News
Tags
Politics