More than 2,000 Myanmar anti-coup protesters have been released from jail by the junta

The junta has been under pressure to release the thousands of people detained during protests since it ousted the elected government in February. 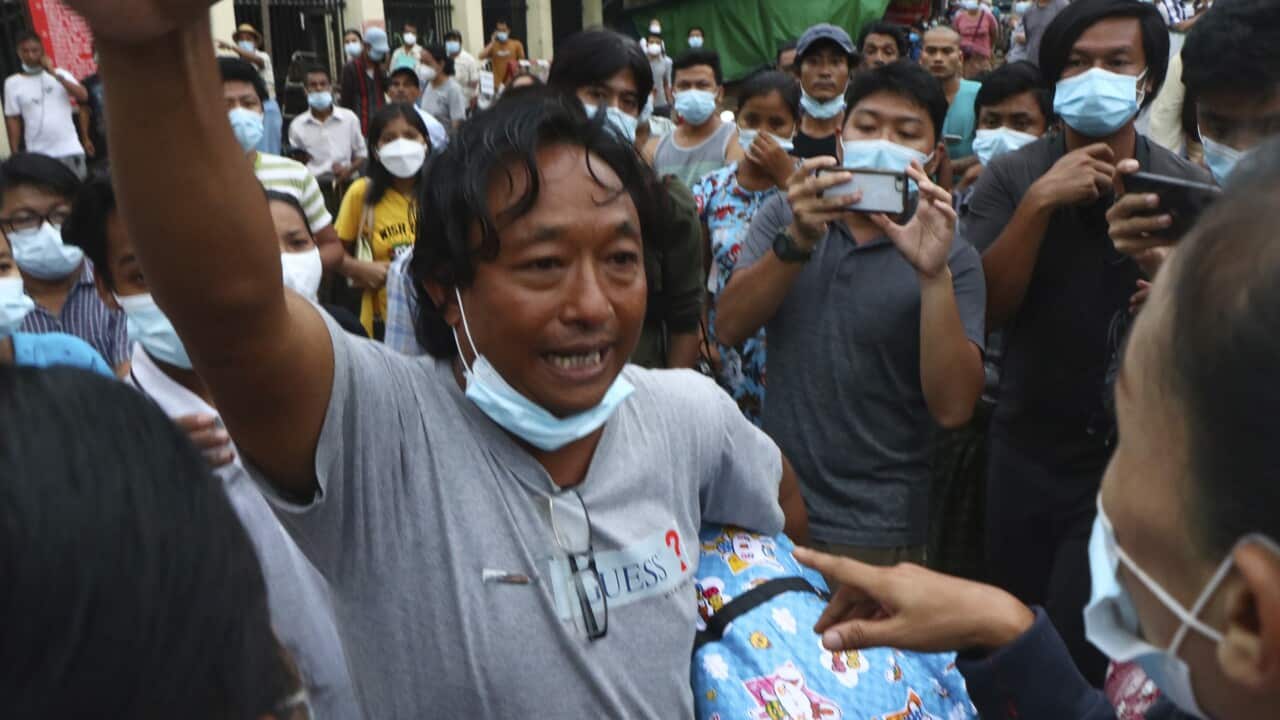 A man raises his hand after walking out of Insein Prison in Yangon, Myanmar. Source: AP

Myanmar authorities have released more than 2,000 anti-coup protesters from prisons across the country, including local journalists jailed after reporting critically on the junta's bloody crackdown.

Myanmar has been rocked by massive protests and a brutal military response since the February coup that ousted former leader Aung San Suu Kyi and her government.

More than 880 civilians have been killed in a crackdown by the State Administration Council - as the junta calls itself - and almost 6,500 arrested, according to a local monitoring group.

After authorities announced the release, a crowd of at least 200 people gathered outside the colonial-era Insein prison in Yangon hoping a loved one might be released.

Pressing up against the barricades, many held umbrellas to shelter from light rain, footage on local media showed, with one woman holding a flower.

One man waiting outside the prison for his daughter, a protester, said he was "very proud of her".

"I will encourage her to fight until they win," he said.

By the evening a total of 2,296 protesters had been released from prisons around the country, the junta's information team said in a statement.

As buses pulled out of Insein to take detainees to local police stations where they were due to be released, those onboard flashed the three-finger salute - a popular protest symbol - through the windows.

Journalist Kay Zon Nway of Myanmar Now was among those freed from Insein, the news outlet said in a statement.
A man is hugged by two women after being released from Insein Prison in Yangon. Source: AP

She said she had experienced "many things," in the notorious jail, but added that she would explain later.

United States journalist Danny Fenster is being held at the same prison after being detained on 24 May.

There were no foreigners among those released from Insein on Wednesday, a prison official told the AFP news agency on condition of anonymity.

Ye Myo Khant, a 20-year-old photojournalist for the Myanmar Press Agency, was freed Wednesday after a 120-day detention.

"I was reporting when they unjustly arrested me," he said.

While the release will be welcomed by individuals and reunited families, it "will do nothing to blunt popular resistance to military rule", Richard Horsey, senior advisor on Myanmar to the International Crisis Group said.

People wait behind barricades for their relatives to be released outside the main entrance of Insein prison compound in Yangon, Myanmar. Source: EPA

"They should never have been detained. We should also remember that some of these people have faced brutal interrogations and torture that will leave lasting damage, visible and invisible."

In February,
the junta released around 23,000 prisoners
, with some rights groups at the time fearing the move was to free up space for opponents of the military as well as to cause chaos in communities.

Ousted leader Ms Suu Kyi, who has been under house arrest since the coup, asked the people of Myanmar to stay "united" in the face of military rule, her lawyers relayed Tuesday as she reappeared in a junta court.

The Nobel laureate, and daughter of independence hero General Aung San, has been invisible to the outside world bar a handful of courtroom appearances.

Ms Suu Kyi, 76, has been hit with an eclectic raft of charges. She could face more than a decade in prison if convicted on all counts.