The mother caught the prime minister's attention at the Eid prayers in Parramatta, where he began the fourth week of his election campaign. 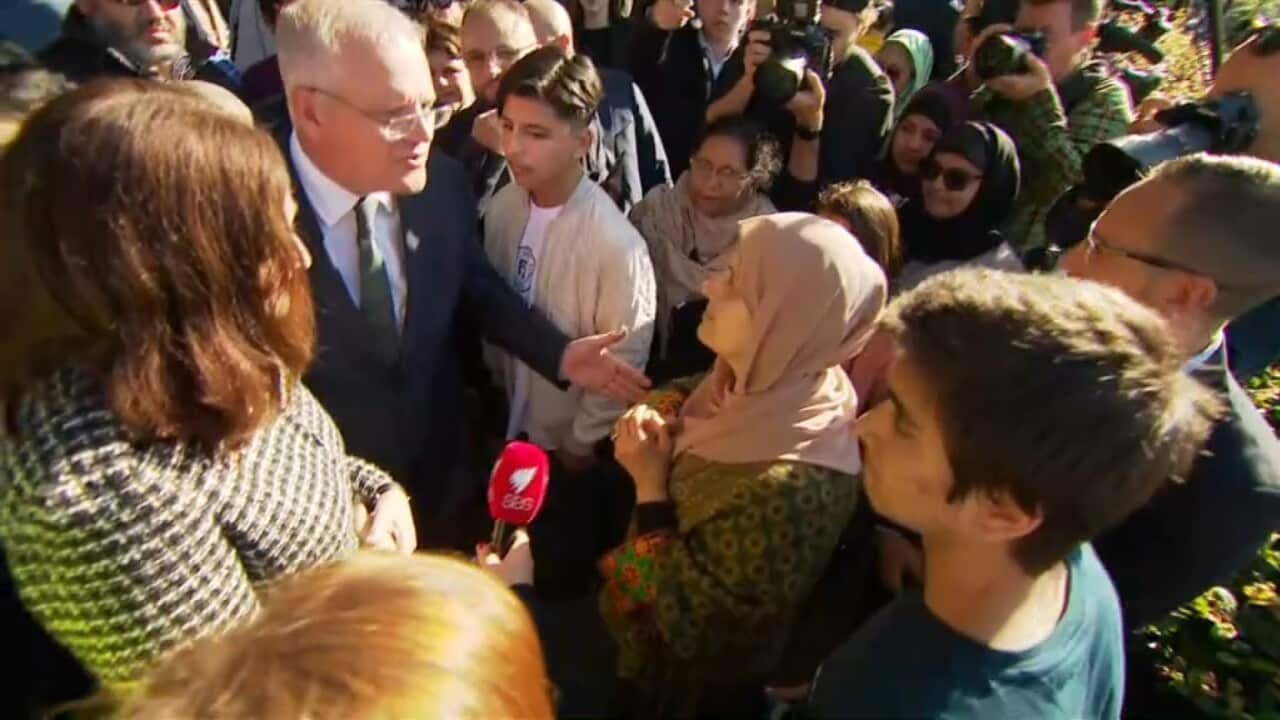 An Afghan mother has made a tearful plea to Prime Minister Scott Morrison during his election campaign visit to Eid prayers in Sydney, asking for help to fast-track visas for her family under threat from the Taliban.

The federal government has set aside
26,500 places in the humanitarian program for arrivals from Afghanistan over the next four years
, and 5,000 places for family members.

Advertisement
But it has had more than 180,000 applications for the humanitarian program and the
Department of Home Affairs has conceded there is a significant backlog in processing the requests
.

Hijara Taufiq’s daughter-in-law has been stuck in Afghanistan, unable to come to Australia, and her extended family have been facing threats and physical harm from the Taliban.
“Please help us,” she asked the prime minister after he was mobbed by the crowd at the Eid Prayer event where many were taking selfies and wanting to meet him.

“We will do everything we can,” Mr Morrison responded to her.

“We are bringing thousands and thousands of people from Afghanistan.”

Mr Morrison said local Liberal candidate Maria Kovacic would assist in taking down her details and try to help pursue the issues she was raising.

The Immigration Minister Alex Hawke was also present at the event.

The prayer event was held on an oval in the seat of Parramatta and was attended by hundreds of Muslim community members, marking the end of the holy month of Ramadan.

Parramatta is a marginal seat, currently held by Labor MP Julie Owens, which has a sizeable Afghan population.

Scores of Afghans who were evacuated to Australia, including former ADF interpreters, were resettled in some of the surrounding suburbs in this seat, as well as the Labor held seat of McMahon.

Ms Owens is retiring and Labor has parachuted in candidate Andrew Charlton, who was also in attendance at the Eid prayers.

Labor leader Anthony Albanese said Australia's visa processing delays are an example of "a gutting of the public service".

Mr Albanese, who was in Brisbane, was asked whether he would expedite the processing of visas for asylum seekers and refugees in Afghanistan who are desperate to flee the country.
"In so many areas there are just longer and longer and longer delays," he said.

"That is why one of the reasons why we have said we will have increased support for the public service."

The Morrison government has previously been criticised over the delay of visa processing by advocates who fear for the safety of people in limbo in Afghanistan.
Share
3 min read
Published 2 May 2022 at 11:29am, updated 2 May 2022 at 1:33pm
By Anna Henderson, Shuba Krishnan, Rayane Tamer
Source: SBS News