NSW MPs erupted into cheers after a bill to decriminalise abortion passed the lower house but religious groups have already come out against the bill. 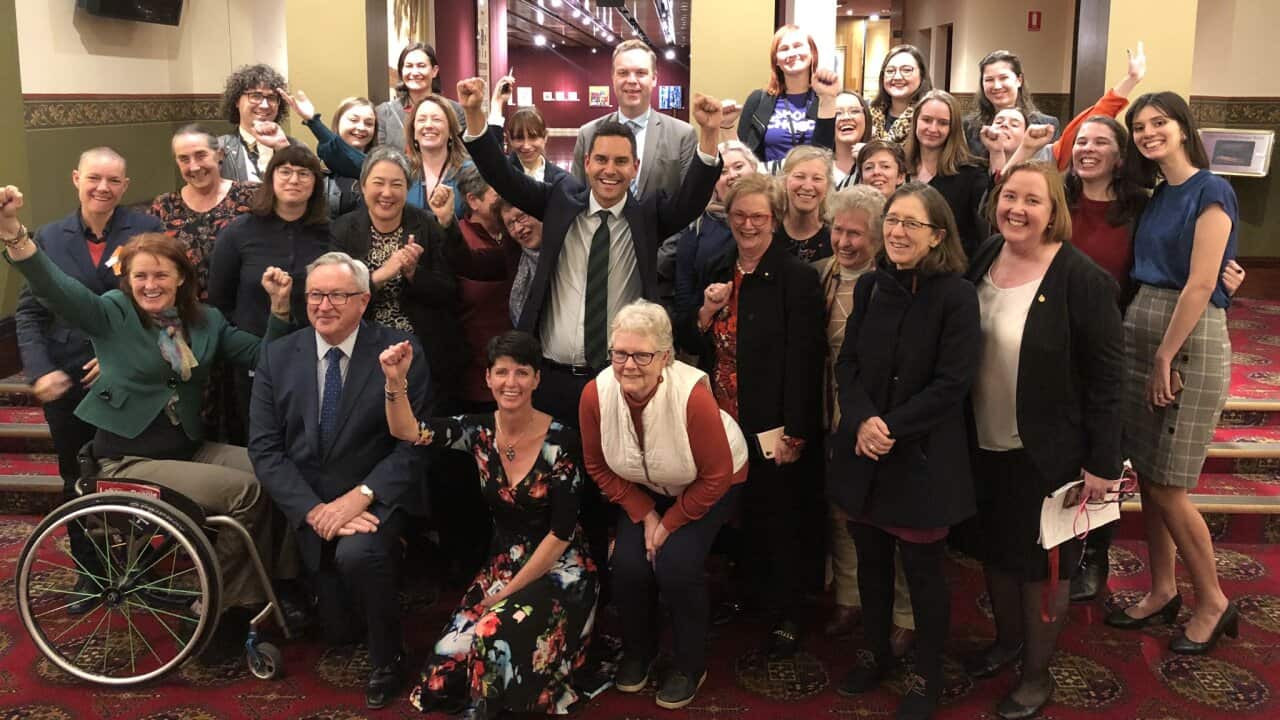 New South Wales MPs voted in favour of the bill 59 to 31, with many cheering and clapping after the bill was passed. Source: Alex Greenwich / Twitter

Members of NSW's lower house erupted into cheers as a bill to decriminalise abortion passed its first hurdle after three days of lengthy and passionate debate.

The private member's bill to remove abortion from the NSW criminal code passed the lower house late on Thursday night after three long days of debate and several amendments.

Members of NSW's lower house erupted into cheers as a bill to decriminalise abortion passed its first hurdle after three days of lengthy and passionate debate. Source: Alex Greenwich / Tiwtter

Advertisement
MPs voted in favour of the bill 59 to 31, with many cheering and clapping after the bill was passed.

Health Minister Brad Hazzard, one of 15 co-sponsors of the bill brought by independent MP Alex Greenwich, urged his colleagues to support the draft laws when he kicked off debate on Tuesday.

"The people's representatives in the NSW parliament have the opportunity to right a wrong that was enacted into law 119 years ago," he said.

"I ask all members to consider whether it is acceptable, whether it is conscionable, that in making this major life decision, women and their doctors have to do so with the threat of being charged with a criminal offence."

Greens MP Jenny Leong, another co-sponsor, said she was outraged the bill had taken so long and offended that so many men believed "that they have the right to make laws that dictate what we do with our bodies".

"The sound of men arguing over our personal reproductive health choices hurts my ears and it offends my very core," she said on Tuesday.

But several MPs raised concerns over late-term abortions and a provision relating to conscientious objection by medical practitioners, as well as the amount of time given to consult on the bill.

Member for Mulgoa Tanya Davies speaks during amendments to the introduction to the Reproductive Healthcare Reform Bill 2019. Source: AAP

Treasurer Dominic Perrottet, who spoke "on behalf of those who cannot speak for themselves", said supporters of the bill were on the wrong side of history.

I believe the purpose of this parliament is not to be a platform for the privileged but a voice for the voiceless vulnerable who cannot speak up for themselves. On this issue the supporters of this bill are ignoring that obligation," he said on Tuesday night.

Police Minister David Elliott said the bill wasn't an election issue and the timing had been "completely mismanaged".

However, proponents of the Reproductive Health Care Reform Bill 2019 face further hurdles as it will now be sent to the upper house for consideration.

The bill is fiercely opposed by anti-abortion and religious groups.

Sydney's Catholic Archbishop Anthony Fisher said he is "deeply saddened" the bill passed the lower house and described it as "abhorrent".

"If a civilisation is to be judged by how it treats its weakest members, New South Wales failed spectacularly," the Archbishop said in a statement on Thursday night.

"I urge the Members of the Legislative Council (upper house) to vote against this abhorrent bill."