The military has imposed martial law in parts of Yangon amid anti-coup protests, as an activist group says at least 20 demonstrators were killed on Monday. 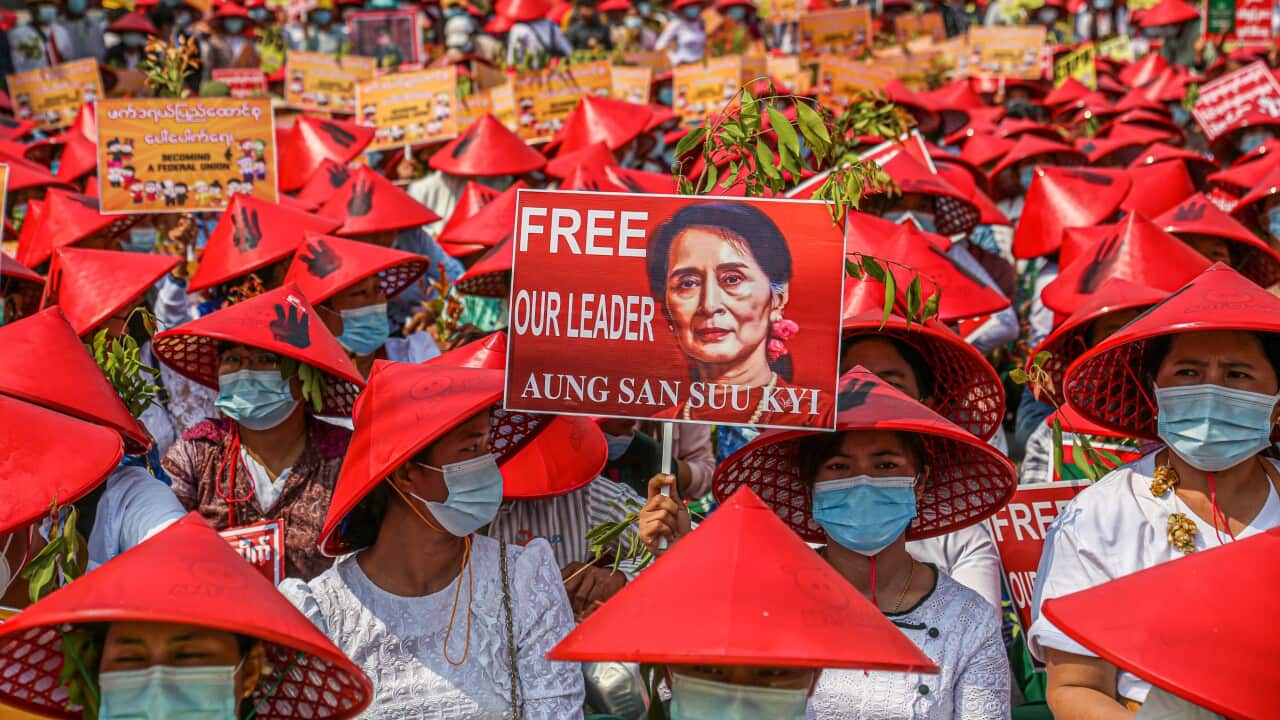 Supporters of detained elected leader Aung San Suu Kyi took to the streets again despite the killing of dozens of protesters on Sunday in the bloodiest day since a military coup on February 1 ignited mass demonstrations nationwide.

Marches took place on Monday in the second city Mandalay and in the central towns of Myingyan and Aunglan, where police opened fire, witnesses and media reported.

READ MORE
'People were shot before my eyes': At least 39 killed in one of Myanmar's deadliest days since coup

The Assistance Association for Political Prisoners (AAPP) said at least 20 people were killed on Monday in shootings by security forces. The Myanmar Now media outlet reported protests across the country, including in the Yangon district of Hlaingthaya, the scene of unrest and arson attacks the previous day.

A journalist in Mandalay said one person was shot dead there after a big protest had passed peacefully.

A junta spokesman did not answer calls requesting comment and Reuters could not independently confirm all the casualties.

The AAPP said 74 people died on Sunday, many of them in demonstrations in Hlaingthaya, a factory area.

In total, 183 people have been killed by security forces in the weeks of protests against the coup and the casualties were drastically increasing, the group said.

In Washington, the US State Department said the military's violence against protesters was "immoral and indefensible".

United Nations Secretary-General Antonio Guterres urged the Myanmar military to allow a visit by his special envoy to help calm the situation and set the stage for dialogue and a return to democracy.

Military commanders in Yangon would take over administration of districts, including the courts, MRTV said.

The courts martial had the authority to hand down the death sentence or long prison terms for a range of offences. These included treason and dissent, obstructing the military or civil service, spreading untrue information, and crimes related to unlawful association.

The army said it took power after its accusations of fraud in the 8 November election won by Suu Kyi's National League for Democracy were rejected by the electoral commission. It has promised a new election but has not set a date.

READ MORE
Australia joins US, India and Japan in vowing to restore democracy in Myanmar as death toll rises

The military has ruled Myanmar for most of the years since independence from Britain in 1948, and cracked down hard on previous uprisings before agreeing to the latest attempt at a transition to democracy, now derailed.

Ms Suu Kyi, 75, has been detained since the coup and faces various charges, including illegally importing walkie-talkie radios and infringing coronavirus protocols. Last week, the junta accused her of accepting illegal payments but she has not yet been charged with that.

The Nobel peace laureate was due to face another virtual court hearing on Monday but her lawyer, Khin Maung Zaw, told Reuters the session could not go ahead because the internet was down. The next hearing would be on 24 March, he said.

Western countries have called for Ms Suu Kyi's release and condemned the violence and Asian neighbours have offered to help resolve the crisis.