Naftali Bennett is a self-made tech millionaire who dreams of annexing parts of the West Bank and takes a hardline stance against Iran. 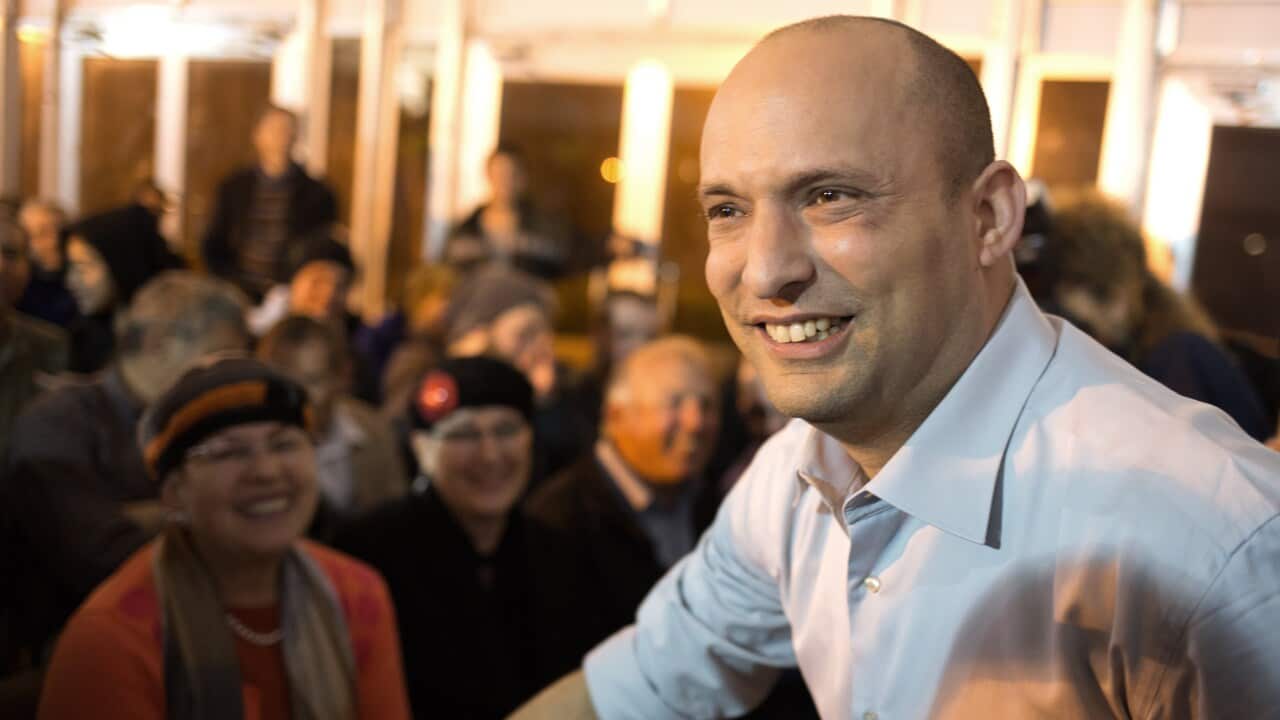 Naftali Bennett, who on Sunday moved a step closer to replacing Israel's veteran premier Benjamin Netanyahu, is a multi-millionaire former tech entrepreneur who made a name in politics with hardline religious-nationalist rhetoric.

The 49-year-old, who has made pitches to hard-right voters throughout his career, leads the Yamina party, which has called for Israel to annex parts of the West Bank.

Mr Bennett is ultra-liberal on the economy and takes a hard line against Israel's arch-foe, Iran.

Advertisement
He shares this ideology with Mr Netanyahu and has served in several of the Likud leader's governments, but in recent years the two have become increasingly opposed.

In the aftermath of 11 days of deadly fighting with Palestinian militants in the Gaza Strip, Mr Bennett finally agreed to join centrist Yair Lapid in a coalition to oust the premier, who has been in power for 12 consecutive years as well as an earlier three-year term.

In a speech late on Sunday, Mr Bennett claimed leftist parties would back him to lead a coalition government.

"The left is making far from easy compromises here, when it bestows upon me... the role of Prime Minister," he said.

Mr Lapid has until late Wednesday to cobble together a 61-seat coalition in the 120-seat Knesset.

Religious-nationalist Yamina won seven seats in the country's last general elections in March, although one member has refused to join an anti-Netanyahu coalition.

A former special forces commando, Mr Bennett is the son of US-born parents and lives with his wife Galit and four children in the central city of Raanana.

He entered politics after selling his tech start-up for $145 million in 2005, and the next year became chief of staff to Mr Netanyahu, who was then in opposition.

After leaving Mr Netanyahu's office, Mr Bennett in 2010 became head of the Yesha Council, which lobbies for Jewish settlers in the West Bank.

He then took politics by storm in 2012 when he took charge of the hard-right Jewish Home party, which was facing annihilation.

He increased its parliamentary presence fourfold while making headlines with a series of incendiary comments about the Palestinians.

READ MORE
As decades-old tensions spiral out of control, what is the endgame for Hamas and Israel?

In 2013, he said "Palestinian terrorists should be killed, not released".

He also argued that the West Bank is not under occupation because "there was never a Palestinian state here", and that the Israeli-Palestinian conflict could not be resolved but must be endured, like a piece of "shrapnel in the buttocks".

He re-branded Jewish Home as Yamina (Rightward) in 2018, and was part of Mr Netanyahu's coalition which collapsed the same year.

But he was not asked to join a Netanyahu-led unity government in May last year - a move seen as an expression of the premier's personal contempt towards him, despite their shared ideology.

In opposition and with the coronavirus pandemic raging in 2020, Mr Bennett dampened his right-wing rhetoric to focus on the health crisis, moving to broaden his appeal by releasing plans to contain the virus and aid the economy.

"In the next years we need to put aside politics and issues like annexation or a Palestinian state, and focus on gaining control over the coronavirus pandemic, healing the economy and mending internal rifts," he told Israel's widely listened-to army radio in November.