Navy relocation plan criticised as a 'ploy for votes'

Prime Minister Kevin Rudd's plan to shift the navy base from Sydney to Brisbane by 2030 has been criticised by the Coalition as a ploy for votes. 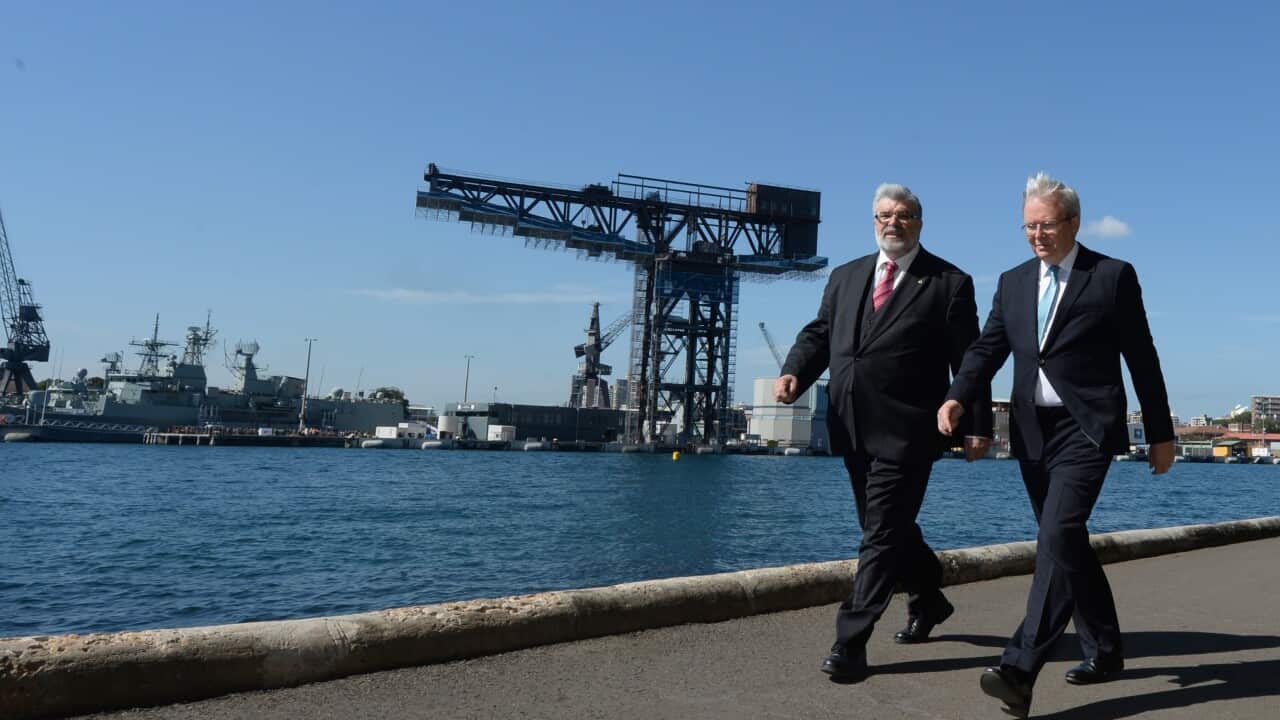 Prime Minister Kevin Rudd and Minister for Industry Kim Carr walk to a press conference near Garden Island naval base in Sydney. (AAP)

The federal opposition has criticised the Prime Minister's plan to relocate the navy's main east coast base from Sydney to - most probably - Brisbane.

A re-elected Labor government will appoint a top-level defence committee to examine how to move the navy's main east coast base from Sydney to Brisbane by 2030.
Advertisement
Mr Rudd says Australia's strategic priorities lie in the north and so the nation's bases should be moved there to allow for greater co-operation with US and other Asia-Pacific partners.

The Prime Minister says it also makes economic sense to free up the current base on Sydney's Garden Island for tourism.

But Opposition leader Tony Abbott says the announcment is just a play for votes.

"Any change in the basing of our naval forces should be driven by military imperatives not by political imperitives," Mr Abbott says.

"If you look at the announcement that Mr Rudd made this morning first of all it's all in the never-never. It's maybe possibly, perhaps doing things in ten of 15 or 20 years time and it seems to be tailor made for marginal seats."

Labor's proposal is in line with the 2012 Force Posture Review, which recommended a longer term alternative to Fleet Base East, at Sydney's Garden Island.
It suggested Brisbane as the most likely prospect.
Mr Rudd said if the government was returned it would set up a Future Navy Taskforce to advise on the plan's timing and implementation.
It would consider moving "some or all" of Fleet Base East to Queensland and upgrading ports at Darwin and Broome. It might also consider shifting some Sydney activities to Fleet Base West in Perth.

Defence force chief General David Hurley and defence department secretary Dennis Richardson would co-chair the taskforce, which would include navy chief Vice Admiral Ray Griggs and would report back in two years.

"The government would expect the relocation of fleet elements north and west to be completed by 2030," Mr Rudd said in an address to the Lowy Institute in Sydney on Tuesday.

The coalition said Mr Rudd had provided no costings and the project would cost billions.

"It could cost anything up to several billion dollars and cost several thousand jobs in NSW," opposition frontbencher Christopher Pyne said.

NSW Premier Barry O'Farrell said it would be devastating for the state's economy and navy families.

Garden Island injects about $470 million a year into the state economy and employs 6700 people, including up to 4000 on the base.

The plan was politically motivated, opposition frontbencher and MP for Wentworth, Malcolm Turnbull said. His electorate takes in Garden Island.

"This is just another desperate effort to shore up support in Queensland," Mr Turnbull said.

Mr Rudd rejected this, saying the plan was based on long-term strategic and economic goals.

"This would include a major strategic decision to deploy the navy's most important ships where they will be best placed to protect Australia's interests and quickly respond to challenges," he said.

The relocation of Fleet Base East would provide economic benefits for both NSW and Queensland, Mr Rudd said.

Garden Island could be redeveloped as open space or berths for the burgeoning cruise ship industry.

There would be defence industry and infrastructure jobs.

The naval presence in Darwin, Perth, Townsville and Cairns would also be expanded, creating new jobs and business opportunities, he said.