Nick Kyrgios has taken out Greek fourth seed Stefanos Tsitsipas in a fractious third-round encounter to storm into the last 16 at Wimbledon. 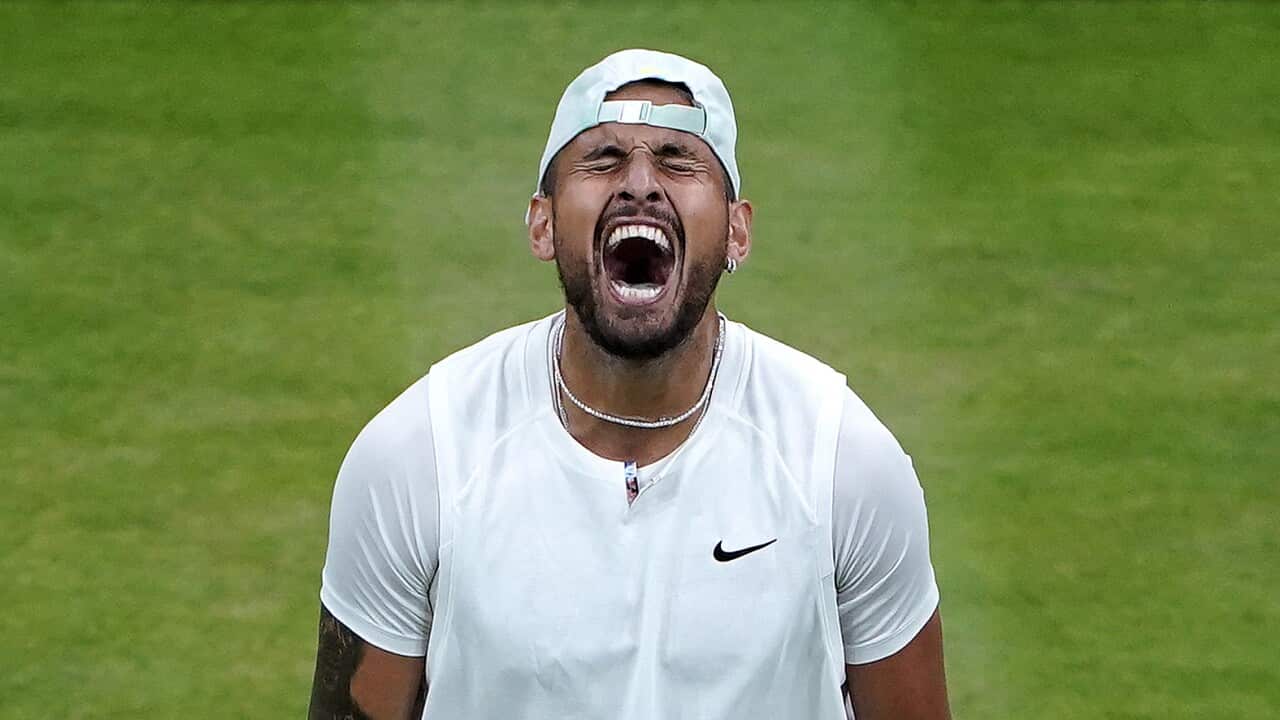 Nick Kyrgios's Wimbledon prospects have soared after the enigmatic talent overcame an injury scare and an all-too-familiar running battle with officialdom to upend Stefanos Tsitsipas in a tempestuous, drama-charged third-round encounter.

Kyrgios demanded Tsitsipas be defaulted for recklessly hitting a ball into the stands, narrowly missing a female spectator, before removing the world No.5 himself with a fractious 6-7 (2-7) 6-4 6-3 7-6 (9-7) victory on Saturday.

The Australian hot-head threatened a sit-down protest after Tsitsipas only received a code violation for back-handing a ball in frustration into the stands after losing the second set on Court One.

Advertisement
"You can't hit a ball into a crowd and hit someone and not be defaulted," Kyrgios bellowed at chair umpire Damien Dumusois over and over, while pointing out to the Frenchman that Novak Djokovic was booted out of the 2020 US Open for striking a lineswoman with a ball.
"I would like to speak a supervisor. I'm not playing until I speak to a supervisor," demanded Kyrgios .

"Bring out more supervisors. I'm not done. Bring them all out."

Grand slam supervisor Andreas Egli was having none of it.

It wasn't long, though, before Wimbledon referee Gerry Armstrong and his assistant Denise Parnell were sighted anxiously watching on from behind the court.

Netflix is producing a documentary featuring Kyrgios and Tsitsipas and the streaming service would have been salivating at the content that two of tennis's most polarising figures dished up.
Kyrgios's blow-up after Tsitsipas's indiscretion was merely part of the theatre.

Kyrgios also called the chair umpire a disgrace and received a code violation after being reported by a linesman for swearing.

Tsitsipas, who had Australia's former finalist Mark Philippoussis in his courtside box, complained to Dumusois that "this isn't tennis" and copped a point penalty for smacking a return off a Kyrgios under-arm serve deliberately into the scoreboard.
Kyrgios also left his fans' heart-in-mouth after falling awkwardly in the opening game of the fourth set and staying down for seemingly an age, clutching his right hip.

But he eventually rose to have the last laugh, recovering from a set down to defeat Tsitsipas for the fourth time in as many tour outings and advance to the last 16.

"I felt like the favourite coming in. I played in a couple of weeks ago but I knew it was going to be a tough match," Kyrgios said.

"He was getting frustrated at times - it's a frustrating sport. You all think you can play, but it's very frustrating.

"I've got ultimate respect for him. Whatever happens on the sport, I love him and I'm close to his brother so ..."

Kyrgios didn't drop serve all night, saving all five break points he faced, and crunched 14 aces in another imperious serving display that will place his rivals on notice.

A quarter-finalist on debut as a teenager in 2014, the 27-year-old will play unseeded American Brandon Nakashima on Monday for another place in the last eight.

If he wins that, Kyrgios could meet Alex de Minaur in an all-Australian quarter-final - potentially for the right to take on Rafael Nadal in the semis.
Share
3 min read
Published 3 July 2022 at 7:41am
Source: AAP
Tags
Sport