The Capertee RFS Brigade is on the frontline, battling one of the country’s largest bushfires. This is what it’s like being a firey as Australia suffers through a horrific bushfire season. 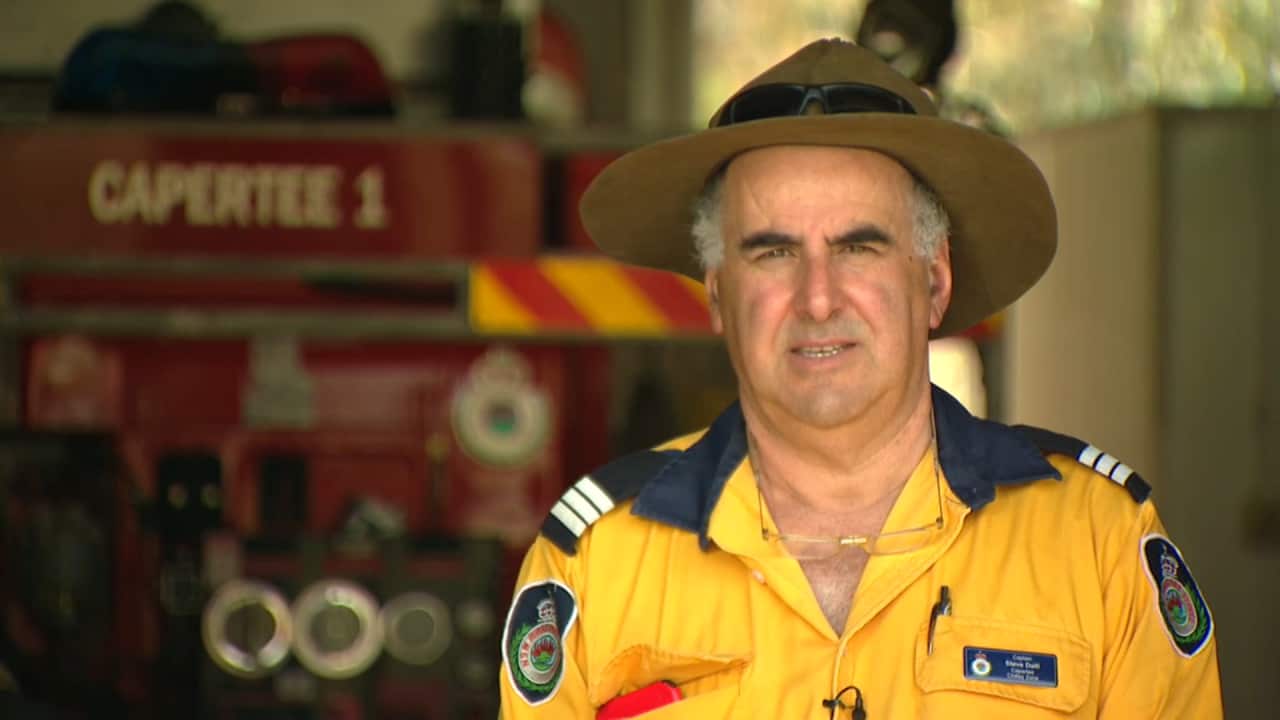 Steve Dalli is the Captain of the Capertee RFS Brigade. Source: SBS News

For more than 70 days, firefighters from Capertee Rural Fire Service Brigade have been on the line, battling fierce blazes threatening their tiny village of about 150 people.

"When you have a fire like this, there is no clock-on and clock–off,” Brigade Captain Steve Dalli told SBS News.

"You try and get sleep when you can - if you're lucky enough you get six hours sleep. Some days you get no sleep at all. It all just depends (on) where the fire is, the commitment and the urgency."

Advertisement
Making matters worse, the bridge lacks a modern water bulk carrier – forcing them to travel back and forth to the
fireground to refill as they fight fires.

RFS volunteers gather ahead of an operation. Source: SBS News

"We had issues on Saturday and that was taking over an hour while spot fires were sparking up. It's not acceptable. We don't have town water,” the captain said.

The veteran RFS firey said he had repeatedly asked for more resources, fearing the brigade would soon be caught out as Australia weathers horrific bushfire conditions.

On the front line

The Gospers Mountain, which probably started from a single ignition, grew into one of the season’s most devastating bushfires and has destroyed an area seven times the size of Singapore.

The tiny township of Capertee, which sits above the world’s widest canyon, has been at the forefront of the blaze since it broke out.

"The black represents the burnt area - that's been burnt out. It's up to 511,000 hectares so it's one of the largest fires that's happened in Australia," Captain Dalli told SBS News at the brigade station, pointing to a map of the area.

At one point Captain Dalli's pager goes off, forcing him to halt his interview with SBS News.

"I've just got to get that," he explains

Even a quiet day with mild weather could turn into action stations for the crew at any given moment.

"FireCom, FireCom, this is Capertee station, over," the captain says, using the main dispatch centre’s callsign.

As he awaits a response, the crew begin to gear up in case of a call out.

"Lesley, you're OK to go with me if they need us?" the captain asks.

The team are eventually told to stand down, but in this horror season, these tense moments are almost non-stop. The crew is constantly on alert.

"Fire com, fire com, this is Capertee station, over," he says through a radio.

As he waits for a response, he checks that his colleagues are OK to head out to a potential firefront.

The firefighters are on constant on standby in case of any flare-ups. Source: SBS

"All it takes is one radio message and we'll go. They're straight onto the firefront,” Captain Dalli said.

This week has seen some rain and milder conditions. But that offered little reprieve for the team, who remain on high alert and continue to patrol the area on the lookout for spot fires.

But firefighter Wally Bodnor reckons it’s a breeze compared the long days spent on the fire-front.

"It's draining when you're holding a hose full of water and you're running up and down the hills and you're pulling hoses 20 or 30 metres through the scrub to try and put out a fire here, there and everywhere," he told SBS News.

The small village of Capertee sits above the Capertee Valley, the widest canyon the world. Source: SBS

"The worst times are at the night when you're out fighting a fire because your wife is home on her own, you're not sure if the fire is going to cross, so it's always on the back of your mind - that things might go wrong."

On constant standby, on the watch for any flare-ups, every brigade member has missed precious family time – including Christmas and New Year’s Eve.

"I didn't want to let my crew down so I turned up,” she said.

"Some days you go out there and don't know whether you are going to come home or not.

Local stations like Capertee may be small, but their work is crucial.

Captain Dalli said a precarious backburn carried out last week was pivotal in stopping the spread of the Gosper's Mountain mega-fire when temperatures reached the high 40s.

"It was one of the most significant tactical back burns that was carried out to contain the fire. If that tactical backburn was not successful there was the potential for this fire to continue for another two weeks three weeks, months, until it rained,” he said.

Often confused with the non-fire season “hazard reduction burn”, a backburn sees firefighters try and turn or stop a fire by lighting a new fire from containment lines.

That day, Captain Dalli believes, his team "dodged a bullet" when they came dangerously close to running out of water.

He believes it all comes back to the bulk carrier the brigade desperately needs – and with the fire season only halfway through, the need for such a resource could soon be desperate.

"When you have a fire like this, there is no clock-on and clock –off,": Brigade Captain Steve Dalli. Source: SBS News

“Well if you're looking at social media and these people out there pouring millions and millions of dollars into this RFS firefighting fund,” he said.

“I hope somewhere up there listens to me - boots on the ground - and says, “we need this bulk water tanker here”.”