No quarantine for New Zealanders arriving in Victoria, as travel bubble bursts into other states

Travellers from New Zealand have arrived in Victoria, Tasmania, South Australia and Western Australia despite the state governments refusing to participate in the trans-Tasman travel bubble arrangements. 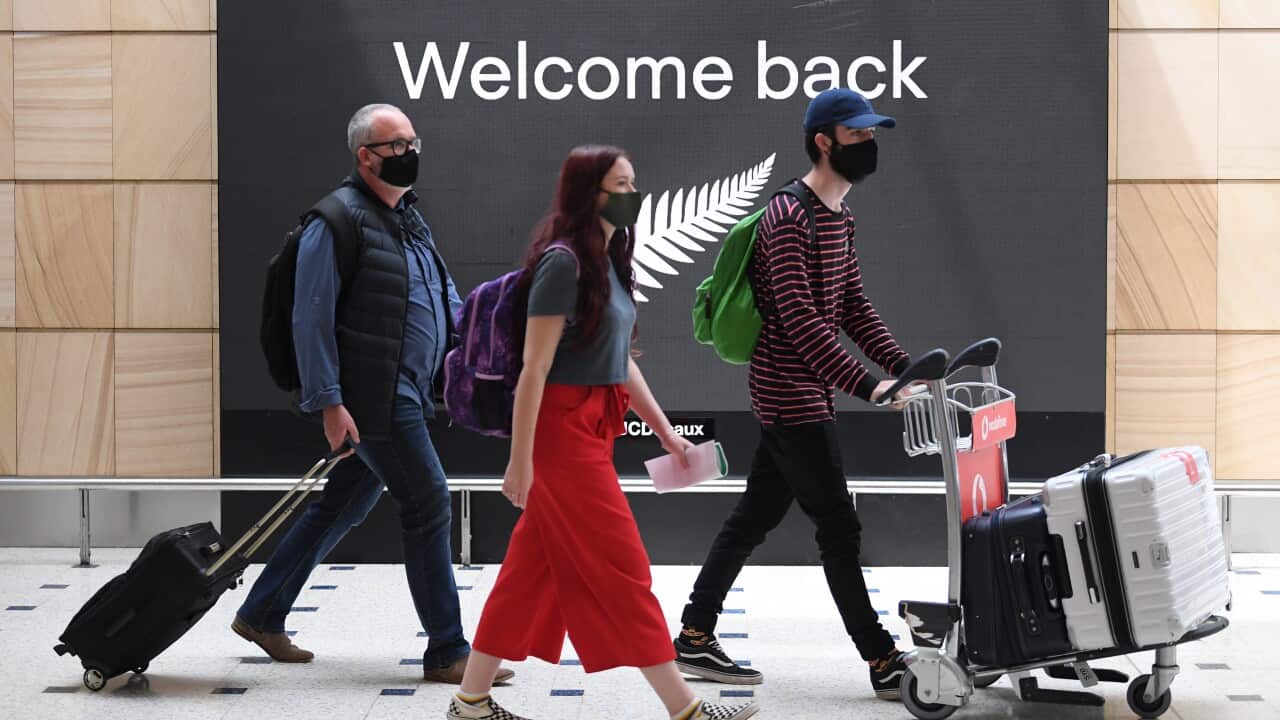 At least 90 New Zealand travellers have flown to Victoria, Western Australia and Tasmania after arriving in Sydney, despite only NSW and the Northern Territory agreeing to the trans-Tasman bubble.

There was widespread confusion on Sunday as Premier Daniel Andrews revealed previous estimates of
17 New Zealanders arriving in Victoria
had
jumped to 55
as state and federal leaders accused each other of responsibility for the bungle.

Some have also arrived in Hobart, Adelaide and Perth, where they will be required to undergo 14 days of hotel quarantine.

Addressing reporters on Monday, Mr Andrews said the number had since grown to 65 as the government "accepted the fact we are in this bubble, whether we like it or not".

Home Affairs secretary Mike Pezzullo, the person responsible for managing international arrivals to Australia, told Senate Estimates on Monday that no restrictions on internal travel exist once New Zealand travellers have been cleared to enter the country.

"Once they've cleared all those formalities - customs, immigration, quarantine, biosecurity, or any other federally enforced obligation - you are subject to the ordinary laws of Australia's federation," he said.

Secretary of the Department of Home Affairs Mike Pezzullo speaks during a Senate inquiry at Parliament House in Canberra. Source: AAP

He also said he believed some of the Kiwi arrivals have since travelled to Queensland, adding to the growing list of states who did not sign up to the travel bubble, but have received the incoming New Zealanders.

Mr Andrews has maintained the federal government failed to alert Victoria the New Zealanders were entitled to travel to other parts of the country after flying into Sydney or Darwin.

"Let's make the best of this and provide all the information that we can to people. That is the only option that we have got," Mr Andrews told reporters on Monday.

He said more New Zealanders would likely be on board 17 flights from Sydney arriving on Monday, but they would not be required to quarantine.

"I'm not going to be quarantining people that came from a low-virus community and we just have to make the best of this," Mr Andrews said.

"If people turn up today on any one of those 17 flights, we will provide them with advice and support and we will make sure that they comply with all the rules as they relate to Victorians."

Victoria's
Department of Health website
was updated on Sunday night to say New Zealanders arriving in NSW are able to travel to Victoria without quarantining.

"We will provide the best health advice, because, despite the fact that we didn't want to be in the bubble, it seems like the buble applies to every part of our country, not just those that said yes," Mr Andrews said.

Western Australia and Tasmania authorities also revealed on Sunday they too had received 23 and five New Zealander travellers respectively. The travellers will be forced to undergo a 14-day mandatory quarantine period, taking up valuable spots for Australians returning from overseas.

WA Premier Mark McGowan on Monday pleaded with the federal government to slow down on allowing international travellers, saying his state did not sign up to the bubble.

He confirmed those New Zealanders who entered WA had a legitimate reason, and that some had applied under the G2G entry system. But he said the state was given no advance notice of their arrival.

Western Australia will reopen its borders to all states and territories from 14 November, but some restrictions will remain for people from NSW and Victoria. Source: AAP

"Western Australia did not sign up to it, and did not agree with the one-way bubble put in place by the federal government," Mr McGowan told reporters.

"i'm asking the federal government to take an extra cautious approach to this, to slow down. A rush approach is not in Australia's interests."

But the federal government, which is responsible for international borders, has repeatedly stressed the program is working as it should, with the arriving travellers able to move through the country subject to state's quarantine restrictions like any other Australian citizen.

Appearing on ABC News on Monday morning, Deputy Prime Minister Michael McCormack said state and territory premiers "have the jurisdictional responsibilities for their own state borders".

"Bottom line is, they are healthy New Zealanders," he said.

Unlike Tasmania and Western Australia, Victoria has not closed its border meaning people are free to enter the state from other Australian regions without quarantining.

"The Victorian government was present when it was discussed, they were made aware that this was going to occur, they raised no objections in the meetings," he said.

In response to Mr Tudge's statement, Professor Sutton said he had attended the meeting in question but was not present for the trans-Tasman bubble discussion.

"Whatever happened there, I can't change it. None of us can change that," Mr Andrews said as he lashed the federal government.

"But I do not think it is unreasonable for us to be concerned if a whole bunch of people from another country turn up in Melbourne when we were of the view that we were not part of that arrangement."

In a statement late on Sunday, a Victorian health department spokesperson said all travellers from New Zealand had been contacted and informed of COVID-19 restrictions across the state. Three of the travellers never entered Victoria, while a fourth returned to NSW that day, they said.

Deputy federal opposition leader Richard Marles, appearing on ABC News on Monday, also said it should have been the responsibility of Australian Border Force (ABF) officers to restrict the incoming international travellers to participating jurisdictions.

"The Federal Government when times get tough, just wash their hands of any responsibility. They've got a responsibility in this respect and they should be taking it," he said.

With another flight set to arrive from New Zealand on Monday, Mr Marles said the federal government needed to explain how they will ensure further travellers are not leaving NSW.

"It beggars belief that once again, the federal government seeks to avoid responsibility in this manner."

The
one-way trans-Tasman bubble allows people to travel from New Zealand to NSW and the Northern Territory
without undergoing a 14-day quarantine. Other Australian states are expected to sign up to the plan in the coming months.

Australians are currently unable to travel to New Zealand under the same conditions.