The unvaccinated Djokovic had his visa sensationally cancelled by the federal government last week. 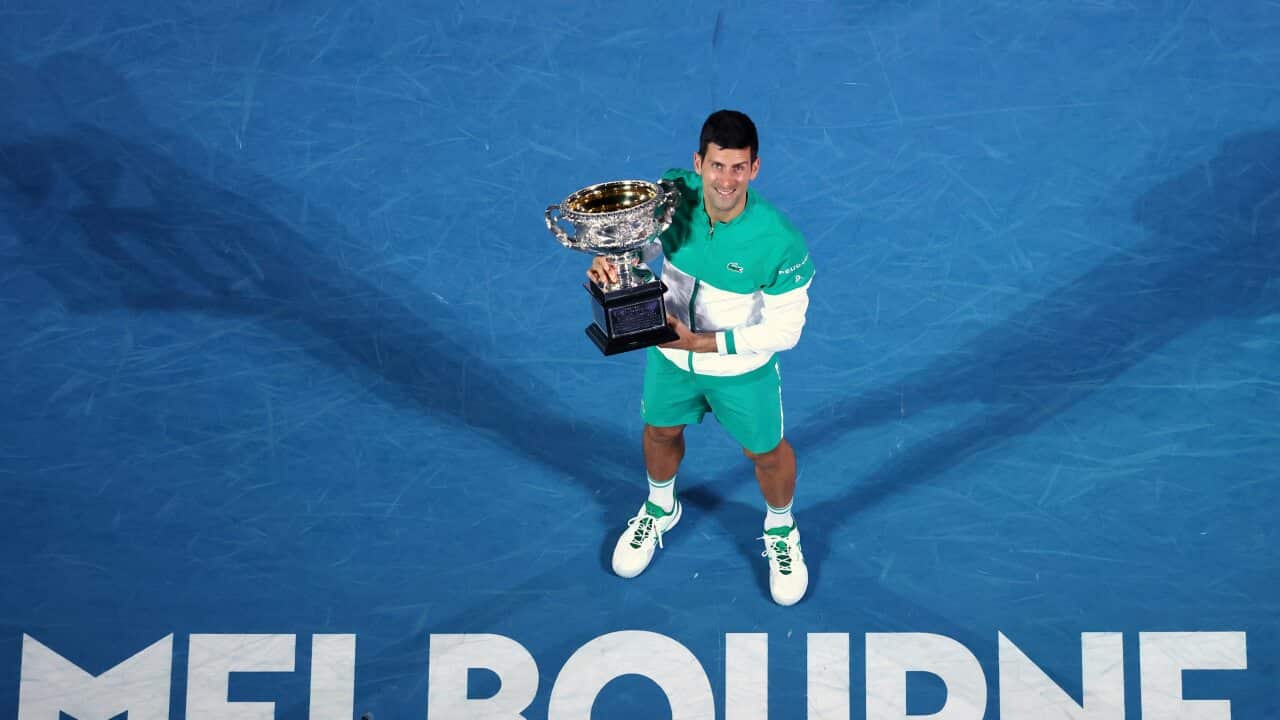 Novak Djokovic has been given the all-clear to leave immigration detention after the Federal Circuit Court overruled a decision to terminate his visa, however he faces the prospect of another cancellation and a three-year ban from entering Australia.

The men’s tennis world number one, who is unvaccinated against COVID-19, had his visa sensationally cancelled by the federal government last Thursday after flying into Melbourne for failing “to provide appropriate evidence to meet the entry requirements to Australia”.

He had been kept in immigration detention while awaiting Monday’s court hearing, which had garnered significant international attention and controversy.

Advertisement
After an agreement was reached by Djokovic's lawyers and those for Home Affairs Minister Karen Andrews, Judge Anthony Kelly on Monday afternoon ordered the decision to cancel the Serbian's visa be quashed and he be "immediately released" from detention.

Lawyers for the government conceded they did not give Djokovic enough time in the early hours of last Thursday morning to respond to a notice of intention to cancel his visa and speak to his team.

But the lawyer acting on behalf of the government, Christopher Tran, told the court Immigration Minister Alex Hawke could now consider whether to exercise ministerial intervention and re-cancel the visa.

Judge Kelly said that if the 34-year-old Serbian's visa is cancelled by ministerial discretion, he won't be able to enter Australia for three years.

"The stakes have risen, rather than receded," he said.

Late on Monday, a spokesman for the minister said: "Following today’s Federal Circuit and Family Court determination on a procedural ground, it remains within Immigration Minister Hawke’s discretion to consider cancelling Mr Djokovic’s visa under his personal power of cancellation within ... the Migration Act.

"The Minister is currently considering the matter and the process remains ongoing."

'What more could this man have done?’

There were farcical scenes amid opening arguments during Monday's online-only hearing, with the official livestream crashing on and off as proceedings stopped and restarted multiple times.

The hearing also began before technical issues were fixed, meaning onlookers and the significant contingent of international media were unable to listen.

According to court documents released on Saturday, Djokovic contracted COVID-19 on 16 December.

His lawyers argued on Monday this meant he met the criteria for a vaccine exemption, that he was denied procedural fairness during the decision to revoke his visa, and that he had declared before his flight to Australia he had a “medical contraindication”, which refers to specific medical reasons for not using a particular treatment.

They also said Djokovic received an exemption from Tennis Australia and correspondence from the Department of Home Affairs that he understood to mean he met the requirements for quarantine-free travel to Australia.

After hearing Djokovic’s lawyers’ arguments on Monday, Judge Kelly questioned what more he could have done to enter Australia.

"A professor and an eminently qualified physician have produced and provided to the applicant a medical exemption. Further to that, that medical exemption and the basis on which it was given, was separately given by a further independent expert specialist panel established by the Victorian state government, Judge Kelly said.

"What more could this man have done?"

Djokovic lawyer Nick Wood SC also said the Serbian was "utterly confused" by the situation when questioned by authorities at Melbourne Airport last week, as he thought he had done everything asked of him.

Novak Djokovic at the 2020 Australian Open at Melbourne Park on February 2, 2020. Source: AAP

In Saturday's submissions to the court, government lawyers said Djokovic was wrong to claim that previous COVID-19 infection was grounds for an exemption.

They said the medical advice was clear that past infection is not a contraindication for infection and instead a person can defer vaccination for six months after acute illness.

"There is no suggestion that the applicant had 'acute major medical illness' in December 2021," the documents said. "All he has said is that he tested positive for COVID-19. That is not the same."

Government lawyers also argued Djokovic's unvaccinated status could be a threat to the health and safety of people in Australia.

Camera crews surround a van as it leaves the Park Hotel on Monday 10 January 2022 Source: AAP

Earlier, Judge Kelly had allowed Djokovic to leave his detention facility - the Park Hotel in the inner-Melbourne suburb of Carlton - for a confidential location specified by his solicitors and "remain there until the conclusion of each hearing".

After his visa was cancelled last Thursday, Djokovic was taken to the Park Hotel, an "alternative place of detention" housing dozens of asylum seekers.

Crowds of people have been protesting outside the Park Hotel to draw attention to the men inside, some of whom have been in Australia's immigration system for nearly a decade and have not been allowed to leave detention centres during legal battles.

A fire has broken out at the facility in recent weeks and detainees
have reported being given meals with maggots and mould to eat
.

It's also been the site of a COVID-19 outbreak, where half of the detainees and around 20 staff became infected.

The latest twist in the Djokovic saga means he is a step closer to defending his Australian Open crown and shooting for a record 21st grand slam singles title.