NSW budget deficit more than triples to $11.3 billion as treasurer hails 'once in a generation reform'

Treasurer Matt Kean has defended the cost of the big reform package outlined in the state budget, saying it is a "once in a generation reform budget for the people of NSW". 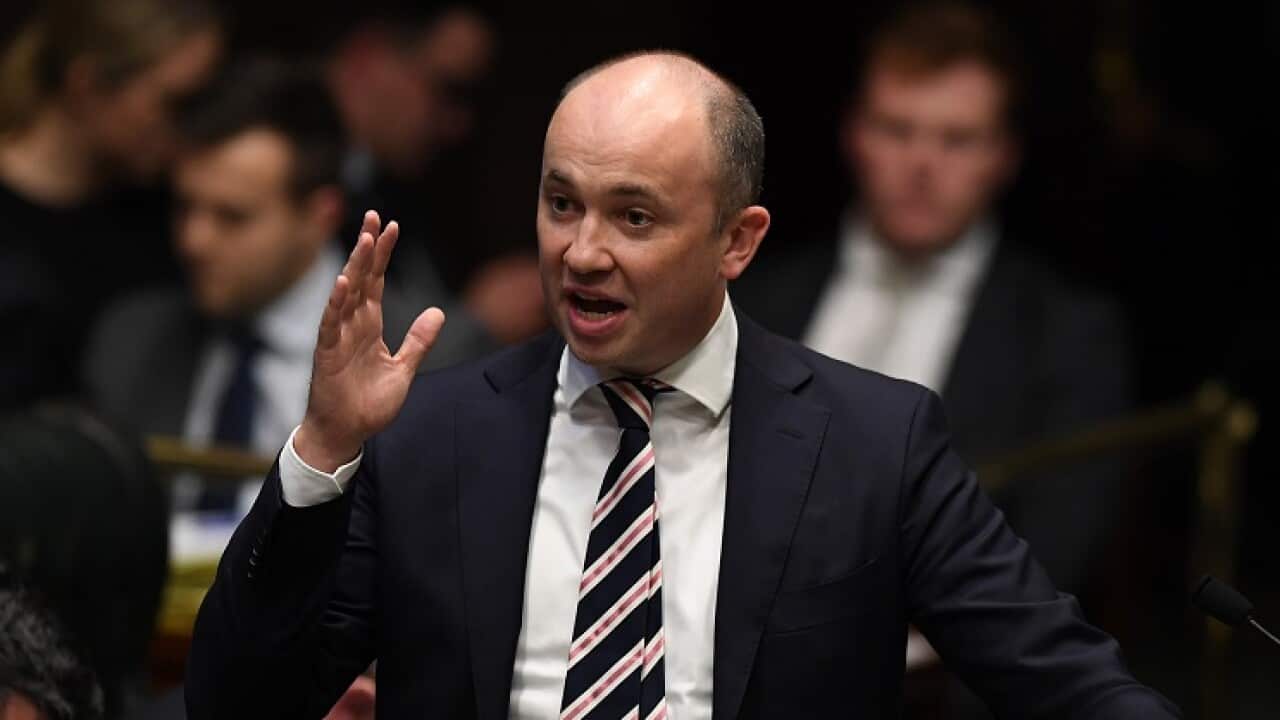 The projected deficit in the NSW budget has more than tripled $11.3 billion as Treasurer Matt Kean outlined a large package of reforms covering the areas of childcare, health and stamp duty.

Handing down his first budget as treasurer, Matt Kean, said the big policy spending items are about planning for the next decade.

"(The) budget is a 10-year blueprint for prosperity," Mr Kean said.
Advertisement
READ MORE
'Gamechanger': NSW to add free extra year onto early education, with Victoria expected to follow
He said the government estimates a $16.6 billion budget deficit for 2021-22, improving to $11.3 billion in 2022-23 "as we navigate the after-effects of COVID-19 and the floods".

It far exceeds the $3.6 billion deficit forecast for 2022-23 in December's half-yearly review.

"This budget is about reform. Reform to give our children the best start to life reform to make owning your own home easier to achieve and reform to break the barriers to women's opportunity in this state," he told NSW parliament on Tuesday.

The budget is the final one before the March 2023 state election.

Now premier, Mr Perrottet said Tuesday's budget continued the work of the coalition and the three premiers who had preceded him since 2011.

"For more than a decade we have delivered on our vision ... with this budget the NSW government sets out a transformational roadmap for the decade ahead, delivering not just for our people today, but for generations to come," Mr Perrottet said.
READ MORE
Australians should expect more interest rate rises but risk of recession low, RBA governor says
He pledged to put families first after he became premier, and the budget contains billions in spending for families.

"This budget is about reform, reform to support families and build a brighter future for everyone," Mr Kean said on Tuesday as he delivered his first budget.

This time last year it was then-treasurer Dominic Perrottet who announced NSW was "back", shortly before the state was again plunged into lockdown by the outbreak of the Delta variant of COVID-19.

Both men have sought to put their stamp on the state in the first budget in their respective roles, with the premier enacting the first stage of a long-held plan to abolish stamp duty and the treasurer implementing the first policies recommended by the expert panel of women assembled in February to advise on the budget.

The centrepiece from their recommendations is a plan to spend up to $5 billion during the next decade to address "childcare deserts" and help women return to work after birth.

Mr Kean said the budget was "investing in the aspirations of women", and increasing women's workforce participation to the same rate as men's would make the economy eight per cent larger by 2060.

"This is an economic opportunity we cannot ignore," Mr Kean said.
A fund of $716 million has been set aside for Indigenous community programs with the goal of "empowering" First Nations people, Mr Kean said.

"We will fund programs designed in partnership with First Nations communities to support their children and young people to improve their health and wellbeing; and expand Aboriginal Child and Family Centres."

As well as spending on childcare, parental leave will be expanded for public sector workers, subsidies will be available for pre-school fees, the will be a $150 back-to-school voucher per child and other cost of living measures such as toll rebates, free solar systems or energy efficient appliance upgrades are expected to bring relief to families.

The NSW government has announced a record $33 billion investment in the state's health system, which the premier says will deliver world-class health care.

Some $30 billion in recurrent funding will be topped up with $2.8 billion in promised capital works as the government pledges to build and redevelop NSW hospitals.

Key funding announcements include $1.76 billion for NSW Ambulance to recruit 2128 new staff, $2.9 billion for mental health services, including $143 million for suicide prevention, and $899 to address the continued costs associated with COVID-19.

"The NSW government is committed to ensuring everyone across the state continues to receive first-class care from our biggest-ever workforce in fantastic healthcare facilities throughout the state," Mr Perrottet said on Tuesday.

Despite the pandemic and recent natural disasters, the state has retained a projected return to surplus in 2024/25.

The surplus would be achieved through budget improvement measures over the next four years, including increases in taxes on foreign investors and gambling, Mr Kean said.

Revenue is also expected to increase on the back of projected rises in GST revenue, mineral royalties, payroll and land taxes.
READ MORE
'Challenges remain': Calls for national approach to energy crisis as NSW minister granted emergency powers
Temporary payroll tax relief for businesses, in place throughout the coronavirus pandemic, will end and return to 5.45 per cent, but businesses in "future industries" will be offered grants and payroll tax exemptions through the Future Economy Fund until July 2027.

Economic growth of 4.25 per cent is projected for the next financial year.

The projected deficit for 2022/23 has blown out to $11.3 billion however, up from $3.6 billion projected at the midyear review in December, which was shortly followed by the Omicron outbreak.