The NSW Opposition leader Chris Minns says the premier's review of John Barilaro's New York appointment is a farce, adding that the former National's leader was picked for a role he created when he was the state trade minister. 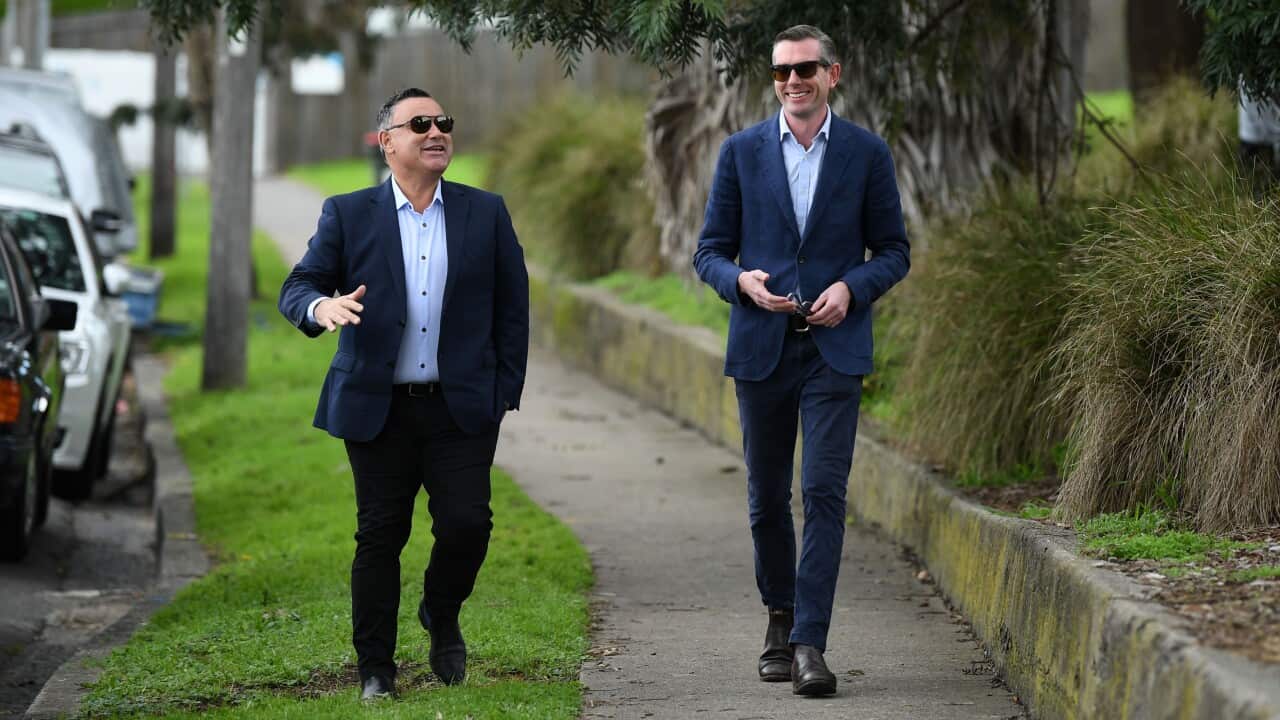 NSW Premier Dominic Perrottet's appointment of former NSW Deputy Premier John Barilaro to a plum job in New York is being questioned by the state Opposition. The two are pictured together in 2020. Source: AAP / JOEL CARRETT/AAPIMAGE

NSW Opposition Leader Chris Minns has labelled an internal review of the process that led to former deputy premier John Barilaro being appointed to a
coveted taxpayer-funded posting in New York City
a 'farce'.

NSW Premier Dominic Perrottet on Thursday morning announced he had initiated his own review of the appointment process.

Mr Perrottet said the results of his own review, which would be conducted alongside an upper house inquiry, would be made public.

Advertisement
"I've directed the secretary of the Department of Premier and Cabinet [Michael Coutts-Trotter] to conduct a review," the premier told reporters on Thursday.
READ MORE
John Barilaro temporarily blocked from $500,000-a-year taxpayer-funded job in the US
"He will provide that report to me ... I will review it, and I will make it public."

In response, Mr Minns said: "This is just, I think, a farce at this point."

"We're expected to believe in global search took place, not just the eight million people that live in this state, but everyone around the entire world, to represent the economic and trade interests of people in NSW," he said.

"And the bloke they picked was the guy they sat next to for the past 12 years? It just happened to be the leader of the National Party?" Mr Minns said.

The government announced on Friday that Mr Barilaro had been appointed the state's senior trade and investment commissioner to the Americas, a role the ex-Nationals leader created while trade minister.

The premier and Investment Minister Stuart Ayres on Wednesday insisted the appointment had occurred through an "independent process".

Both singled out Amy Brown, the former secretary of the premier's department and now the CEO of Investment NSW, as the ultimate decision-maker.
Ms Brown reported to Mr Barilaro when he was the minister responsible for the Department of Enterprise, Investment and Trade.

The premier said the initial recruitment phase was derailed when Ms Brown said no candidate had been found.

A second appointment process then began, which led to Ms Brown choosing Mr Barilaro for the role, Mr Perrottet said.

Mr Ayres said during Question Time on Wednesday that the role was publicly advertised and Mr Barilaro applied as a private citizen.

"His application was not solicited by me as the minister or by Investment NSW," Mr Ayres said.
READ MORE
NSW parliament has seen a string of high-profile resignations. What happens now?
He told the premier and Deputy Premier Paul Toole of the secretary's recommendation to hire Mr Barilaro on 30 April.

Mr Ayres said he did not intervene in Mr Barilaro's appointment because it occurred after an "independent, open, merit-based recruitment process" that recommended a "qualified, suitable candidate".

"I reject in the strongest possible terms that the appointment of Mr Barilaro, as quoted in some media outlets, was a 'captain's pick' or a unilateral decision by me or any other minister."

He said the decision was not required to go to cabinet.

Labor upper house leader Penny Sharpe said Mr Perrottet and Mr Ayres recommended the approval and bypassed the cabinet to avoid feedback from their cabinet colleagues.
A motion passed the upper house on Wednesday temporarily blocking Mr Barilaro from taking the role until a parliamentary inquiry scrutinises the process.

Documents reveal four people were considered for the New York-based role during the recruitment process, and two were shortlisted.

One applicant, Jenny West, was told in August by then-premier Gladys Berejiklian she had the job, The Guardian reported.

She was later told the offer had been rescinded and was paid a substantial settlement, it said.

He denied Mr Barilaro's appointment was "a captain's pick".

"These were public service decisions through an independent process."

The premier told ABC radio on Wednesday he would take action if there "were not good reasons" behind the decision to appoint Mr Barilaro.
SHARE
4 min read
Published 23 June 2022 at 12:06pm, updated 23 June 2022 at 5:35pm
Source: AAP, SBS
Tags
Australia

John Barilaro's withdrawal from New York trade job shows 'we are doing democracy the way it should be', David Elliott says

John Barilaro temporarily blocked from $500,000-a-year taxpayer-funded job in the US

Sarah lost her sons to the Philippines' war on drugs. Will she ever see justice?