NSW Nationals leader John Barilaro says he would like to be treasurer if the opportunity presented itself. 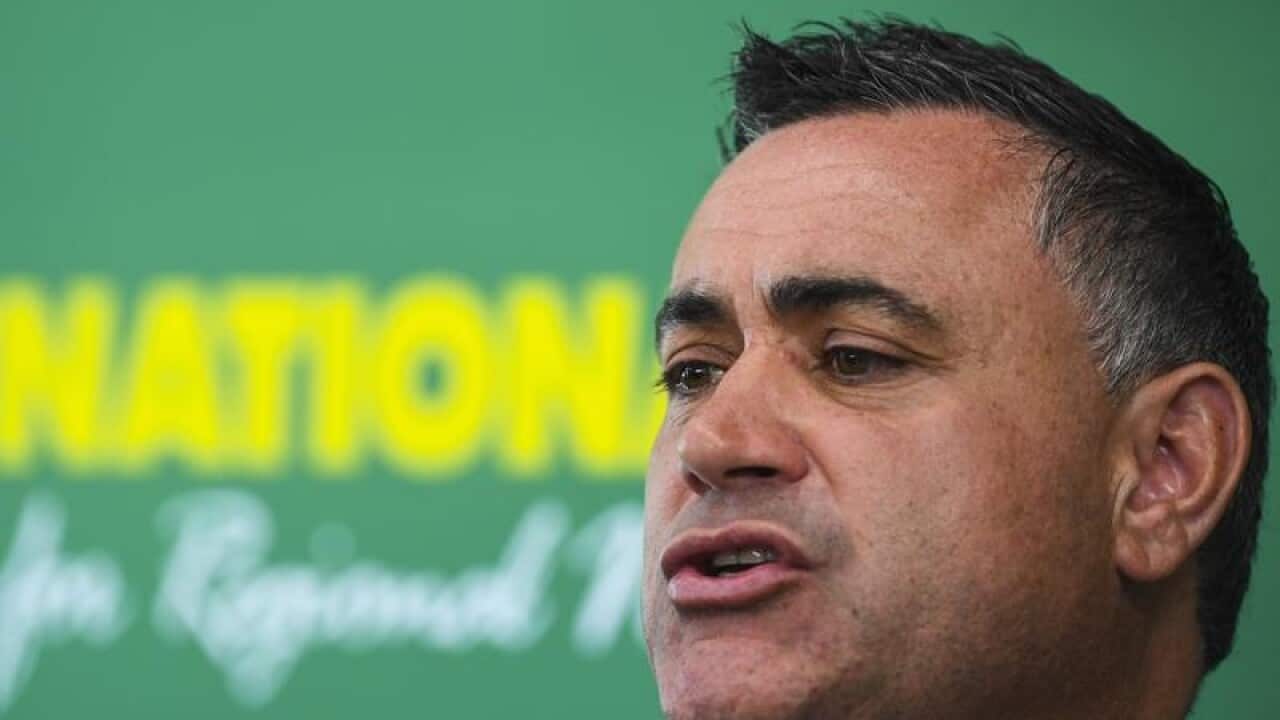 NSW Deputy Premier John Barilaro says he would be a good choice to be state treasurer. (AAP)

The NSW premier has happily admitted it's apt for her deputy to be nicknamed "Pork Barrel-aro" just hours after the Nationals leader went public with his desire to one day be treasurer.

John Barilaro says if he were handed the keys to the state coffers he'd live up to the moniker "Pork Barrel-aro" by taking it to another level in the regions.

Mr Barilaro believes the coalition has been well served by a host of Liberal treasurers but he'd jump at the chance to manage the state's books.

Advertisement
"If I was offered the Treasury of course I would (take it)," Mr Barilaro told AAP, adding he'd discussed the job with Premier Gladys Berejiklian.

"I'd love to see the day that a National Party member was treasurer. There's nothing wrong with that."

Ms Berejiklian on Friday was asked if it was a good idea for her deputy to be referring to himself as "Pork Barrel-aro".

"He is, he is," she told reporters enthusiastically.

"He always comes to the treasurer and I asking for money and most occasions he gets it.

"We're in a strong position and I'm incredibly proud of how much we're investing - not just in our cities but in our regions."

Mr Barilaro, who ran a family business that manufactured energy efficient windows and doors before he entered politics, insists he's up to being treasurer.

He believes the skills required to run a successful small business and manage a multi-billion dollar state economy are much the same.

"I look at portfolios that I'm really good at, that I'm strong at, and Treasury would be a portfolio that I believe I have the skillsets for."

The Queanbeyan MP said a Nationals treasurer would transform how money was distributed to the regions.

"People already call me Pork Barrel-aro ... I'd probably take it to another level," he said during a trip to the state's north.

"The focus on regional NSW would change completely."

Treasurer Dominic Perrottet has tried to make light of Mr Barilaro eyeing off his job.

"I've been travelling the regions and I've always wanted to be leader of the National Party - we'll see how that goes," Mr Perrottet quipped to reporters on Friday.

On a more serious note, he added: "We all serve in our ministerial roles at the pleasure of the premier."

Mr Barilaro, who's said he's unlikely to contest the 2023 election, acknowledges the coalition needs to be returned on March 23 before it starts "carving up the spoils of victory".

Liberals Andrew Constance, Mike Baird and Ms Berejiklian were most recently responsible for the state's finances before Dominic Perrottet was given the treasurer's job in early 2017.