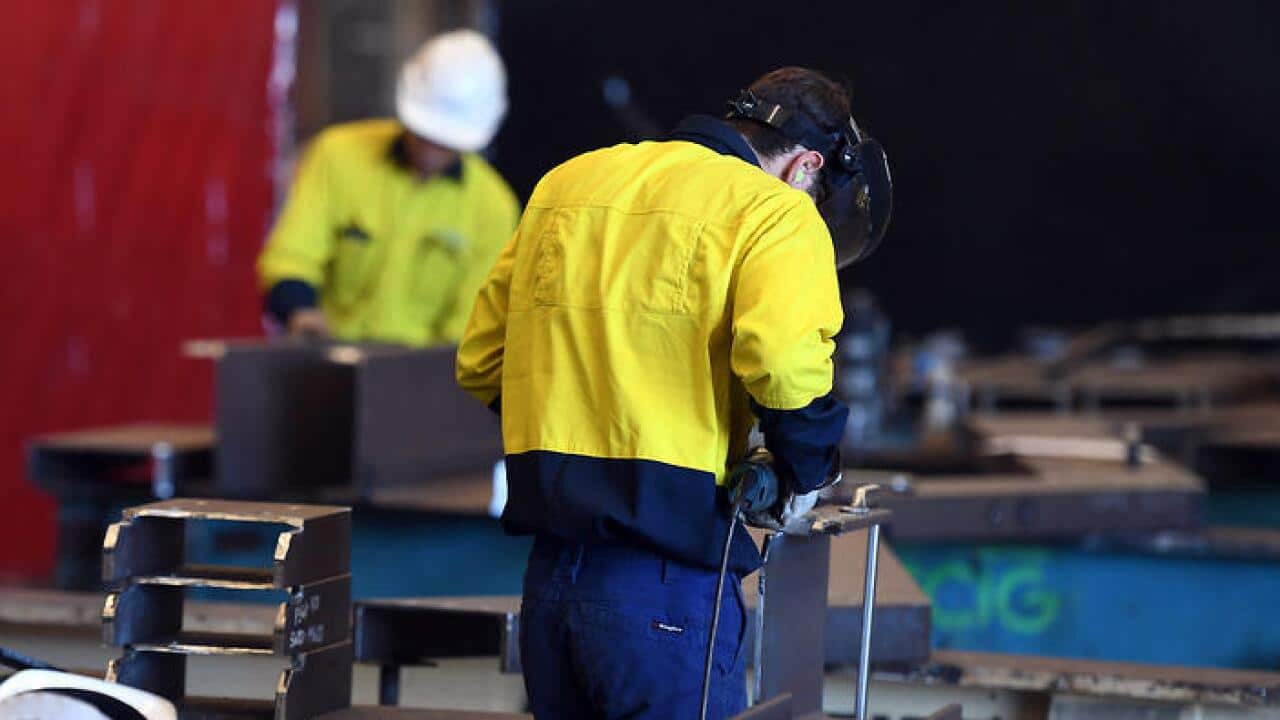 Workers are seen on the production floor at the Civmec Construction and Engineering facility in Perth, Friday, March 10, 2017. Source: AAP

Replacing the
Temporary Work
visa to a
Temporary Skill Shortage
visa in March 2018 will unlikely create many more opportunities for local workers, says Dr Wright, who specialises in labour market regulation and immigration at the University of Sydney Business School.

"I agree [the change] could lead to a reduction in the number of people applying for these visas," he tells SBS World News.

"But I'm not so sure whether the changes will lead to a large growth and opportunities for local workers."

Institute president Dr Bob Birrell, the author of the report – 'The Coalition's 457 Visa Reset: Tougher than you think' – believes replacing the Temporary Work (Skilled) 457 visa, which was granted to 45,395 people in 2015-16, with the Temporary Skill Shortage (TSS) visa is "a gain for domestic job seekers".

"These migrants are adding massive stresses to the Australian labour market, not only in the professional occupations focused on above, but also in the lower skilled occupations, especially entry level jobs in the construction, hospitality, retail and other service occupations."

Australia currently has an unemployment rate of
5.8 percent
, up from 5.6 per cent in June.

When Prime Minister Malcolm Turnbull announced the change in April, he said, "Australian workers must have priority for Australian jobs, so we are abolishing the 457 visa.

Under the TSS visa, the number of eligible occupations has reduced from 651 to 435, and while some occupations are given four-year contracts, others have been restricted to two years.

These restrictions cut the pathway for TSS visa holders to a permanent entry employer sponsored (ENS) visa, and he estimates the number of ENS visas – at 48,250 for the year 2015-16 – will reduce to less than one third.

The main eligibility restriction, Dr Birrell says, is those in the two-year contract stream can no longer be sponsored by their employer for permanent entry visas.

Additionally migrants on two-year and four-year TSS visas must have two years of relevant experience.

Dr Birrell says the work experience requirement will be a "game changer" because more than half the 457 visas that are granted to onshore applicants – and the majority of those are former overseas students.

Additionally, employers will likely be deterred by being subject to additional labour market testing and training obligations.

There are currently 100,000 people on 457 visas. That's less than one per cent of the total
12 million
who make up Australia's labour force - a figure Dr Wright says is not a "game changer" and describes as too "numerically insignificant" to deprive locals of jobs.

"Any claim that a major reduction in workers on temporary visas would have a significant impact upon the Australian labour market is a bit far-fetched."

The
137,376 Working Holiday Maker
visa holders in Australia and
401,423 Student
visa holders occupy a "much more numerically significant proportion" of the job market industries such as hospitality, retail and horticulture.

In contrast, temporary visas are "relatively evenly used across the labour market," occupying no more than 10 per cent of any industry "in any given year."

Dr Wright says if the government was "serious about improving job opportunities for locals, so to speak," then it should adjust its industrial and labour market policies.

He suggests changes such as strengthening requirements on employers to train their workers.

"And improve the quality of jobs to make people more inclined to go into jobs that employers have difficulty filling."