Public hospital nurses have rallied outside NSW parliament after walking off the job over a long-running dispute over nurse-to-patient ratios and pay. 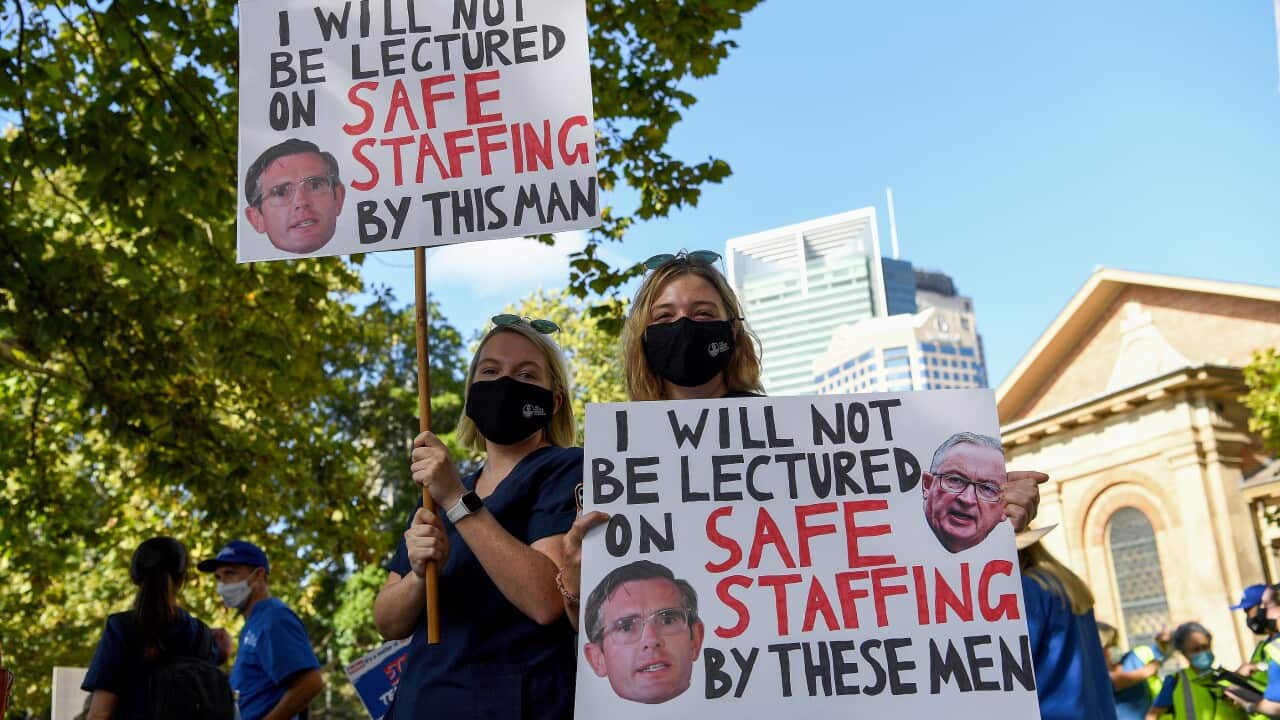 Thousands of New South Wales public hospital nurses have walked off the job in protest, saying they are stretched too thin to give patients the care they deserve, especially in a pandemic.

Staff at around 150 public hospitals are participating in staggered strikes across the state, with a skeleton staff working to ensure patient safety.

Nurses want a ratio of one nurse to every four patients on every shift and a pay increase above the government's prescribed public sector offer of 2.5 per cent.

Advertisement
Protesters rallied outside NSW Parliament House on Tuesday, taking their message to MPs who are returning for the first sitting day of the year.

The rally was one of about 30 around the state.

Nurses, midwives and supporters - many of whom said they would have preferred to be at work - gathered in Queen's Square, with the crowd spilling over into nearby Hyde Park before marching up Macquarie Street to Parliament House just after 10am.

The strike is in defiance of an 11th hour ruling by the state's Industrial Relations Commission which, on Monday, ordered the union to refrain from industrial action.

Health Minister Brad Hazzard met with the union on Monday in an attempt to avert the action and said he's disappointed the strike is going ahead.

"It's unfortunate ... there's been all sorts of efforts to try and work our way through their principal issues," he told Sydney radio 2GB on Tuesday.

NSW Nurses and Midwives Association president O'Bray Smith told members on Tuesday the union was offered nothing at the meeting.

"Those 'crisis talks' were merely a tickbox so they could go to the IRC and the media and say 'oh, we tried'."

Ms Smith said Mr Hazzard and health bureaucrats spent the meeting "mansplain(ing) about life in health", saying it was striking that "there are so many politicians ... making decisions that profoundly impact our working lives, yet they have no background in health".

He said the thousands of health workers who turned out to protest and the "tens of thousands of nurses ... back looking after the patients trying to keep them alive" demonstrated the workforce is ready to fight and "stay fighting until we win".

Nurse-to-patient ratios are the main point of concern.

Mr Hazzard agrees there needs to be enough nurses to ensure patients are safely cared for but said the union's demands would cost around $1 billion.

"I still need to be able to manage taxpayers' dollars and make sure it works," he said.

Mr Perrottet said the patient ratios the union want are not effective, and the system had not worked well in other states.

Some hospital workers, like those at Byron Central Hospital, support the strike but won't leave their nurses' stations over concerns they already do not have enough staff to provide the required care.

Liz McCall, a senior nurse at Byron Central said many senior nurses had resigned or retired early during the COVID-19 pandemic because of their workloads, leaving a major gap in nursing experience.