One in three women worldwide is a victim of physical or sexual violence, new report shows

Nearly one in three women worldwide is subjected to physical or sexual violence during her lifetime, pervasive criminal behaviour that has increased during the pandemic, the World Health Organization says. 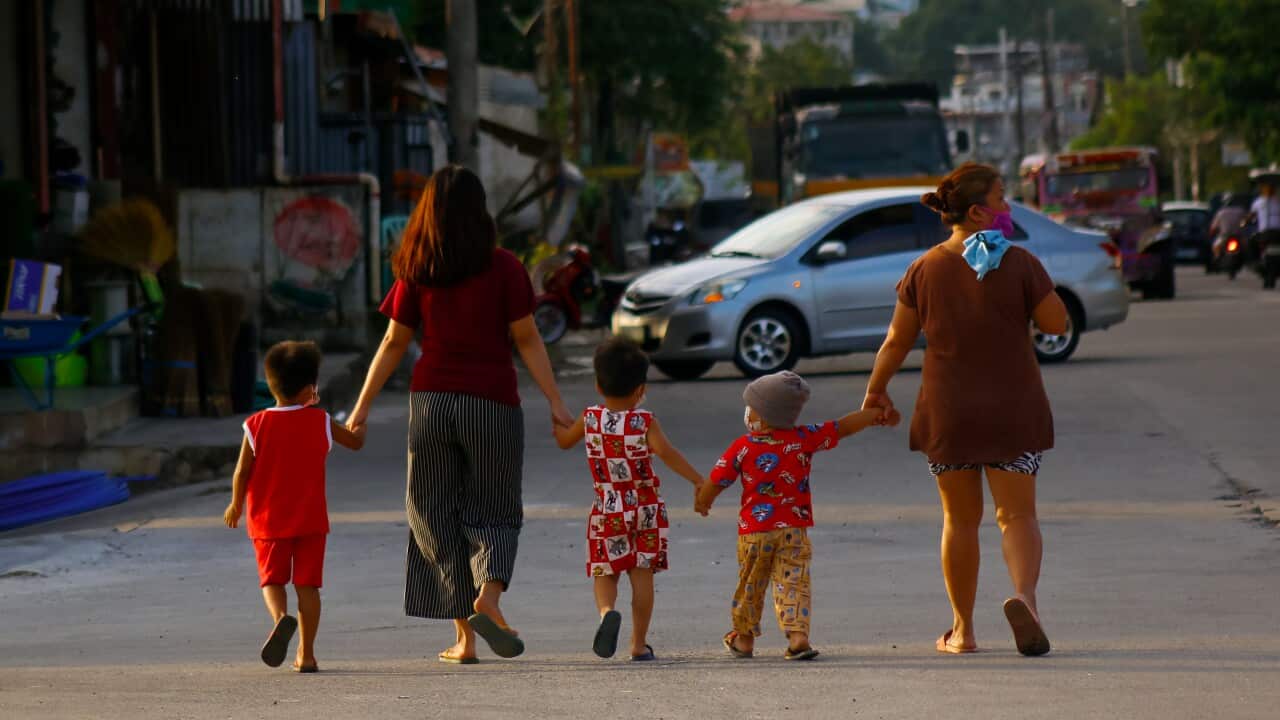 A file photo of women and children walking down a street in Rizal province, Philippines on 16 January, 2021. Source: Getty

One in three women have already suffered physical violence or sexual abuse, the World Health Organization said on Tuesday, warning that the coronavirus pandemic was deepening the problem.

In a report
, the UN health agency found that around 30 percent of all women and girls over the age of 15 - around 736 million people - have already been victims of such violence throughout their lifetimes, mainly at the hands of intimate partners.

"Violence against women is endemic in every country and culture, causing harm to millions of women and their families," WHO chief Tedros Adhanom Ghebreyesus said in a statement, adding that the problem "has been exacerbated by the COVID-19 pandemic".

Advertisement
Dr Claudia Garcia-Moreno, who co-authored the report, acknowledged that experts were still waiting for the full data showing the impact of the pandemic.

But the health crisis has clearly had a negative impact, she said.

"We know that the situation for many women may have gotten worse," she told AFP, pointing in particular to the some 641 million women and girls over 15 who have faced violence from an intimate partner.

"Women who were already in an abusive situation were trapped in those situations," she said. "All of a sudden they were more isolated and in constant touch with an abusive partner."

At the same time, the added financial pressures and stress of having children at home, among other challenges, risked sparking fresh abuse.

"We know that some of the factors that contribute to exacerbating domestic violence in particular are there," Garcia-Moreno said.

It follows a first report on the subject in 2013, but Dr Garcia-Moreno said comparisons were complicated due to a shift in methodology and access to far more data for the second report.

What is clear, she said, is that "the rates are unacceptably high and need urgent action".

Abuse by an intimate partner is by far the most common form of violence against women globally, the report said, impacting a full 26 per cent of all women and girls over 15.

Six per cent of women have meanwhile been sexually assaulted by someone other than their husband or partner, the report found.

Significant stigma around this issue meant the true figure was likely much higher, it said.

READ MORE
‘I can’t keep it to myself anymore’: More women disclosing sexual assault in wake of political revelations

One alarming finding was that partner violence often begins very early in life, with almost a quarter of all adolescent 15-19-year-old girls who had been in a relationship subjected to physical or sexual violence by their partner.

“It’s deeply disturbing that this pervasive violence by men against women not only persists unchanged, but is at its worst for young women aged 15-24 who may also be young mothers. And that was the situation before the pandemic stay-at home orders. We know that the multiple impacts of COVID-19 have triggered a 'shadow pandemic' of increased reported violence of all kinds against women and girls,” said UN Women Executive Director Phumzile Mlambo-Ngcuka.

“Every government should be taking strong, proactive steps to address this, and involving women in doing so”, she added.

While levels of violence against women are "unacceptably high everywhere," there are clear regional differences, Dr Garcia-Moreno said.

Poorer countries generally have higher levels than wealthier nations, and the region of Oceania counted the highest rates, with up to 51 per cent of women aged 15-49 having experienced partner violence in their lifetimes, the report showed.

Southern Asia and sub-Saharan Africa also saw particularly high levels of such violence, while southern Europe had the lowest rates, at 16 per cent.

"This is probably a reflection in some part of women's ability to leave abusive relationships, more access to services, more legal protections," Dr Garcia-Moreno said.

Dr Tedros stressed the need for urgent action to address the problem.

"Unlike COVID-19, violence against women cannot be stopped with a vaccine," he said.

Instead, he said, governments and communities need to work to "change harmful attitudes, improve access to opportunities and services for women and girls, and foster healthy and mutually respectful relationships."