Rising sea levels, fires, floods and other natural disasters are leaving people with no choice but to move away from their homes. 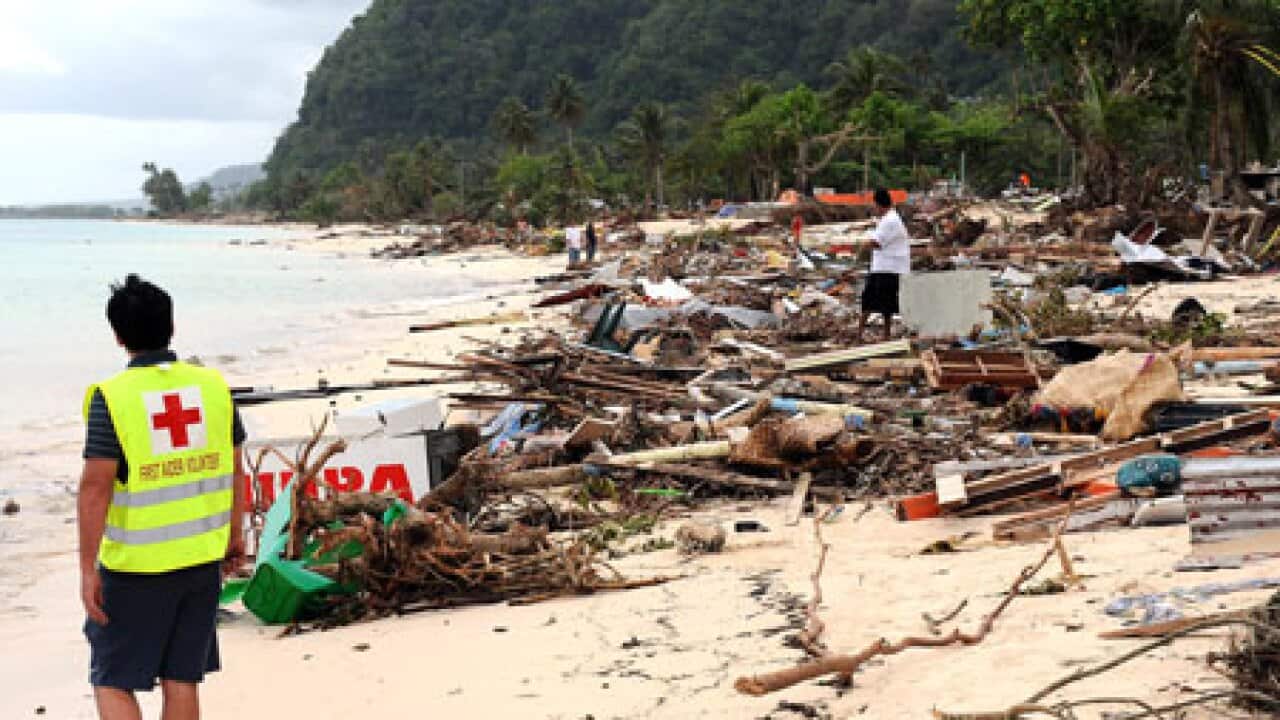 A devastating tsunami in Samoa in 2009 prompted many from traditional coastal communities to make the difficult decision to leave their lands and move inland. Source: Getty

As country leaders debate the key target to reduce greenhouse emissions to net zero by 2050, there's another daunting milestone that date represents.

According to the World Bank, climate change could force around 216 million people across six world regions to relocate by 2050.

But with concerted action now, it estimates the scale of climate migration could be reduced by as much as 80 per cent.

Advertisement
The University of New South Wales' Andrew & Renata Kaldor Centre for International Refugee Law is hosting a conference that started on Tuesday, addressing the questions of global warming displacement.

Centre director Professor Jane McAdam said it was an issue close to home.

"We know already that 80 per cent of disaster-related displacement over the past decade has occurred within the south Asia-Pacific region," she told SBS. "So that's millions and millions of people and last year, for example, there were 31 million people displaced by the impact of a disaster."

According to Professor McAdam, disaster-related movement now makes up 75 per cent of internal displacement compared to the 25 per cent caused by war or conflict.

As climate change exacerbates these pressures, there is the increased potential that more people will need to move to avoid displacement or seek refuge away from their homes.

Some will relocate within their own countries, while others may be displaced further afield.

Jessica Van Son, secretariat of the Asia Pacific Migration Network based at Australian Red Cross, said preventative action needed to be taken to avoid moving people from their homes, which should be a last resort.

"It's about having really inclusive and accessible disaster risk education measures in place that prevent displacement before it occurs, and make sure that communities are included in these responses," she said.

"If displacement can't be prevented it's about making sure that people have the protection and assistance that they need after disaster strikes, and if people are displaced across borders that there are the right legal frameworks to make sure they are looked after and supported."

With no legal definition of a climate refugee, establishing those frameworks, according to Professor McAdam, is a key sticking point, particularly in this region where rising sea levels and more frequent extreme weather events are posing existential threats to Pacific Islanders.

"We don't yet have clear international frameworks that would facilitate movement," she said.

"In some parts of the world, in Africa for example, there are free movement agreements between certain countries, or groups of countries, that means people can move freely but we don't yet have anything like that in the Pacific, other than the trans-Tasman agreement that allows Australians and New Zealanders to move relatively freely."

But no matter the result of the COP26 conference and any targets set, Professor McAdam said people would continue to be forced to relocate from the impacts of climate change and disasters.

"Even if carbon emissions were to stop today, we now know that some level of displacement is going to occur, " she said. "We need to be prepared for that and ensure that people are assisted rather than scrambling in the humanitarian emergency after the displacement."

Experts have previously warned around 42 small states or countries could literally go underwater without action on climate change.

Thursday Island, where the ancestral lands are being washed away by sea level rise from climate change. Source: Shutterstock

Tala Mauala is secretary-general of the Red Cross in Samoa, where it's estimated sea levels have risen four millimetres a year since 1993.

"A lot of our land and families that used to live on coastal areas, because erosion is so quick, so they have lost that part of their livelihoods," Ms Mauala said.

"It's really changed lifestyles. Before you would see a lot of canoes in the sea, people fishing ... even at night, we hardly see people fishing at night."

A devastating tsunami in 2009 prompted many from traditional coastal communities to make the difficult decision to leave their lands and move inland to higher ground.

Others have migrated to New Zealand and Australia through seasonal farmworker programs.

And there are signs international world leaders are taking heed of the humanitarian implications.

The Biden administration - which will be represented at this week's conference - is undertaking a review of what the United States should do to help people displaced by global warming.

New Zealand has announced it will carve off more than $1.2 billion ($1.3 billion NZD) of its foreign aid budget to help vulnerable nations, while the United Nations Human Rights Council has recognised for the first time the right to a clean, healthy and sustainable environment.

It's created a new role - a special rapporteur on the promotion and protection of human rights in the context of climate change.