One year on from the 6 January Capitol riot, the US is still dealing with the fallout

ANALYSIS: Twelve months on from the riot that shocked the world, misinformation, division and concern about the fate of democracy continue to pervade the US. 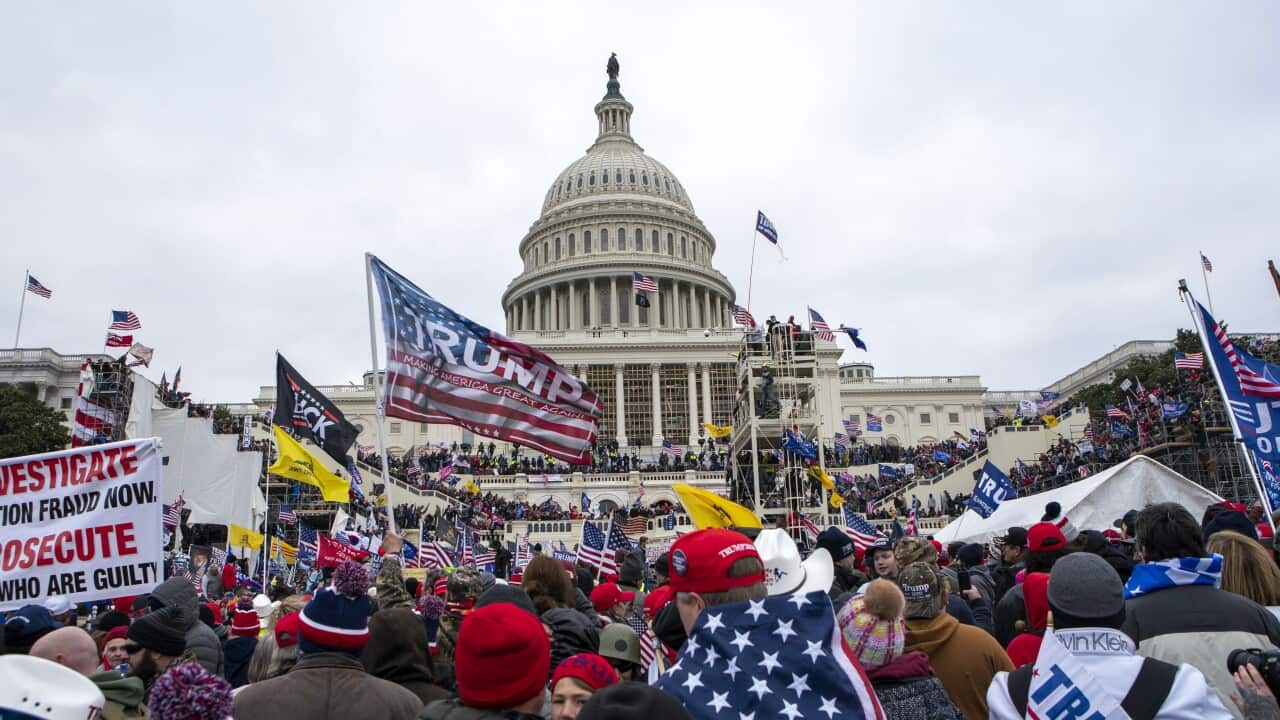 Rioters loyal to Donald Trump during the US Capitol attack in Washington Source: FR159526/AP

The year 2021 will be remembered for an unprecedented event in US history: the 6 January assault on the Capitol by supporters of President Donald Trump in an attempt to prevent the certification of the 2020 election results.

This was not an attack on a building, but on Congress itself. Its members were in session and had to stop their vote, hide under their seats and the building was urgently evacuated in a state of panic.

Five people died during the riot and its immediate aftermath, and hundreds have subsequently been charged with federal crimes.

Advertisement
Since July, the events of 6 January have been under investigation by a bipartisan House Select Committee in charge of investigating “one of the darkest days of our democracy”.

The 'Big Lie' and its consequences

While the Capitol has been the scene of much violence in the past, it has never been attacked on this scale by US citizens emboldened by a president attempting to overturn a legal and legitimate election.

Beyond the question of whether this amounted to an attempted coup, this violent assault was certainly the dramatic culmination of a long process of undermining America’s democratic institutions.

In the preceding weeks, a small circle of Republican lawmakers from the ultra-right Freedom Caucus that includes former Tea Party members, worked with the president and the White House through chief of staff Mark Meadows to try to overturn the results of the 2020 election.

They pressured local elected officials, lobbied the Department of Justice, and flooded the courts with appeals that always lost.

Yet even today, Mr Trump and his allies continue to promote the “Big Lie” that the election was stolen from them, amplifying false allegations and conspiracy theories, with the help of media allies like Fox News and the One America News Network.

In the aftermath of 6 January, it might have been hoped that such an appalling event would unite the country, and that elected officials on all sides would put aside their divisions in the face of such an assault on democracy.

Yet just hours after the riots ended, as Congress reconvened on Capitol Hill, the vast majority of Republican representatives and several senators objected to the certification of the vote.

A man with a QAnon jumper during the 6 January 2021 Capitol riot Source: AP

And even though Republican leaders – Kevin McCarthy in the House and Mitch McConnell in the Senate – spoke of the moral responsibility of MR Trump in the attack on the Capitol, they refused to support the impeachment of the former president and opposed bipartisan commissions to investigate the events.

In the end, only ten Republicans voted to impeach Mr Trump over the events of 6 January, and seven voted to convict.

The role of right-wing media

The reason for this reluctance to hold the former president accountable may be that a large majority of Republican voters seems to have bought into the big lie, a belief now shared by some 65 million Americans that has persisted for more than a year.

An astonishing nine per cent even think that the use of violence is justified. That is potentially 23 million Americans.

These polls also show a correlation between willingness to believe in the most far-fetched theories and news sources such as Fox News and the far-right media.

Outflanked on its right by the small but rising extremist channels Newsmax and the One America News Network, Fox News personalities like Tucker Carlson and their congressional darlings (Paul Gosar, Louie Gohmert and Matt Gaetz) quickly promoted revisionist narratives: the events of 6 January were mostly a peaceful exercise of free speech, and the violence was committed by the radical left or undercover FBI agents who infiltrated the crowd, or, alternatively, it was justified by the desperation of patriots fighting for the survival of the republic and democracy.

Mr Trump, for his part, still gives a clear alternate version of the events of 6 January: “The insurrection took place on November 3, Election Day. January 6 was the Protest!” he wrote in a statement released by his fundraising group in October.

The reality is that massive national electoral fraud is nearly impossible precisely because elections are the responsibility of the states, which means the real issues are at the local level.

Those issues include gerrymandering, which on its own could give Republicans a majority in the house in the 2022 midterm elections.

In the Senate, where the Republicans are already over-represented compared to their real electoral weight, ten races will determine the next majority. In the end, there is the real possibility of a Congress being ruled by a minority.

Trump supporters clash with police and security forces as people try to storm the US Capitol in Washington DC on 6 January, 2021. Source: Getty

Beyond the issues of congressional control, these midterm elections will be important for new laws enacted at the state level under the guise of “election integrity.”

Currently, 19 red states (where Republicans control both the legislature and the governorship) have passed laws making voting more difficult.

In other key states, laws have been or are being passed that many fear would allow legislatures to disregard the results of an election.

All this increases the possibility of a constitutional crisis that would end up in front of the heavily politicised Supreme Court.

The other major issue in 2022 will be the Republican primaries.

Mr Trump has signalled his intent to primary any Republicans who dared to criticise him. This includes those who voted for his impeachment or conviction, including Alaska’s Lisa Murkowski and Wyoming’s Liz Cheney. The latter is also participating in the congressional committee investigating the 6 January uprising.

Conventional wisdom says that Mr Trump will only run in 2024 if he is sure he can win, which seems more likely as the deck is stacked in his favour.

His power could be undermined if his candidates lose out in the primaries, especially after he lost his bid to oust Mr McConnell. He also faces numerous legal challenges, though the GOP has agreed to pay some of his legal fees.

His recent rallies have been poorly attended, and according to a recent poll, 44 per cent of Republicans want him to run for president in 2024.

He may also be outpaced by his own movement as he was recently booed for promoting vaccination.

The point of no return?

In the end, the main question may be about whether the events of 6 January and their consequences are a sign that the country has reached a critical level of polarisation from which there is no return, even in the face of a common enemy like a pandemic.

The congressional investigation should not have much of an impact: 77 per cent of Republicans do not believe it will be fair and reasonable, and fewer and fewer think it is important for law enforcement to prosecute the rioters.

The real battle will play out in the ballot box.

What types of Republicans will win in 2022? Can traditional conservative Republicans like Liz Cheney win back the party? Even if Mr Trump were to disappear, there is the possibility that Trumpism still outlives him.

Many scholars and journalists have sounded the alarm about the threats to American democracy, including the threat of a simmering coup d’état, further political violence, and even civil war.

But there are other risks, including that of low electoral turn-out, which could lead to a less spectacular but more likely slow death of democratic institutions amid the generalised indifference of a population more concerned with immediate cultural, identity or economic issues than the fate of democracy.

Jérôme Viala-Gaudefroy is an assistant lecturer at CY Cergy Paris Université. He does not work for, consult, own shares in or receive funding from any company or organisation that would benefit from this article, and has disclosed no relevant affiliations beyond their academic appointment.