One year since exodus, what future for the Rohingya?

Some of those who fled Myanmar have tried to return, only to face torture. "There's still so much to do," say support workers. 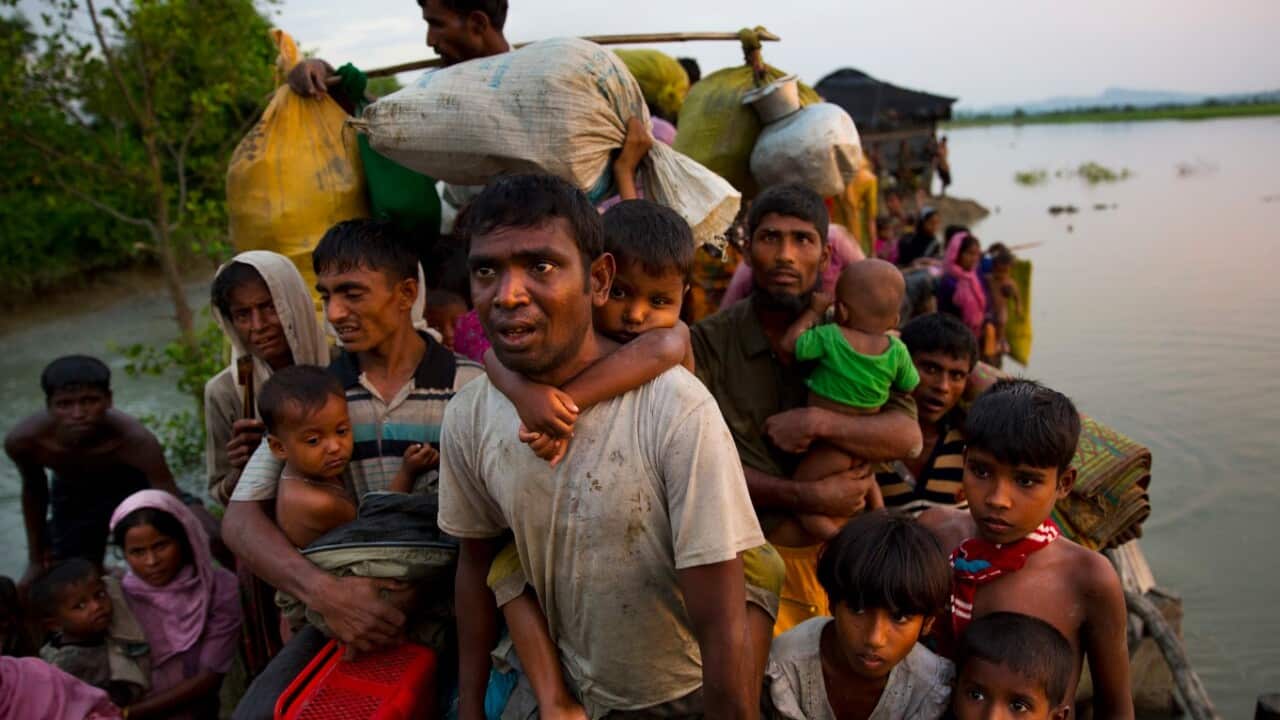 Rohingya Muslims carry their young children and belongings after crossing the border from Myanmar into Bangladesh. Some of them will be heading back. Source: AAP

This month marks one year since the start of what has been called "textbook ethnic cleansing" against
the Rohingya
in Myanmar, which forced 700,000 members of the minority group to flee into Bangladesh.

According to refugee advocacy groups, 12 months on, a resolution to the crisis is nowhere in sight.

Advertisement
"Several Rohingya who have returned to Myanmar have actually faced torture. They've been rounded up on their return, detained, sentenced to prison terms, then eventually pardoned."
Rohingya children in Bangladesh wait for their turn to collect meals. Source: AAP

A new statement from Human Rights Watch details the cases of the returnees and says the group was "presented to visiting journalists [in June] in an attempt to show that they were treating Rohingya well and that it was safe to return. Following the visit, the six fled to Bangladesh".

"The mistreatment reinforces the need for international protection, including United Nations monitors on the ground, before Rohingya will be able to return safely to Myanmar," it said.

What is Australia's involvement in the crisis?

Amnesty International Australia has used the first anniversary of the exodus to criticise the Australian government for its continued "support and assistance to the Myanmar military".

Australia will spend almost $400,000 in English classes and humanitarian training for members of the Myanmar military.

"Cutting Australia's training support to the Myanmar military is the least the Australian government can do to stand up for the Rohingya people's rights."

Julie Bishop, then-minister for foreign affairs, said in October 2017 "the Australian Government condemns the ongoing violence in Rakhine State. We continue to call for the protection of civilians and the unfettered access for humanitarian workers".

In April then-prime minister Malcolm Turnbull met his Bangladeshi counterpart to discuss the crisis and promised $15 million of humanitarian assistance in this year's budget.

"This additional funding will provide food to more than 700,000 people in Cox’s Bazar," he said.

"It will also support child protection services, and counselling and medical services for women and girls who have survived sexual and gender-based violence."

The Rohingya Muslims, a persecuted minority, are seen as illegal immigrants by the Myanmar government in a country with a 90 per cent Buddhist population.

Since the military-drafted 1982 Citizenship Law, the Rohingya are not officially recognised by Myanmar authorities and the stateless people have faced military crackdowns since the mid-1970s.

On 25 August 2017, a group of Rohingya militants carried out deadly attacks against a small number of Myanmar forces in Rakhine state.

Rohingya refugees walk from Myanmar to Bangladesh in 2017. Source: Getty

The Myanmar military responded with a widespread crackdown against nearly all the Rohingya population in the area.

Around 700,000 Rohingya fled into Bangladesh and now live in refugee camps. Most are crowded into makeshift bamboo houses with only plastic sheets to protect them from the elements.

Rohingya refugees gather near the fence in the "no man's land" between Myanmar and Bangladesh. Source: AAP

SBS News spoke to Donald Kazungu of Medecines San Frontieres (MSF) in Bangladesh, who was especially worried about the mental health of many of the refugees.

"The mental health problem is exacerbated by various factors; the fear for their security, and all this uncertainty of being unrecognised by both sides," he said.

MSF said it had provided more than 650,000 medical consultations in its 19 health facilities in the camps, but it is not enough.

"No single organisation can provide holistic care. There's still a lot of work to do as we continue with the current services and try to do more. It's good to tell the world there's still so much to do for Rohingya people," he said.

Yunus is a Rohingya man who now lives in Melbourne. He left northern Rakhine state eight years ago and told SBS News he suffered at the hands of Myanmar's military.

"Sometimes they ask for money and if you don't have, they beat you and they kick you, they are doing like this for many years," he said.

Yunas at a Rohingyan-run restaurant and cafe in Springvale, Melbourne, where the 27-year-old has settled. Source: Chris Hopkins

Yunu's mother stayed behind, now she along with several other family members, remain stuck in Bangladesh.

"I'm worried because they have to sleep on the floor, there is cold weather, now it 's rainy season, monsoon, they can't go anywhere, they can't do anything."

He and his family are now the subject of world-first live Instagram documentary
She Called Me Red
.

A deal was signed between Bangladesh and Myanmar last November and another between the UN and Myanmar in July. They were supposed to safeguard the return of hundreds of thousands of refugees but the UN has refused to comment on details of the deal.

For both Yunus and the hundreds of thousands of Rohingya in Bangladesh, the future remains as uncertain as ever.