The Victorian premier says unvaccinated tennis players won't be granted an exemption to enter the state from overseas to take part in the Australian Open, even if they spend two weeks in hotel quarantine. 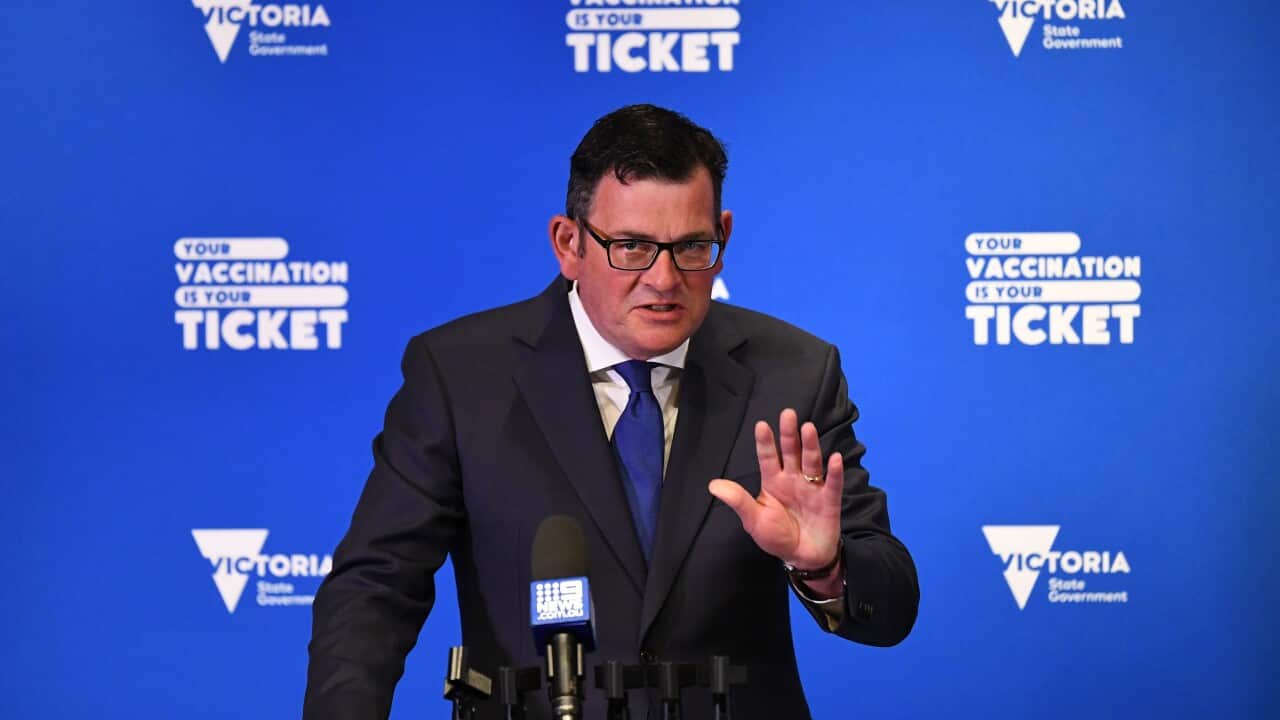 Victoria will not seek exemptions for unvaccinated tennis players to enter the state from overseas to take part in the Australian Open, putting Novak Djokovic's participation under a cloud.

"What I want to make very clear is that the state of Victoria will not be applying for any exemptions for unvaccinated players," Premier Daniel Andrews told reporters outside parliament on Wednesday.

"I am not going to ask and require people sitting in the grandstand, people working at the event to be vaccinated while players aren't. We're not going to be applying for an exemption."

His comments come after Prime Minister Scott Morrison flagged the possibility of unvaccinated players being able to travel to Australia for the January tournament, provided they complete 14 days of hotel quarantine.

"If there is a special exemption that is warranted for an economic reason ... that can happen, but you have to follow the health rules in that state," he told the Nine Network.

"Two weeks quarantine for unvaccinated people, that is sensible."

Mr Morrison said while there were clear rules requiring Victorians to be vaccinated to take part in economic activity, "there needs to be a little bit of flexibility".

"We want major events in this country, a lot of jobs depends on it. We want Australia to show to the world that we are open," he said.
Serbia's Novak Djokovic holds the Norman Brookes Challenge Cup after winning the men's singles final at the Australian Open in Melbourne, 21 February, 2021. Source: AP

Mr Morrison's comments contradict those made by his immigration minister Alex Hawke, who last week said athletes would need to be double-vaccinated to enter the country.

"I was perfectly supportive of Minister Hawke's view, which I took to be the view of the federal government and it appears that is not the case," Mr Andrews said.

"The federal government has done a complete 180."

It is possible another state can apply for an exemption to allow an unvaccinated player to quarantine there.

But Mr Andrews said they would still not be able to compete in the Australian Open, given unvaccinated people will not be allowed at Melbourne Park where the tournament is held.

"I don't think it would be very fair to have ten of thousands of Victorians and others who come here because they are vaccinated queuing up to get the green tick to get into Melbourne Park and having other players who are not vaccinated just walking straight in," he said.

A vaccination mandate also came into effect in Victoria on 15 October, which includes professional athletes.

World No.1 Novak Djokovic has repeatedly refused to reveal whether or not he has received a COVID-19 vaccine and last week flagged he was unsure whether he would return to Melbourne to compete for his 10th Australian Open title.

Mr Andrews said "certain high-profile people who choose not to be vaccinated" were making the wrong choice, noting about 95 per cent of Victorians in intensive care battling the virus were unvaccinated.

Almost 92 per cent of Victorians aged 16 and over have had at least their first dose of a COVID-19 vaccine while 76.5 per cent are fully vaccinated.