South Korean pastor Jong-rak Lee has been taking orphans in via a specialised 'baby box' attached to his church since 2009. But is the ability to anonymously abandon infants helping or hindering the plight of the country's unwanted young? 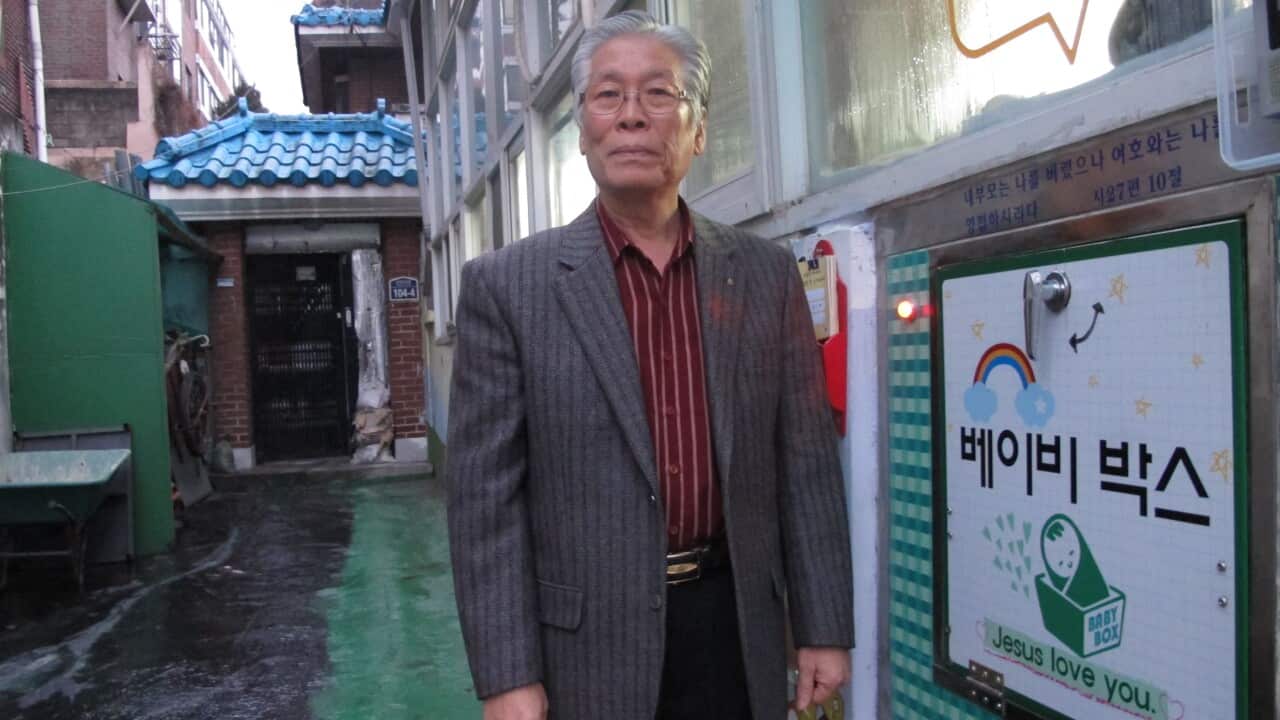 Pastor Lee Jong-rak Lee outside the 'baby box'. He says it prevents women from killing their babies and stops abandoned children from dying on the streets.

At the top of a steep hill in a suburban area in Seoul, South Korea, a small box in a wall is stirring controversy about child abandonment and human rights.

The baby box’s creator is Pastor Jong-rak Lee. He says it prevents women from killing their babies and stops children from dying on the streets after being abandoned.

But while the baby box concept has been widely praised, opposition to it is growing. Some organisations in South Korea argue that it violates human rights and more should be done to address the cause of child abandonment.

Advertisement
Pastor Lee built the box in 2009 to allow parents to anonymously abandon their children.

Caregivers leave their child without official records of when they were born, who the parents are or why they are being abandoned. This compares to formal relinquishment where parents officially renounce their parenting rights and consent to the adoption of their child.

Since December 2009, 383 children have been left in the baby box, from newborns to a three year-old – he was too big to be placed in it and was left on the doorstep.

The children stay less than a week at the pastor’s home and are transferred to an orphanage following medical checks.

The children will most likely live at orphanages until they turn 18 or 19. They cannot be adopted internationally because they haven’t been formally relinquished and Pastor Lee said it is not common for them to be adopted in South Korea.

Around 120 parents have returned to the baby box to reclaim their child.

Jane Jeong Trenka, president at the Truth and Reconciliation for the Adoption Community of Korea (TRACK), which advocates for human rights for adoptees, children and their families, has several concerns with the baby box.

She believes birth registration – which abandoned children do not have – is a human right.

Trenka also disputes the argument that the baby box stops women from killing their children. She has carried out research that showed infanticide in South Korea has remained unchanged since the baby box.

'[The women who kill their children] have some serious mental issues at the time. They can be psychotic, they can be in denial of their pregnancy and so this number of women who this happens to doesn’t change,' she says.

While Pastor Lee says he provides counselling to some people at the baby box, Trenka says he should be doing more.

She says mothers are not aware their children will most likely grow up in an orphanage. Trenka, a Korean adoptee, also says parents should be educated about what abandonment might mean for their children.

'Nobody is sitting down and telling them ‘this is what it means to be an adoptee who’s wandering around Seoul not being able to find your parents',' she says.

'Or 'this is what it means for you after you give up this child and there’s no way to trace you and you become depressed later, as a lot of those birth mothers do, and you have no way to find your child'.'

The system needs to change

Pastor Do-hyun Kim, who has been running Koroot – an adoptee guesthouse – for 10 years, believes the baby box it is a system that disconnects children from their parents.

He says the system of anonymity needs to change to encourage people to consider a broader range of options.

Pastor Lee says he has identifying information about parents for around 40 per cent of the baby box children. He says he retains the information if the children want to find their parents in the future, but he does not provide it to police to protect the parents’ anonymity.

However, Pastor Kim says providing the information to authorities would force people to consider other options.

'What kind of system you have is a message to the people [on how to] act and behave. If the system is different from this, then people’s reaction will be different,' Pastor Kim says.

KUMFA – the Korean Unwed Mothers Families’ Association – provides support to unwed mothers in South Korea and advocates for their rights. Mok said the debate should be focused on how to maintain a family unit and address why unwed mothers feel they cannot raise their children.

'It’s because these women don’t have a place to go with their children,' she says. 'It is true that the baby box is sustaining life, but it is a fallacy and error to say that it is resulting in happy children.'

KUMFA, TRACK and Dandelions – an organisation of families whose children have been adopted – are now working together on a project called Think Outside the Baby Box.

They will provide information on legal choices for pregnant and unwed mothers in crisis at a location near the baby box. Counselling will be provided by unwed mothers raising their children in South Korea.

Women will be able to visit the centre anonymously and Trenka said they will not prevent people from putting their children in the baby box if they wish.

Pastor Lee has hit back at the opposition. He says critics haven’t been on the 'frontline' and dealing with the issues involved.

'People claim that I’m providing an atmosphere for parents with unwanted babies to easily discard them – they really don’t know what they’re talking about,' he says.

'I really think most of the people who are opposing me are doing so because they’re uninformed about what’s going on.'

Pastor Lee is now planning to build a A$2.4 million facility north-west of Seoul at Ilsan. He will install another baby box at the property, which will house his nine adopted disabled children. Other disabled children abandoned at the baby box will also be able to stay there temporarily and he will remodel his current premises to house more babies.

Pastor Lee is seeking approval for both properties as a temporary protection centre where babies will be able to stay for six months until they are sent to adoption agencies or orphanages.

In the future he wants to expand the facility, with a section for unwed mothers to stay after they’ve given birth. The church will provide counselling on whether to keep their child and if they wish, mothers will be able to anonymously abandon their babies.

Pastor Kim says he has concerns with the proposed facility, with Koroot calling for input from child welfare professionals, researchers and service providers.

'I think that the Ministry of Health and Welfare and the local government have to intervene in his plan. What he has been doing with the baby box is not justified and clarified enough in Korean society yet,' he says.

To date, the local and federal government has asked Pastor Lee to close the baby box.

Se-Hee Lim, deputy director of the Department of Child Welfare Strategy in the Ministry of Health and Welfare, told SBS Australia the baby box is an illegal facility that 'aggravates child abandonment', which is a crime in South Korea.

Hundreds of babies are abandoned each year in South Korea, prompting Pastor Jong-rak Lee to build a special baby box for them to be left in.

Gwanakgu district office, the local government responsible for the area the baby box is located in, says it has asked Pastor Lee several times to close it – verbally and in letters.

'From the perspective of the nation, we can’t just allow this system where it not [only] encourages but allows parents to … give up their babies like this,' Mi Jang, head of the Children and Teenager Centre at Gwanakgu district office, says.

But Jang says there is no legal basis for a forced shutdown of the baby box and Pastor Lee has not responded to its requests.

'In order to solve this problem of parents giving up their babies, looking at it from a broader perspective, the baby box isn’t the solution,' she says.

Stephanie McDonald is a Seoul-based freelance journalist. She is a Korean adoptee, has previously stayed at Koroot as a paying guest, and volunteers through Dandelions to teach English to birth parents whose children have been adopted overseas.